Fade to Black Rise and fall of ISIS

This work of Ricardo is the result of nine years of chasing the Islamic State and its rise and fall of it, in the three countries that formed it: Syria, Iraq and Libya and in the main battles for its three capitals in Raqqa, Mosul and Sirte.

“It’s Better to Die Standing Than to Live on Your Knees.” This quote attributed to Emiliano Zapata during the Mexican Revolution, to Dolores Ibárurri during the Spanish Civil War and to Che Guevara during the Cuban Revolution never stops to amaze Ricardo.

On one of Ricardo’s recent trips to a Syrian prison, he met again with two of the alleged members of “The Beatles” (the quartet of executioners and guards of 21 Western hostages, including himself together with Spanish journalists Javier Espinosa and Marc Marginedas), who became a media sensation because of the murders of James Foley, Steven Sotloff, Peter Kassig, David Haines, Alan Henning and Sergei Gorbunov. Sergei, who died in anonymity, was “lucky” enough to be killed with a bullet to the head instead of being decapitated alive. 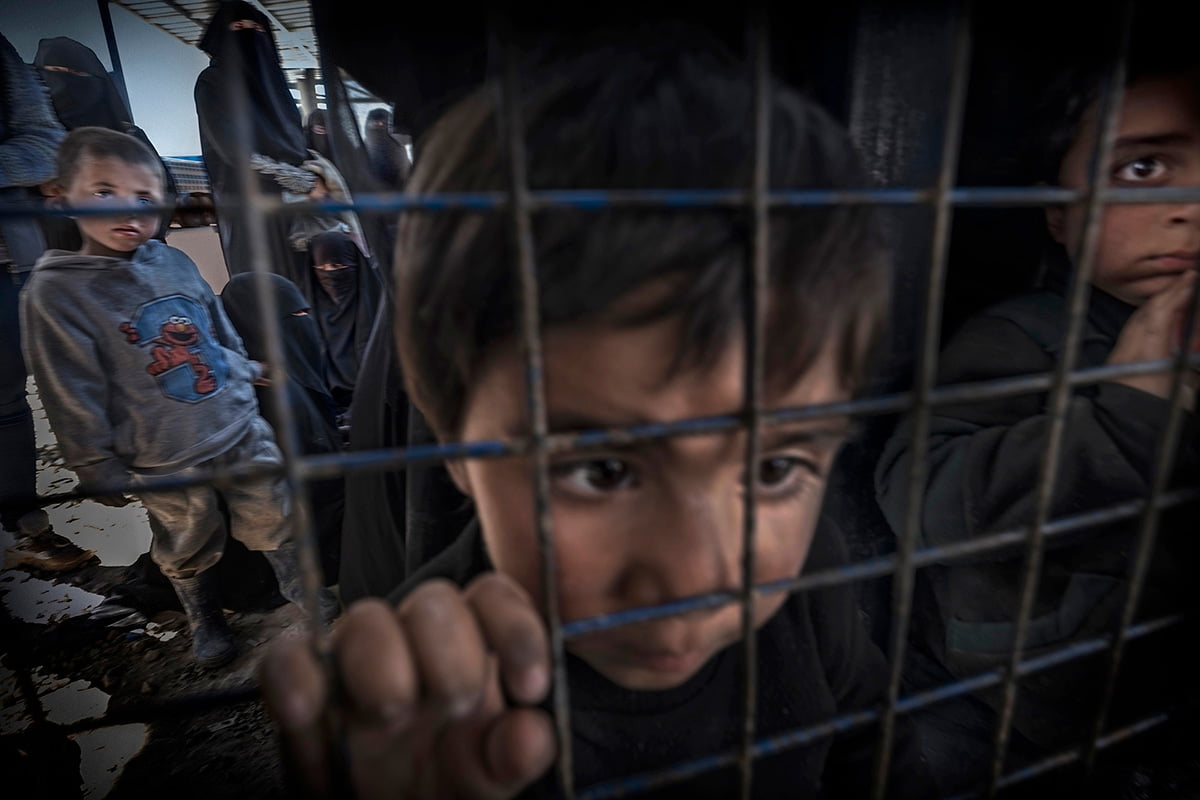 A boy looks through a closed fence in the camp of Al Hawl, Syria, on 9 March 2020.⁣ ⁣ According to Doctors Without Borders, as numbers of patients with COVID-19 grow in northeast Syria, the pandemic is having a knock-on impact on other health services in a region where some 700,000 people are displaced from their homes and the majority of them relies on humanitarian assistance. As of 24 August, there were 394 confirmed cases – nearly a fifth among health workers. Testing is limited, health services are scarce, and access to water and sanitation is poor.⁣ 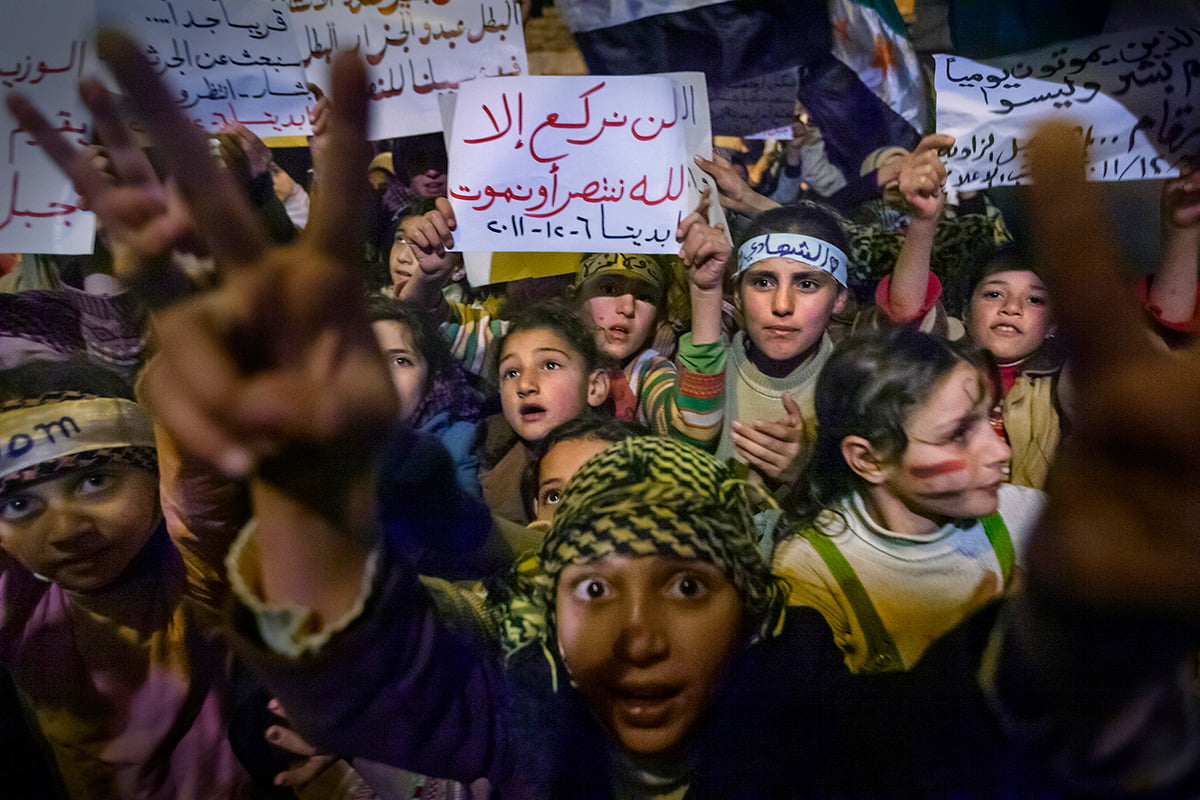 At the first protests, in this case in Jawal Zawiya, only children could be photographed because they couldn’t be identified. Adults were afraid of the regime’s fearsome mujarabat (intelligence services). The signs were in Arabic, as between 2011 and the middle of 2012, there were practically no Western journalists in the country (Syria, 2013).

It speaks of volumes that two of the men who were supposed to be elite soldiers, tried to stay alive at any cost and did not have the courage to die in the manner they supposedly decided “to live”: without fear of death.

Now that ISIS has lost its three capitals and all the territory it had managed to hold onto in the area of Deir ez-Zor, with the fall of the last enclave in Al-Baghouz they have lost the legitimacy to call themselves Islamic State. How ISIS will evolve is an enigma for security forces, for analysts, for the civilian population that it victimizes and probably for the militants themselves. 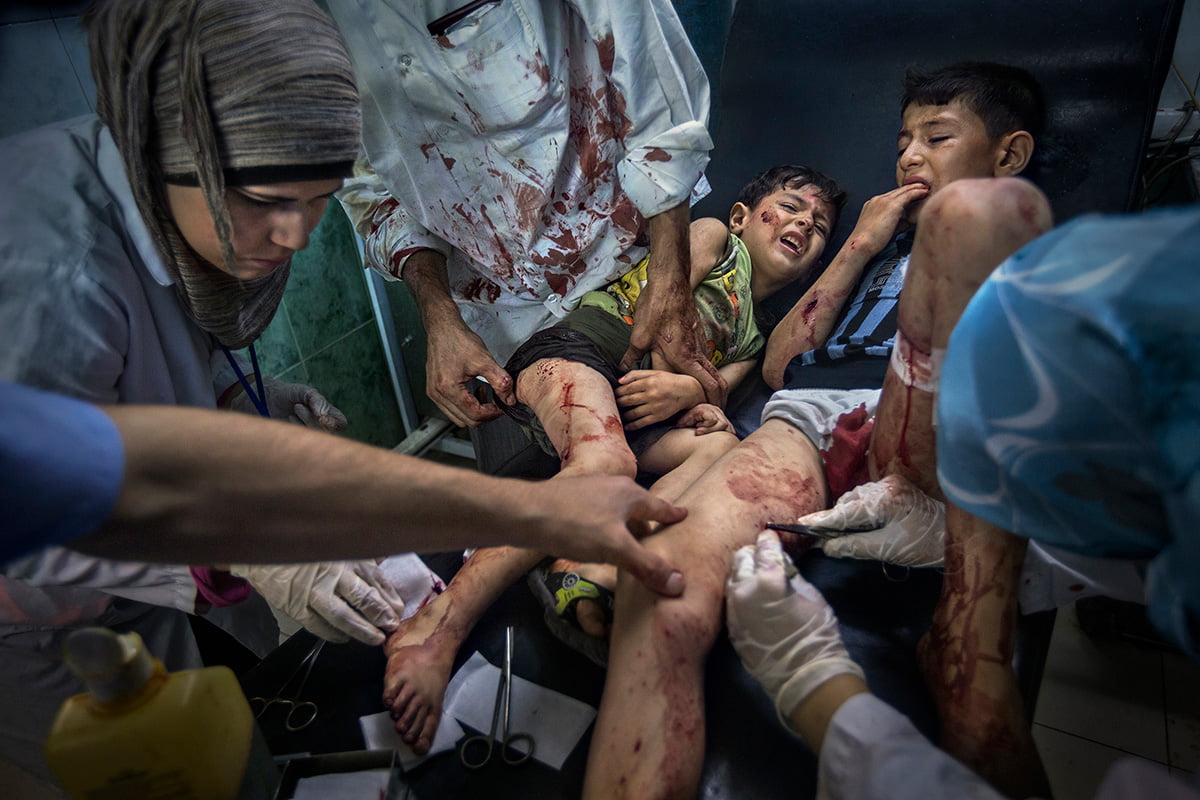 The city of Aleppo suffered the worst recorded attack against civilians, on August 16. Assad’s army bombed three bakeries where people stood in line to buy bread in the early morning hours as well as several houses. As a result, they killed 50 people and left 197 wounded. Many of the injured and dead were children. Two brothers are being treated for shrapnel wounds at Dar Al Shifa Hospital between Al-Shaar and Tariq al-Bab districts (Syria, 2012). 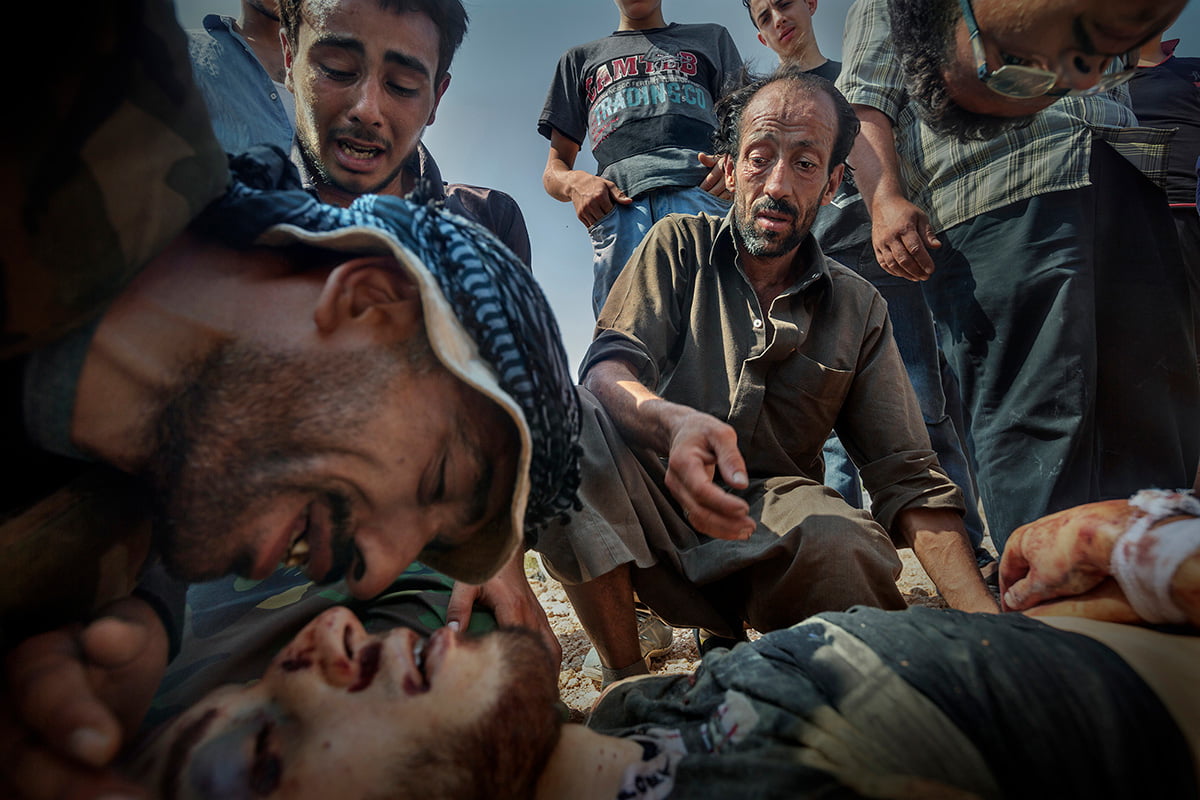 A father cries over his son killed by a government helicopter, at a cemetery on the outskirts of the city. The victim’s brother cries with him. He was trying to save a child wounded by a helicopter and the helicopter fired, killing them both. Aleppo (Syria, 2012).

This work of Ricardo is the result of nine years of chasing the Islamic State. It is the rise and fall of it, in the three countries that formed it: Syria, Iraq and Libya and in the main battles for its three capitals in Raqqa, Mosul and Sirte, in addition to others that marked the beginning of the end as that of Kobane or Sinjar and the final battle of Baghouz in March of the same year.

ISIS sowed death and destruction, resulting in hundreds of thousands of victims. This is its story. 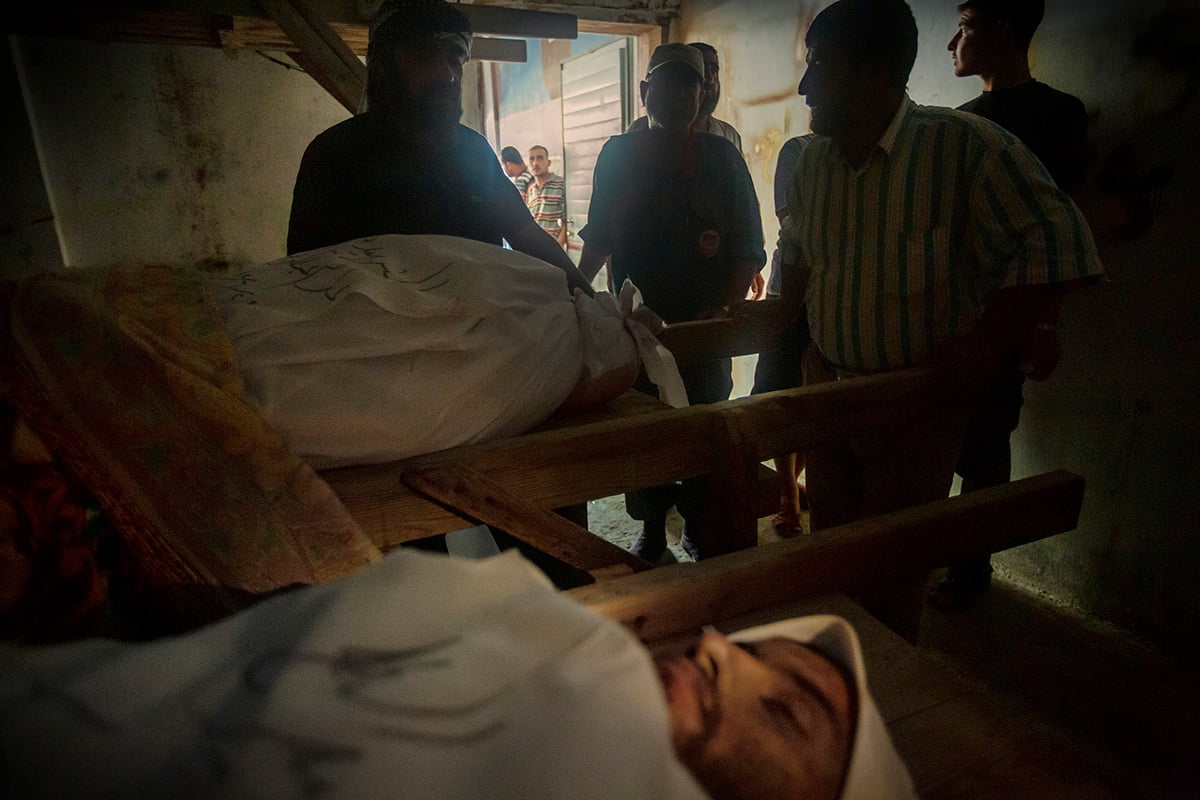 In Al Qasir, where there is no hardly enough time to bury the dead because the city is constantly being shelled, bodies are amassed in private homes used as temporary burial chambers waiting to be in Teradata later date (Syria,2012). 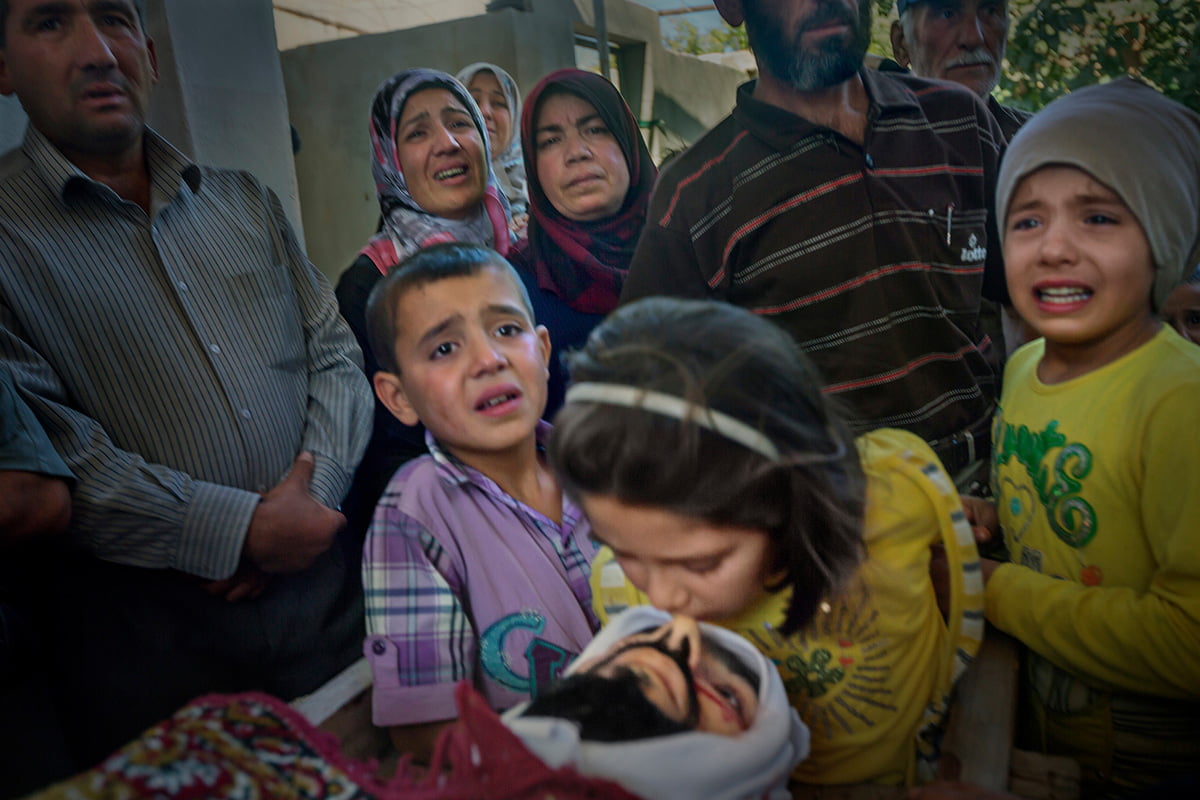 A 5-year-old girl kisses the corpse of her father, Khaled Kasem Aleiter, killed today by a mortar shell that fell while he was crossing the street in the city of Al Qasir. His other two children and his wife cry over their loss (Syria, 2012). 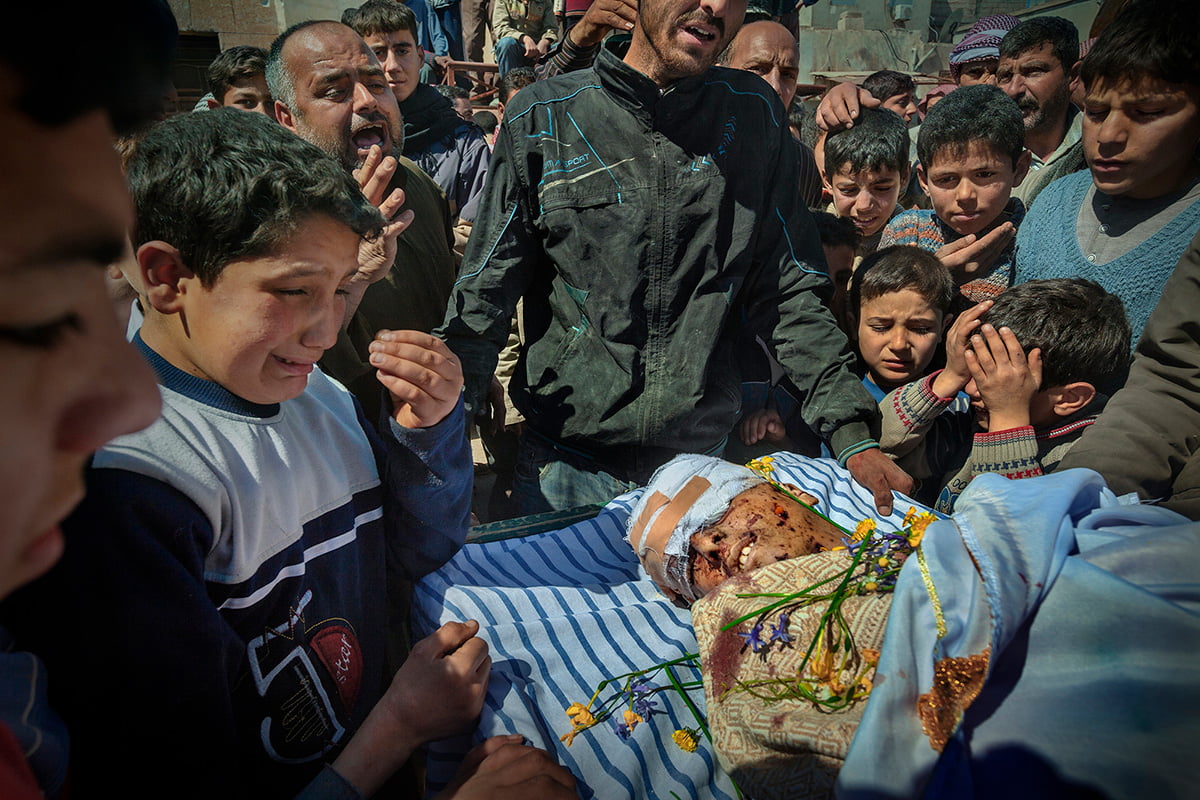 Ahmad Benmushen Qaruosh, 13 years old, died Thursday from the bombing by Assad’s troops in Sermen, Idli b province. Shrapnel from a tank Shell riddled his body. His grief-stricken brother weeps alongside him (Syria, 2012). 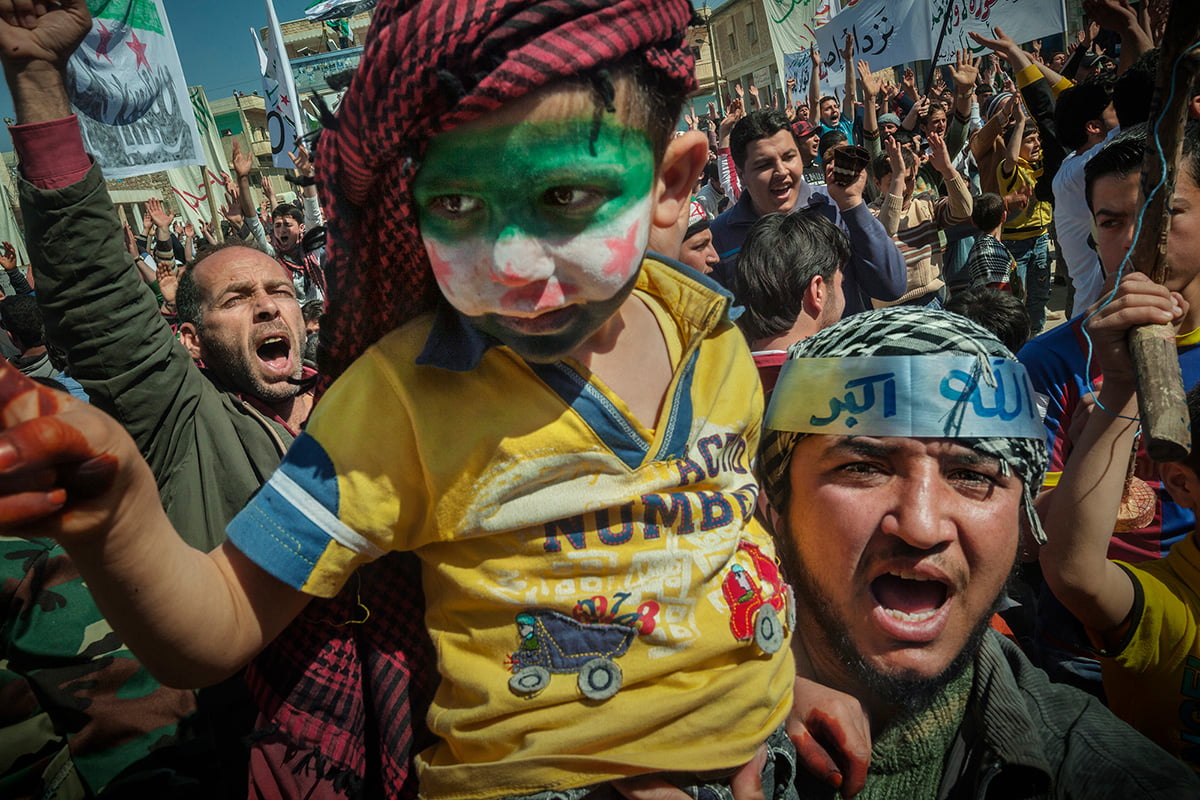 Protest in Binnish (Idlib province ) after the attack the previous day against the civilian population. Only around 1,000 people are mainly in the city (normally 6,000 live there). The rest left Binn is hovering in fear of another attack (Syria, 2012). 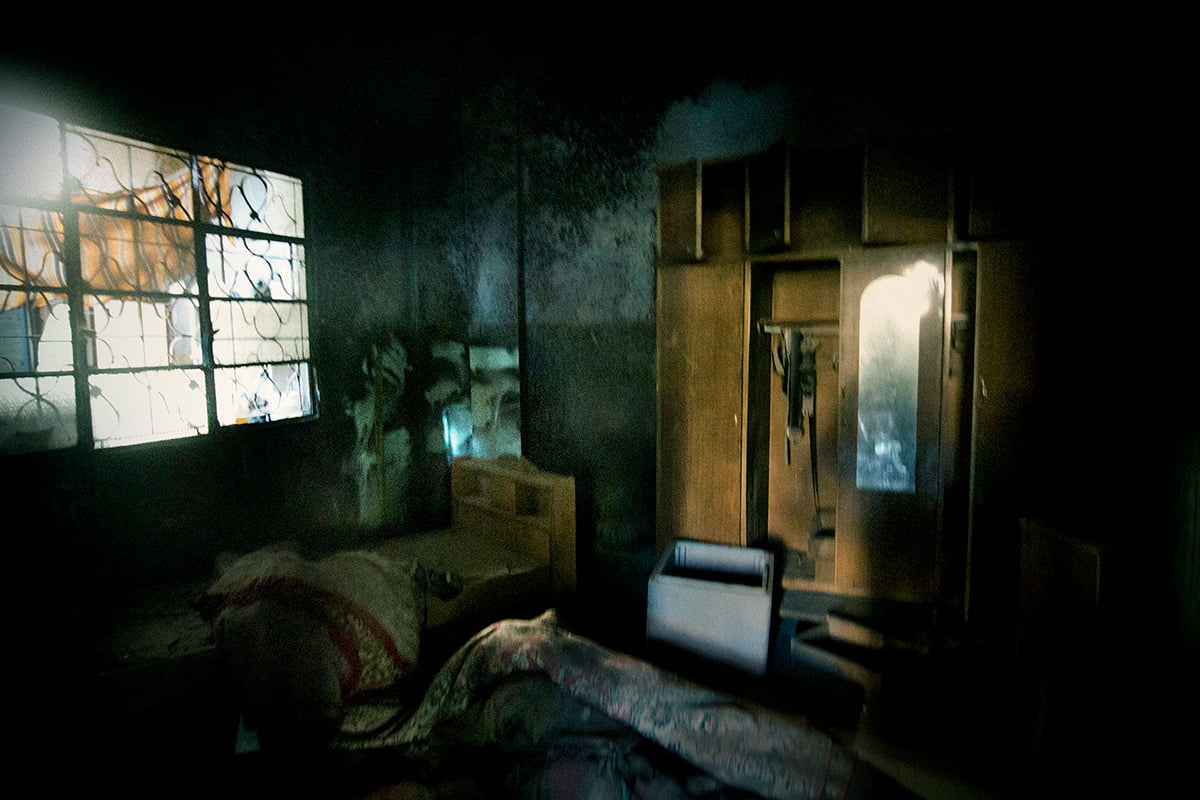 The inside of an abandoned home in Deir ez-Zor. This city was already divided by checkpoints that separated it into different zones controlled by the Free Syrian Army (FSA), Jabath al-Nusra (Al Qaeda in Syria) and ISIS. The other half of the city was under the control of the Assad regime (Syria, 2013). 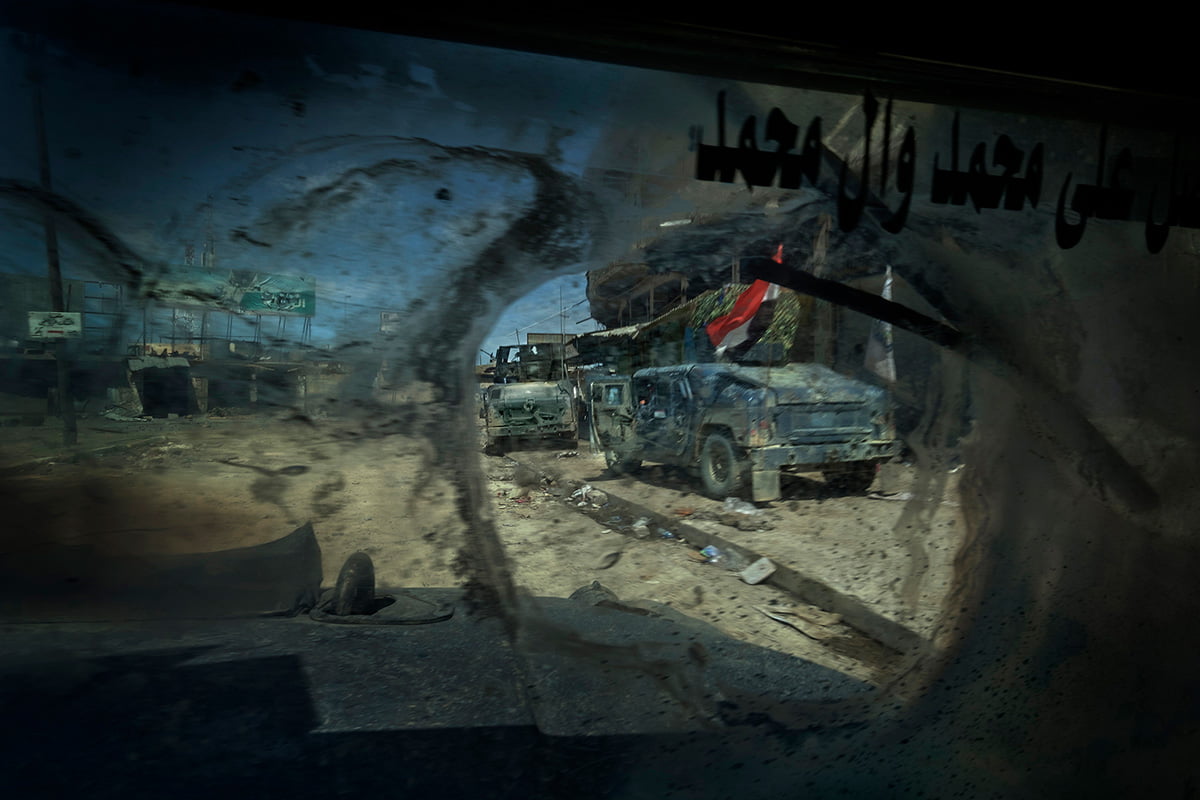 Humvees of theFederal Police (elite units of the Iraqi Security Forces) during fighting against ISIS on the most advanced front line position, in Mosul (Iraq, 2017). 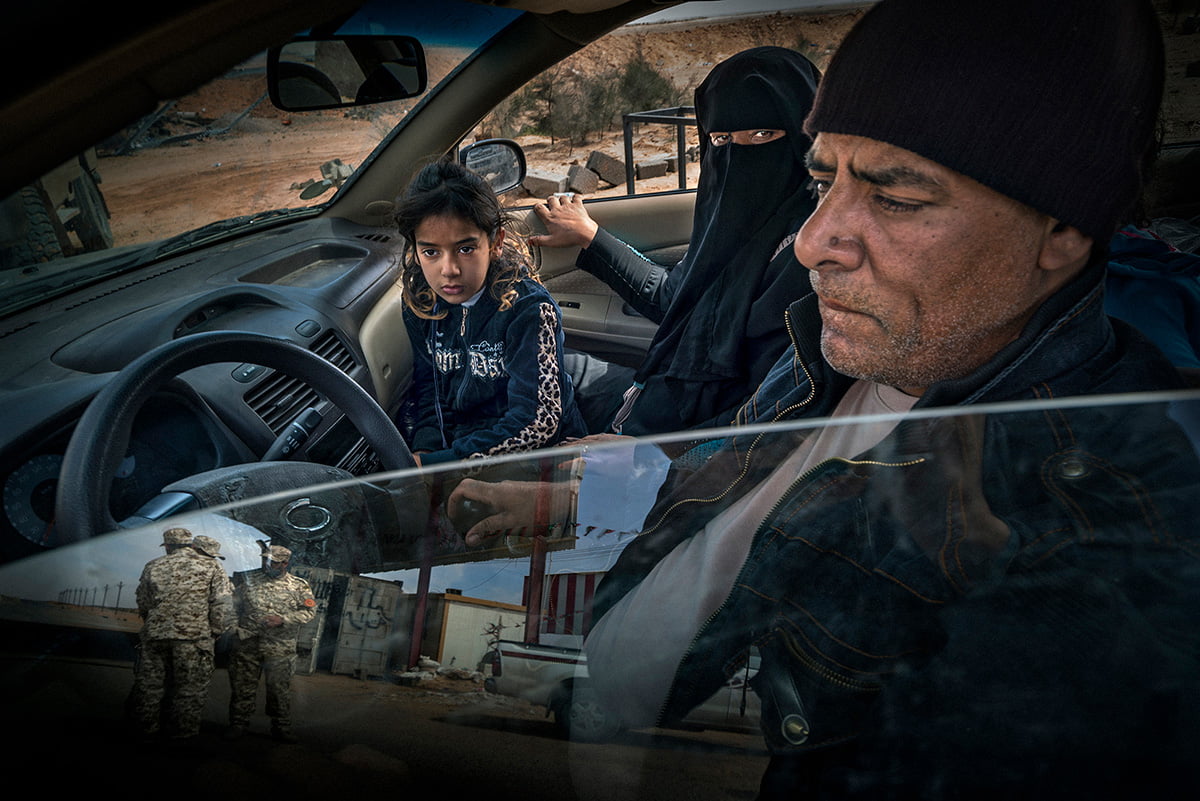 Family in a car from Sirte, at that time under ISIS control, at a military police and Brigade 166 checkpoint in Abu Grein. ISIS had launched a coordinated attack there involving the Al-Bagla checkpoint that signalled the beginning of the Sirte campaign (Libya, 2016). 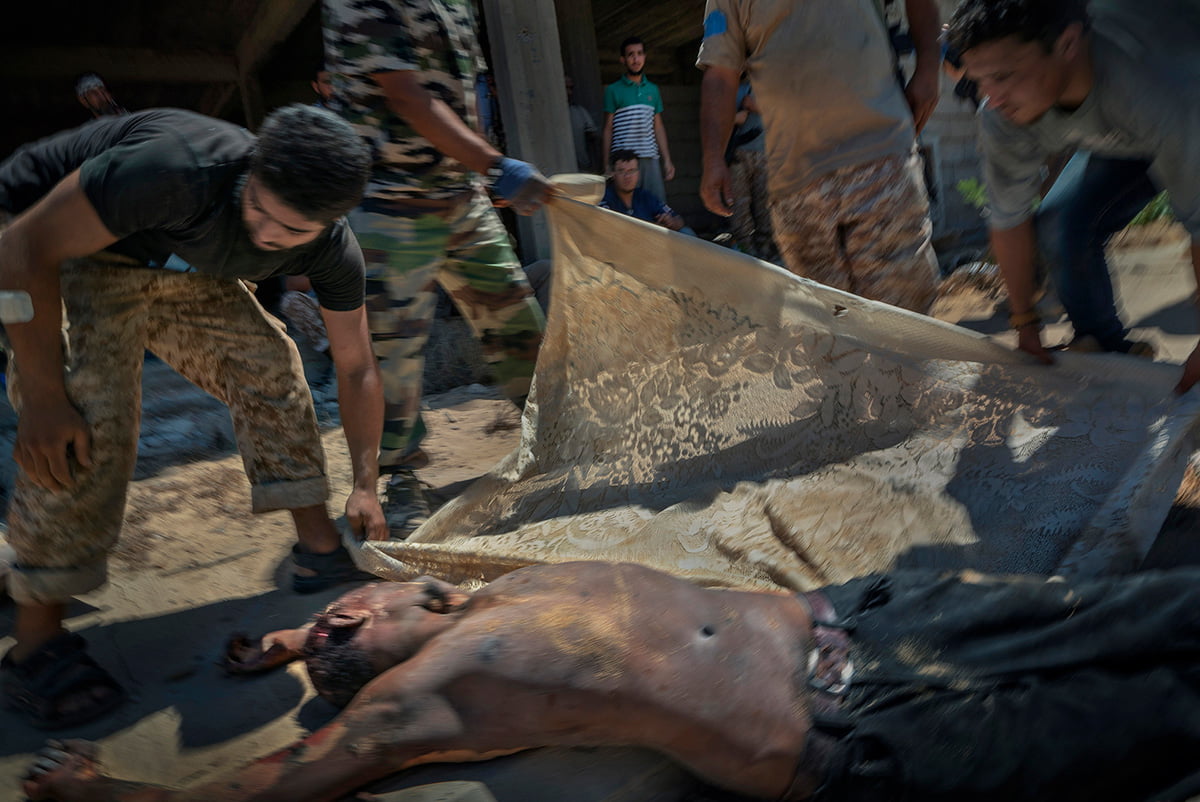 Fighters of the Government of National Accord (GNA), an interim government endorsed by the United Nations, covering the corpse of an ISIS militant in District 2. A large number of sub-Saharan Africans were among the ranks of ISIS in Sirte. Many of them neither understood Arabic nor, as a result, could read the Koran (Libya, 2016). 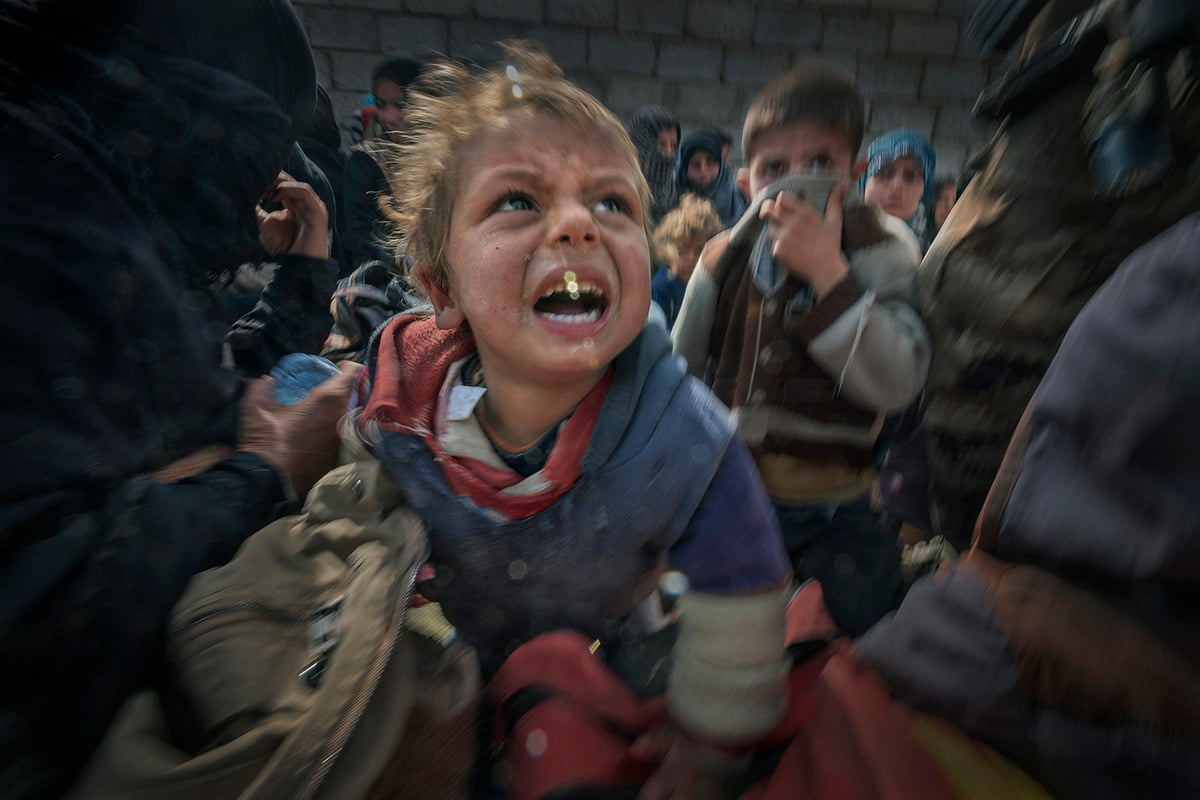 Children who just escaped from Qaryat Tall ar Rayyan at the gates of the city of Mosul, the scene of intense fighting between the Iraqui Special Operation Forces, known as Golden Division (elite units), and ISIS, along with 2,000 others in a provisional refugee camp while waiting to be transferred to Hammam al-Alil refugee camp (Iraq, 2017). 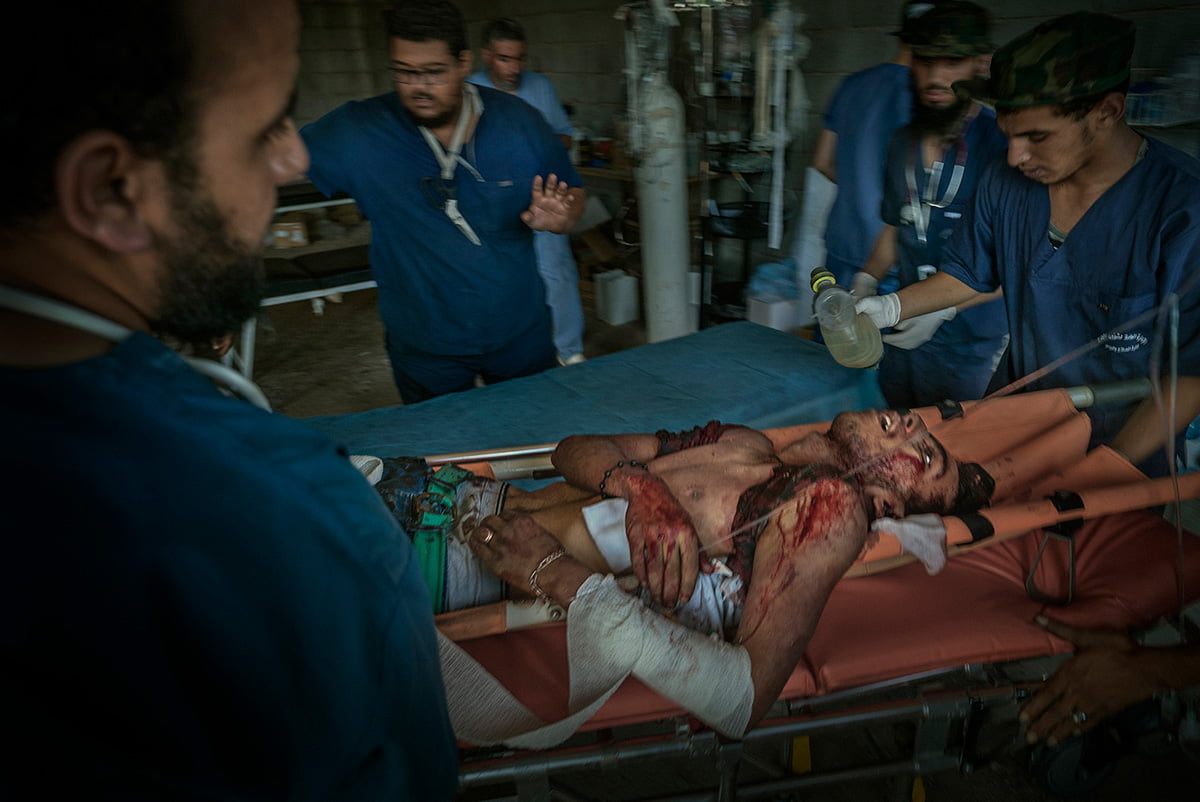 A soldier of the Government of National Accord (GNA) at the time of his death caused by the explosion of a DOGMA (ISIS suicide car bomb) in a field hospital during the battle of Sirte (Libya, 2016). 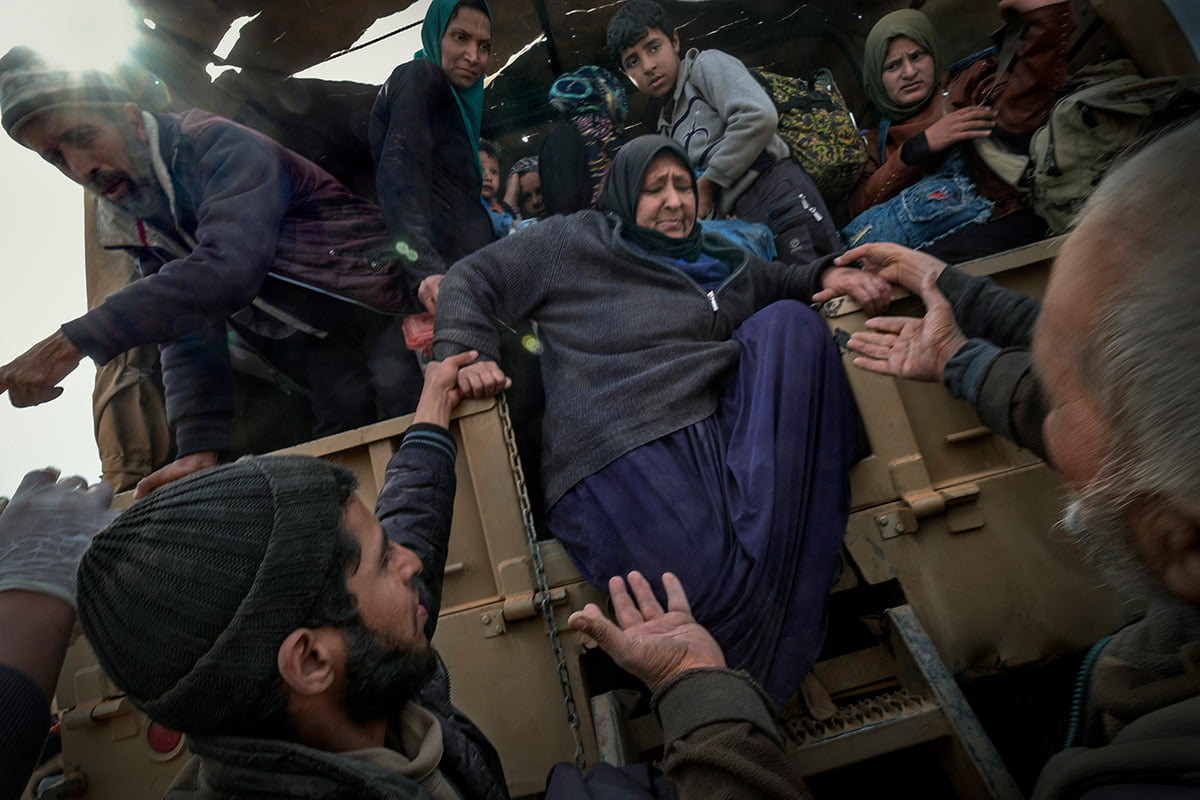 Refugees able to escape from ISIS during intense fighting against the Iraqui Special Operation Forces, known as Golden Division (elite units), at the Mosul gates are picked up at the halfway point by trucks and transported to a secure area (Iraq, 2017). 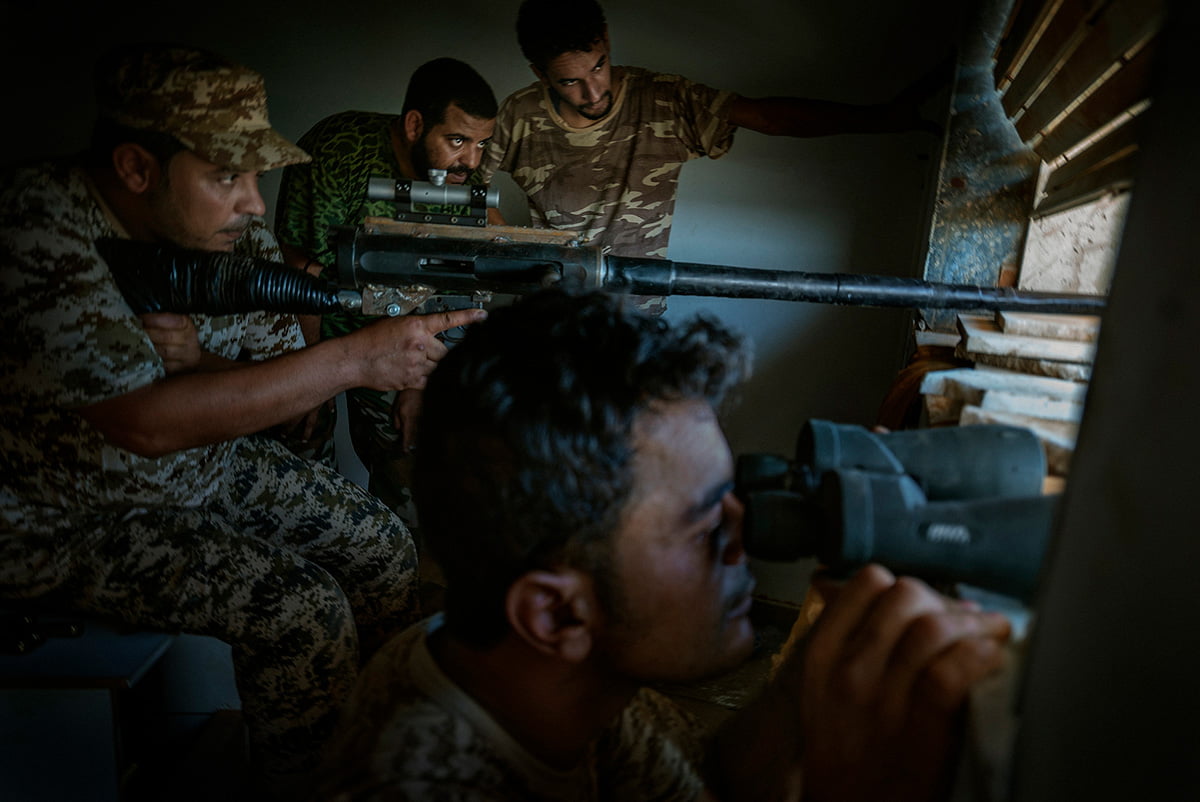 A sniper of the Government of National Accord (GNA) with a homemade rifle fitted out with a DShK barrel (DUSHKA, an anti-aircraft-heavy machine) fires at ISIS positions in Sirte (Libya, 2016). 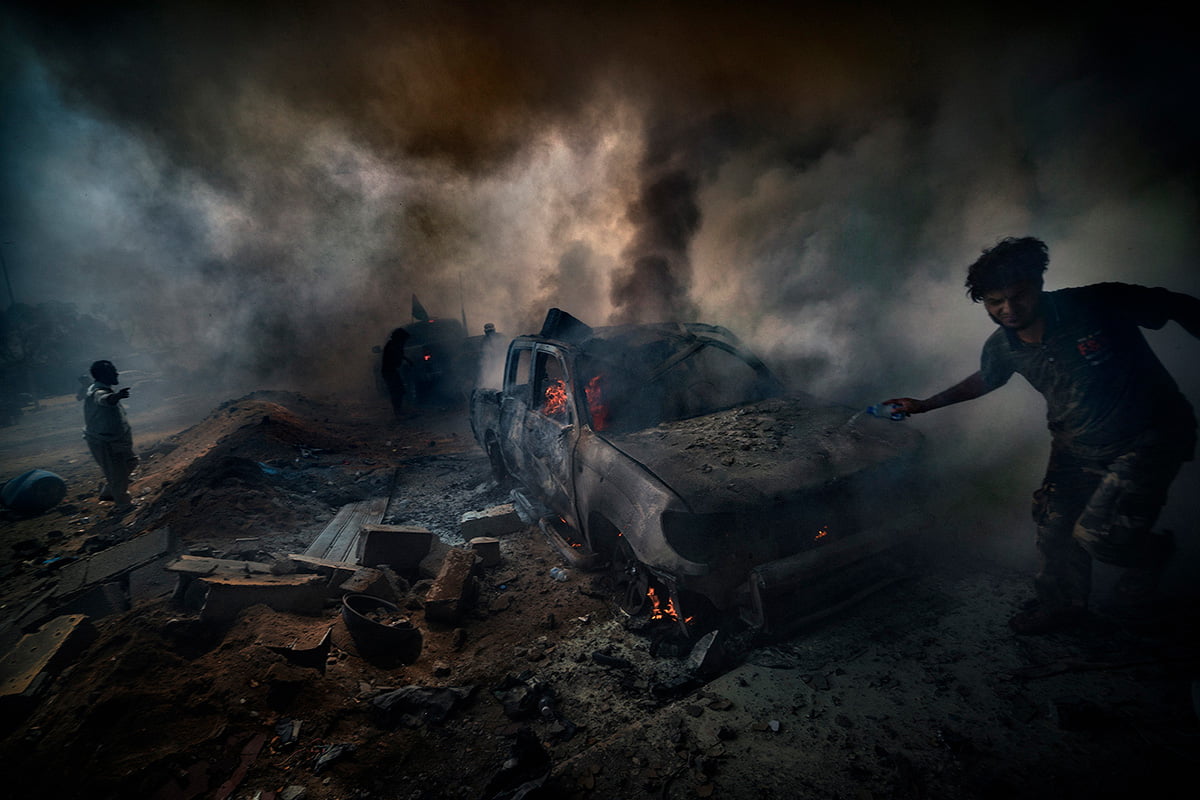 Two ISIS car bombs (DOGMA) with two families inside detonated in Sirte, leaving 12 combatants dead and 60 injured. A third car bomb was sent but was stopped just before its arrival. Official estimates indicate that the number of dead during the offensive was around 500. In all, 87 DOGMAs (suicide car bombs) exploded in the final weeks of the war (Libya, 2016). 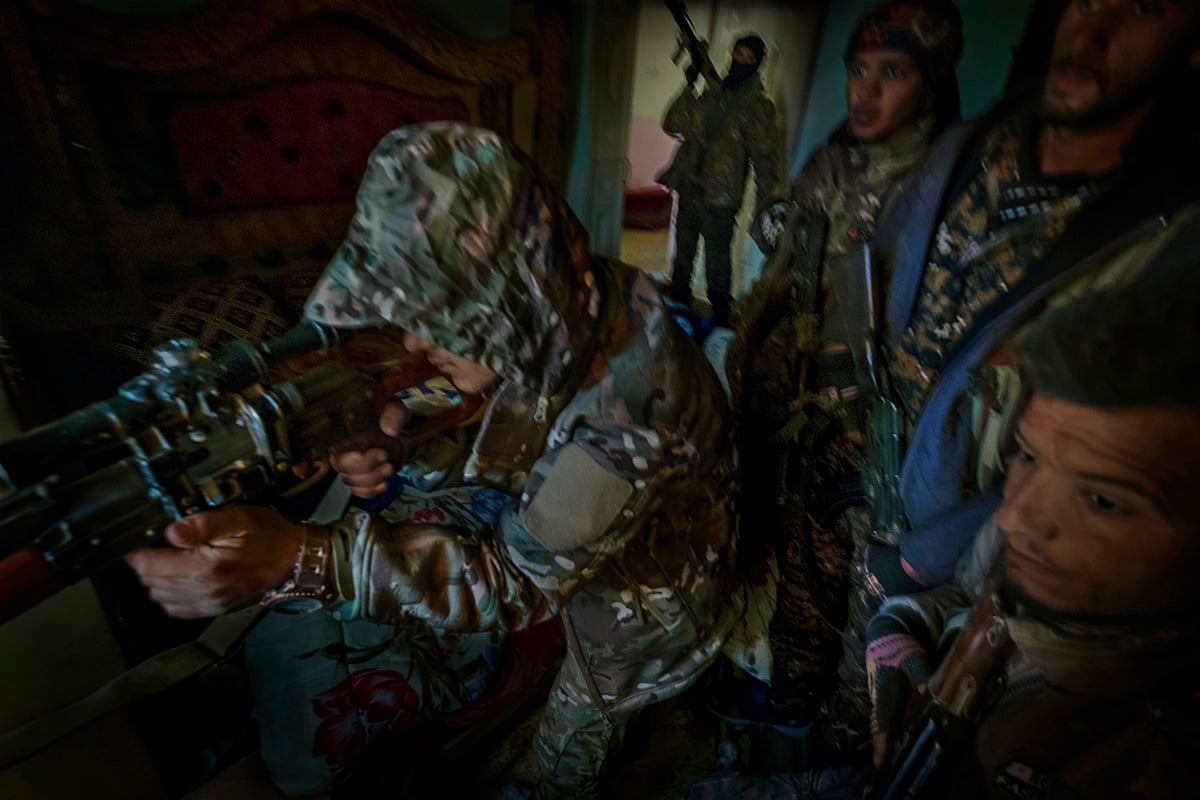 Members of the Syrian Democratic Forces (SDF) with a sniper, in a position in a house on the front lines in Deir ez-Zor, during the last battle and the final collapse of the ISIS caliphate. The SDF was created in October 2015, and are a military alliance of Kurdish, Arab, Assyrian, Armenian, Turkmen and Circassian militias (Syria, 2019). 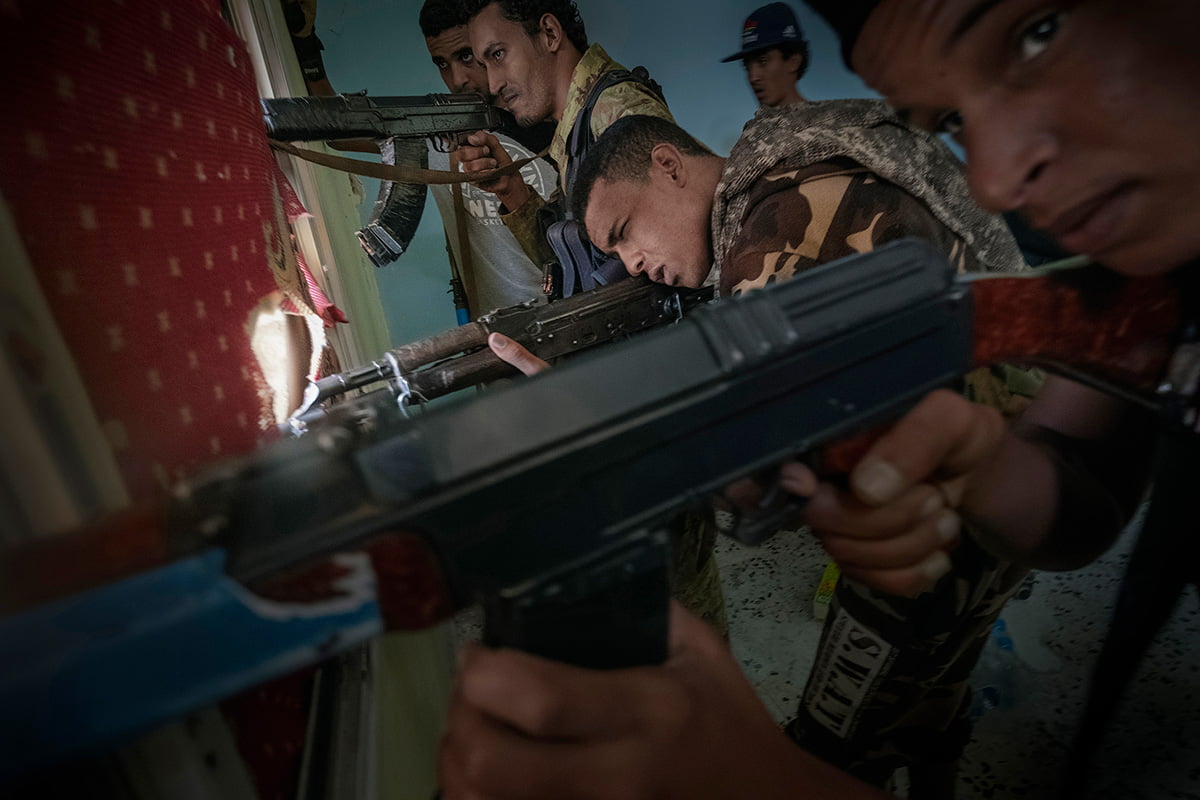 Soldiers of the Government of National Accord (GNA) fire at ISIS jihadists during fighting in Sirte (Libya, 2016). 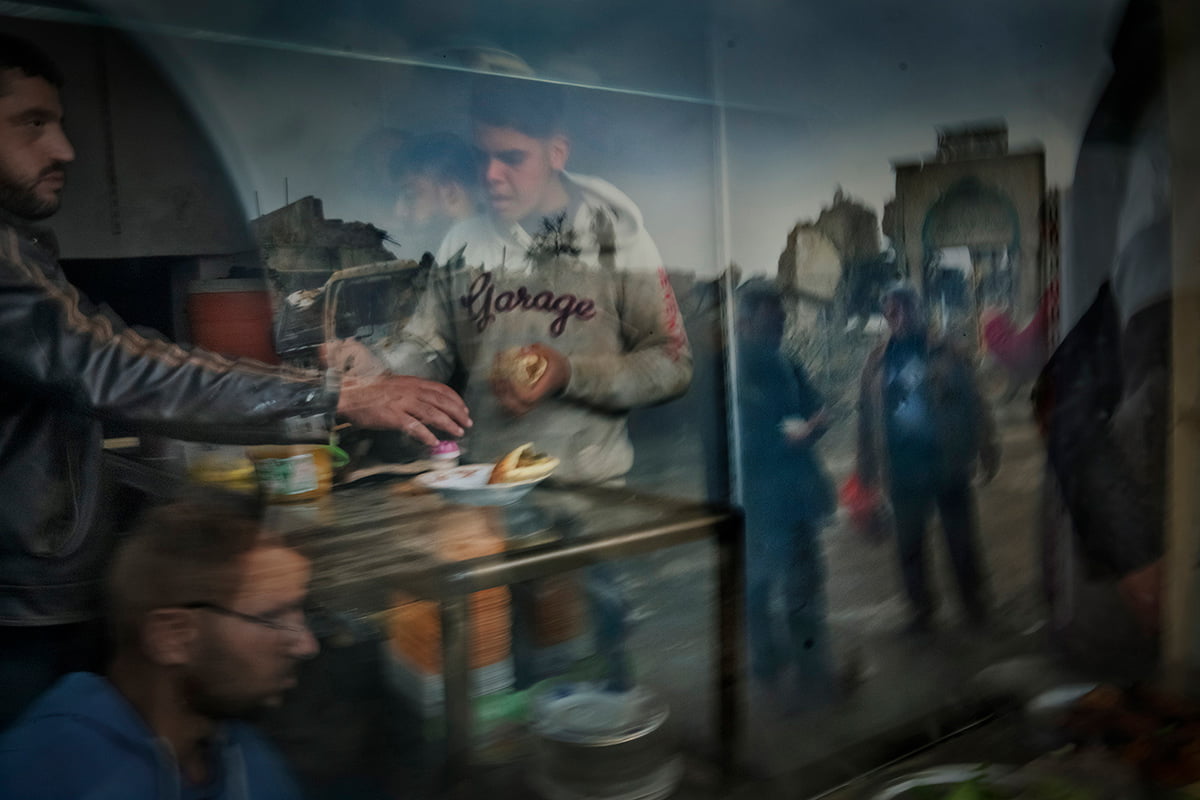 A kebab stand in front of the door of the destroyed Al-Nuri mosque where Baghdadi declared the caliphate in 2014 (Iraq, 2018). 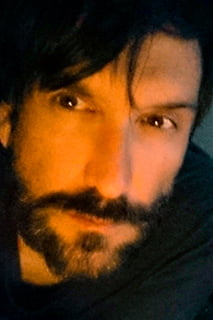 A freelance photographer for over 20 years Ricardo is specialized in conflict zones and humanitarian crises. He has reported on the Arab Spring and ISIS conflicts. His photographs have been published in Life, Newsweek, Time, The New York Times, The Washington Post, The Wall Street Journal, Le Monde, Liberation, Paris Match, The Guardian, The Times, Die Welt, Der Spiegel, Stern and many more.

Ricardo also collaborated with organizations such as the United Nations, the International Committee of the Red Cross, Médecins Sans Frontières, and Human Rights Watch. As a freelance video journalist, he has worked with CNN, BBC, France24, Aljazeera, Channel 4, VICE, PBS, Euronews, among others.

The Wall Street Journal presented his candidacy for the Pulitzer Prize in 2010 and has been awarded by organizations such as World Press Photo, Pictures of the Year, NPPA, International Photography Awards, PX3, Bayeux Calvados-Normandy Award, Moscow International Foto Awards, Lens Culture, Days Japan International, Mika Yamamoto International Journalist Award, and the International Press Club. As a videographer, he has a Rory Peck award also.

The article has been edited by our associate editor Soumik Basu.

You cannot believe in God until you believe in yourself. – Swami Vivekananda. Michal started his journey towards God, religion…

On Body and Soul

Grandparents always holds a special place in our heart, right where the love resides. For Ritagnik, this project will…