Perhaps the most magical and most recognizable festival in the Land of Smiles is the Thailand Lantern Festival, locally known as the Yee Peng Festival. This celebration is marked by the thousands of floating lanterns released into the night sky.

The year 2019 was quite an eventful one for Ritesh. Earlier during that year, he had the opportunity to travel within the country to document Theyyam, through which he came across the Yi Peng Festival of Thailand. Going through the details of the same on the internet, he was determined to have it ticked off his travel list by the end of the year. So, he started his research on it and completed all the necessary formalities with 5 months to spare. With the Thai government extending their ‘free’ visa deadline from October 2019 until April next year for Indian tourists, he decided to make it a family vacation with his parents. The day finally arrived and they set off for the airport. On the way to Chiang Mai, Ritesh briefs us about the Yee Peng Festival. 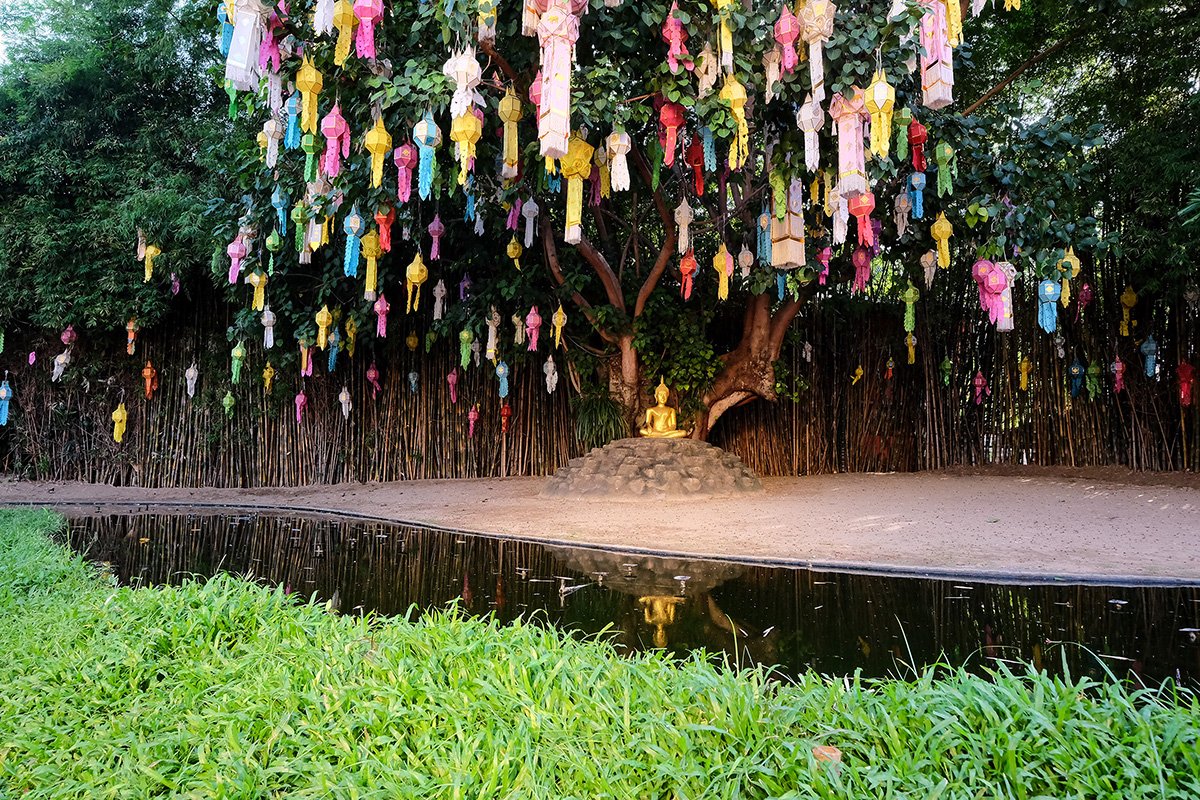 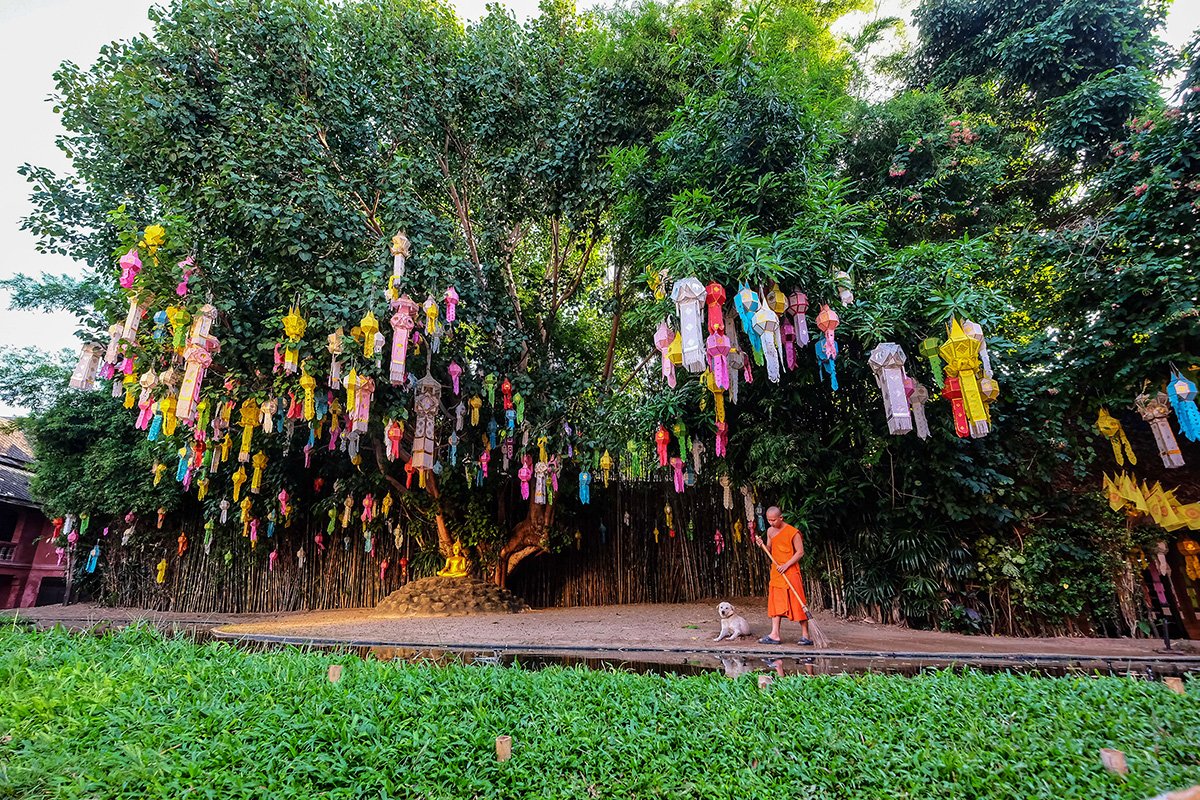 Yee Peng Festival in Chiang Mai (sometimes written as ‘Yi Peng’) is celebrated on the full moon of the twelfth lunar month every year, which basically means mid-way through November, but it can vary. Those incredible photos of hundreds, if not thousands of brightly lit lanterns rising into the night’s sky over Chiang Mai is an iconic image. As history books tell us, this is the time in which locals believe the rivers are filled to their fullest and the moon is at its brightest – the perfect time to ‘make merit’ and set the floating Krathong off on the Ping River, or light the lantern and make a wish for good fortune in the new year. 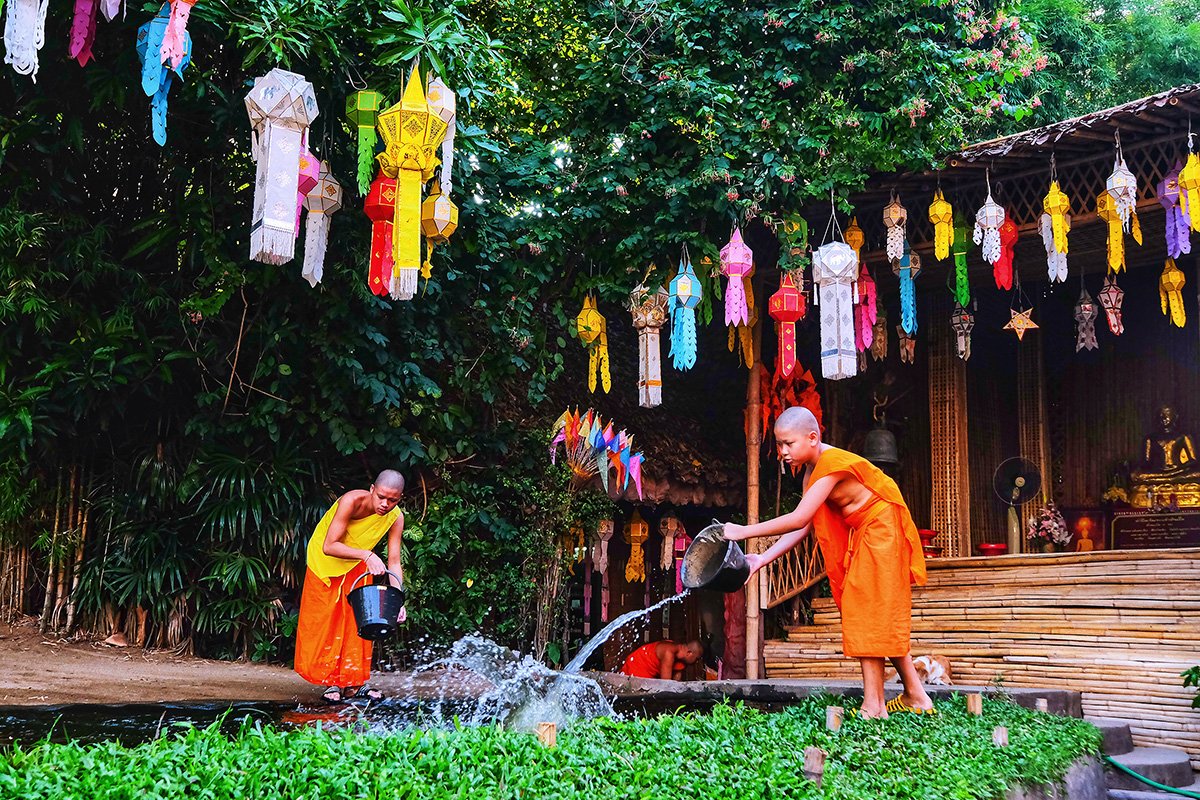 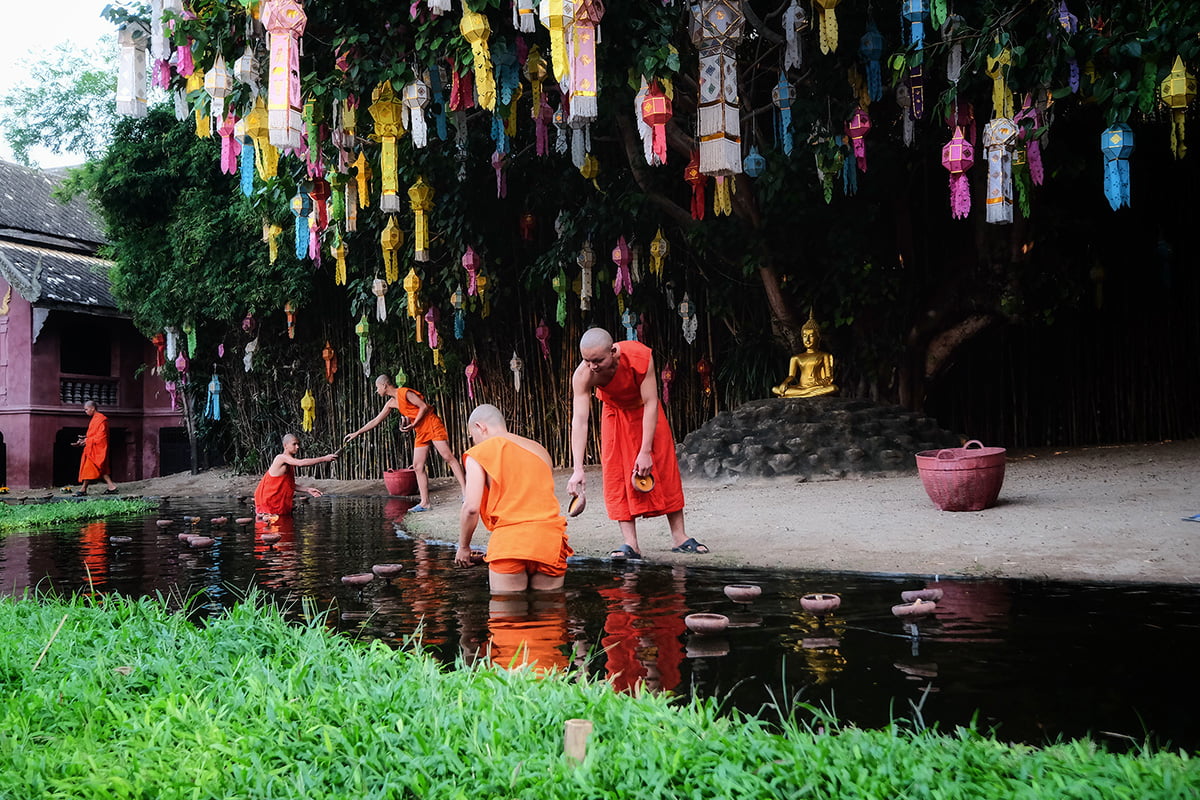 In Chiang Mai, Loy Krathong is preceded by Yee Peng (The Lantern Festival), during which people release floating lanterns into the sky. It is during Yee Peng that the locals’ homes and public places are seen decked out in colourful hanging lanterns and flag decorations. The act of releasing the lantern and Krathong symbolizes letting go of all ills and misfortunes in the previous year. 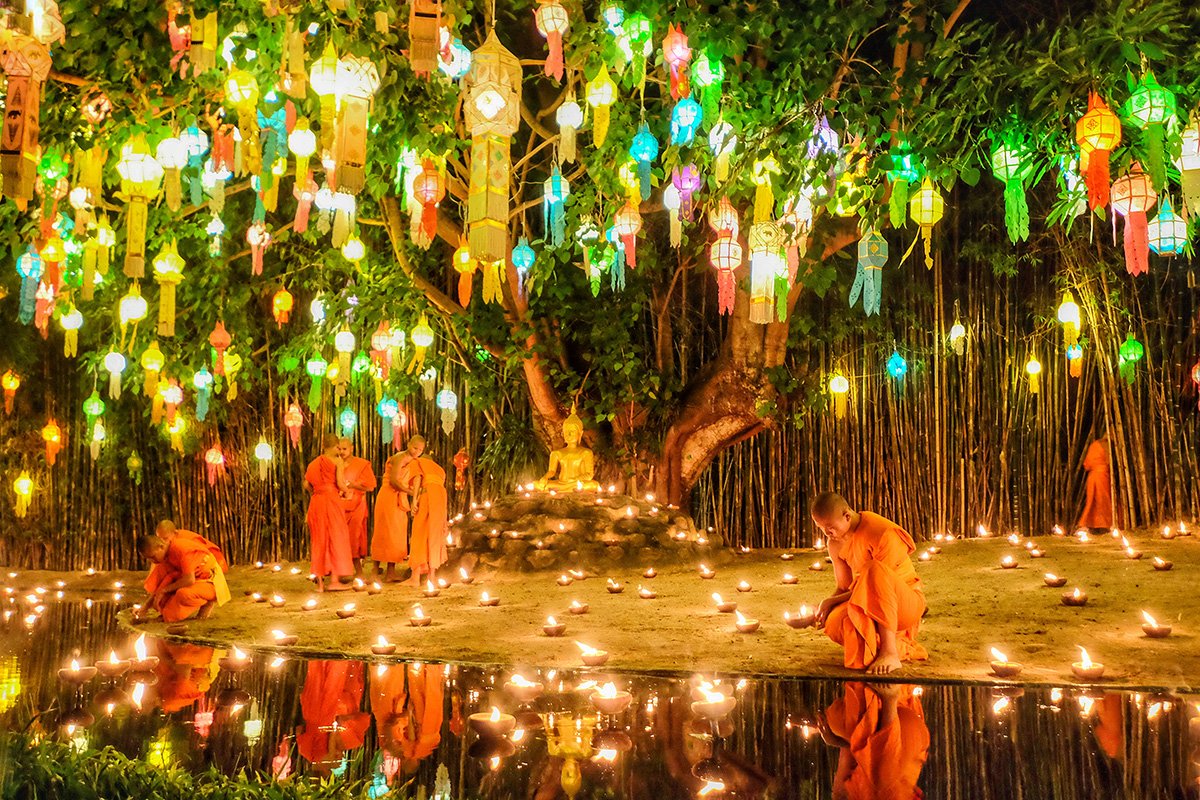 Buddhists also believe that if one makes a wish when he sets off the lantern, it will come true (but only if he does good deeds the following year). As a part of this festival of lights, there were plenty of other activities that happen all over Chiang Mai. Those include traditional Thai dance shows, the official ‘Yee Peng Parade’ around the Old City gate and down Tha Phae Road, live music, and handicraft sessions. One can also expect lots of food vendors setting up firecrackers, fireworks, and hordes of tourists with selfie sticks (particularly around the Tha Phae Gate area). 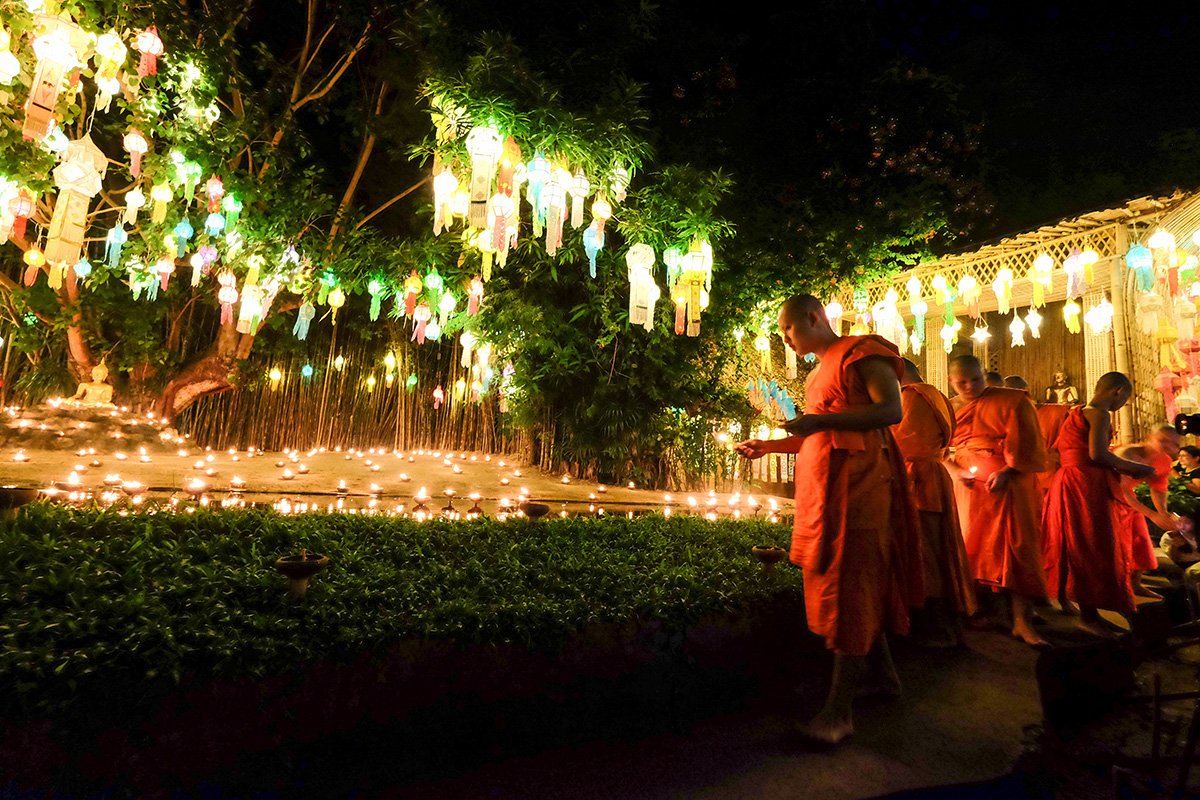 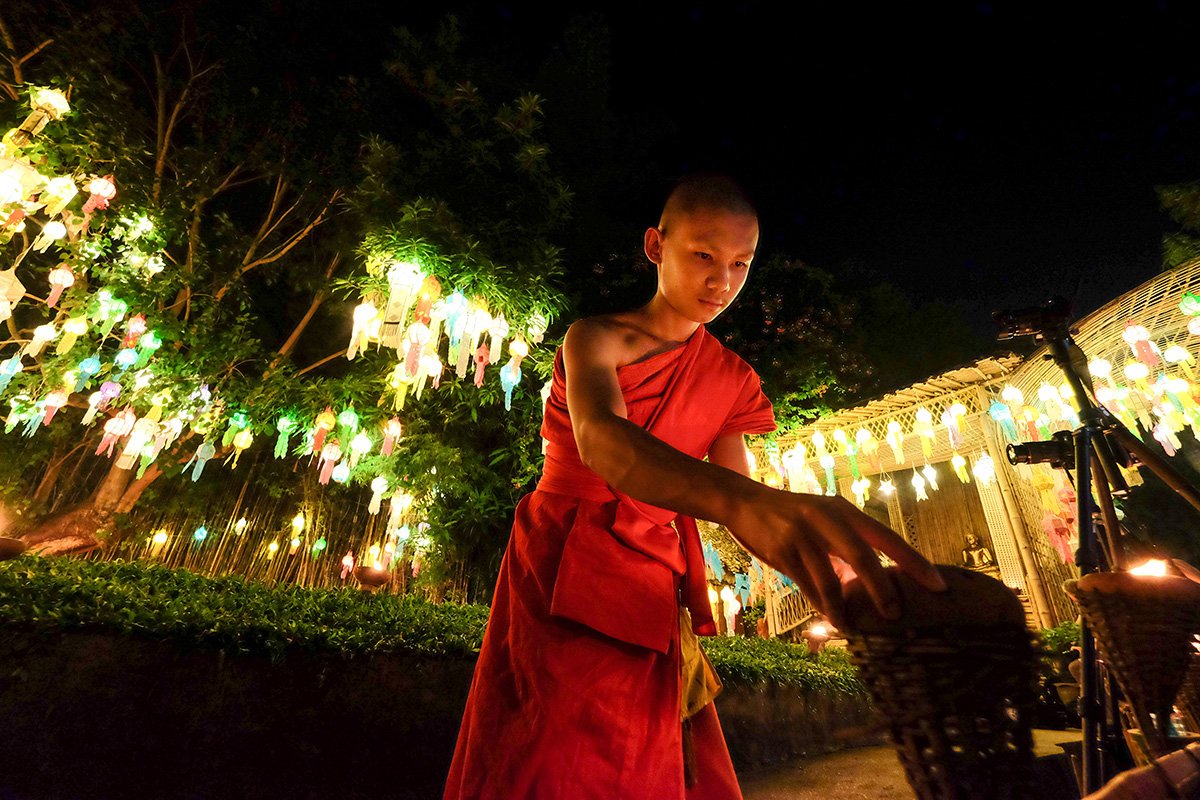 Nevertheless, after reaching to Chiang Mai, Ritesh’s first destination was Wat Phan Tao (Wat means Temple) which is reputed for its beautiful ambience. However, many tourists and YouTubers who had come there the previous year claim that the place would be shut down for renovation for the next couple of years. With his fingers crossed, he arrived at the place and was overjoyed to learn that they would be performing the ritual that very evening. Inside there was a huge banyan tree with a Buddha statue beneath. Several colourful lanterns were hanging from the branches. 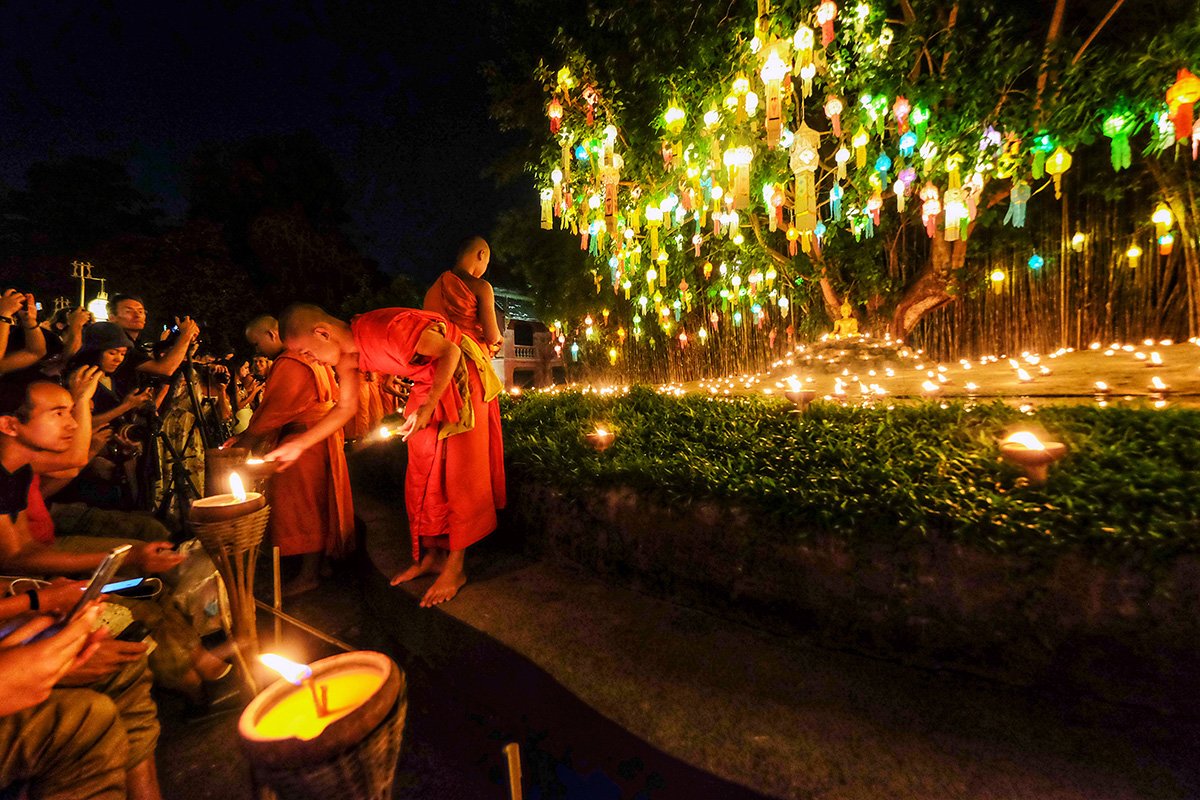 In front was a narrow water body meandering across one end to the other. He could already imagine his compositions with the XT1 and the 10-24. There were a few empty benches arranged in front with a few photographers stationed. He quickly selected his spot and sat down. With every passing minute, the vacant seats started filling up with almost little or no space left for the last-minute entrants. The blue hour fell upon soon and the lanterns were lit up. The entire ambience looked surreal. At seven, the little monks dressed in their vermilion attires started coming out and lighting the lamps placed all around the Buddha statue. Soon the entire place was lit beautifully. The 10mm focal length enabled him to capture the environment in its fullest. The monks then sat in front amidst the burning lamps and offered prayers to Buddha. 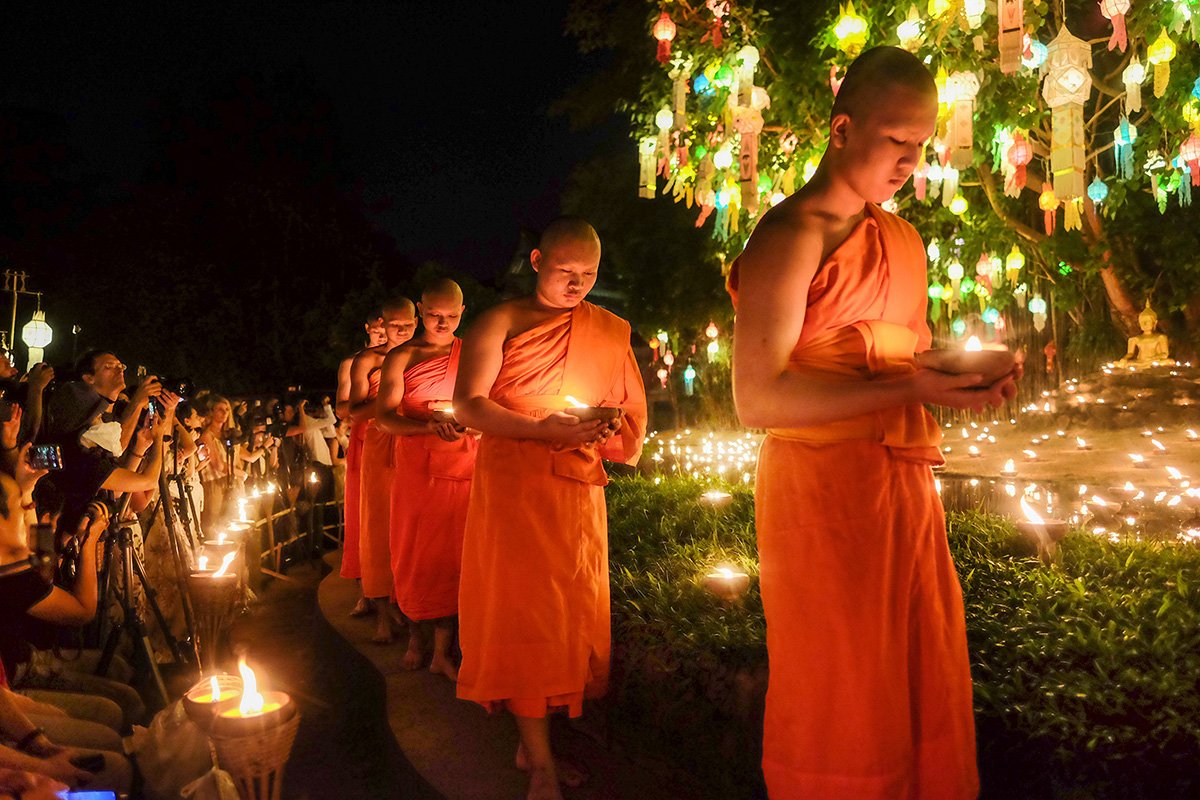 With that day coming to an end he was immensely satisfied having witnessed the event live. But for him, the best was reserved for the second day. On the next day, he would be witnessing the iconic release of the sky lanterns by the hundreds, a sight one would remember throughout his life. 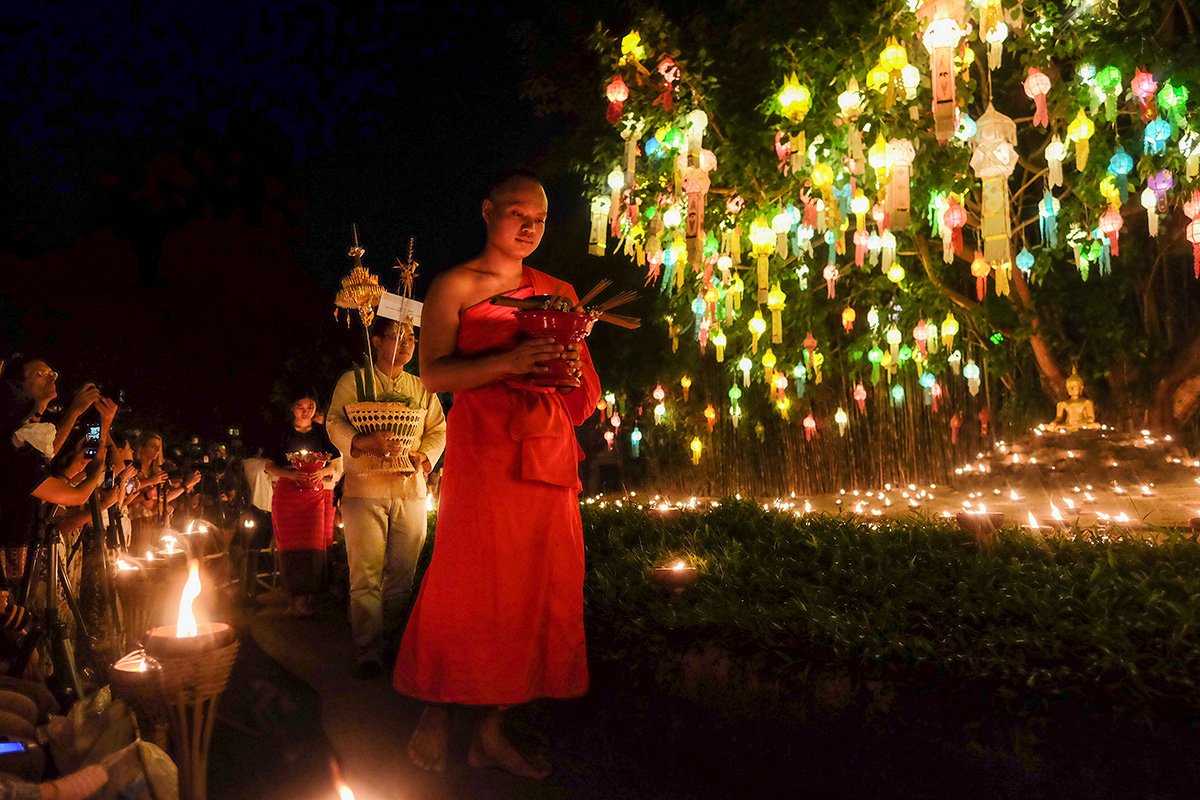 Mass lantern release happens in two places- the Maejo University and the Cowboy Army riding club. Both places are located on the outskirts of the main city of Chiang Mai. He had pre-booked a VIP ticket to the event as they sell out very fast due to heavy demand. His venue was at the Army riding club which was around 10kms from the city. He was picked up in a van and transported to the venue by 4 pm. Upon arrival, he entered the ground which had several vendor stalls offering snacks and drinks on the house. Walking down a bit further, he came across a tree-shaped structure which had golden leaves hanging with wishes written on them. 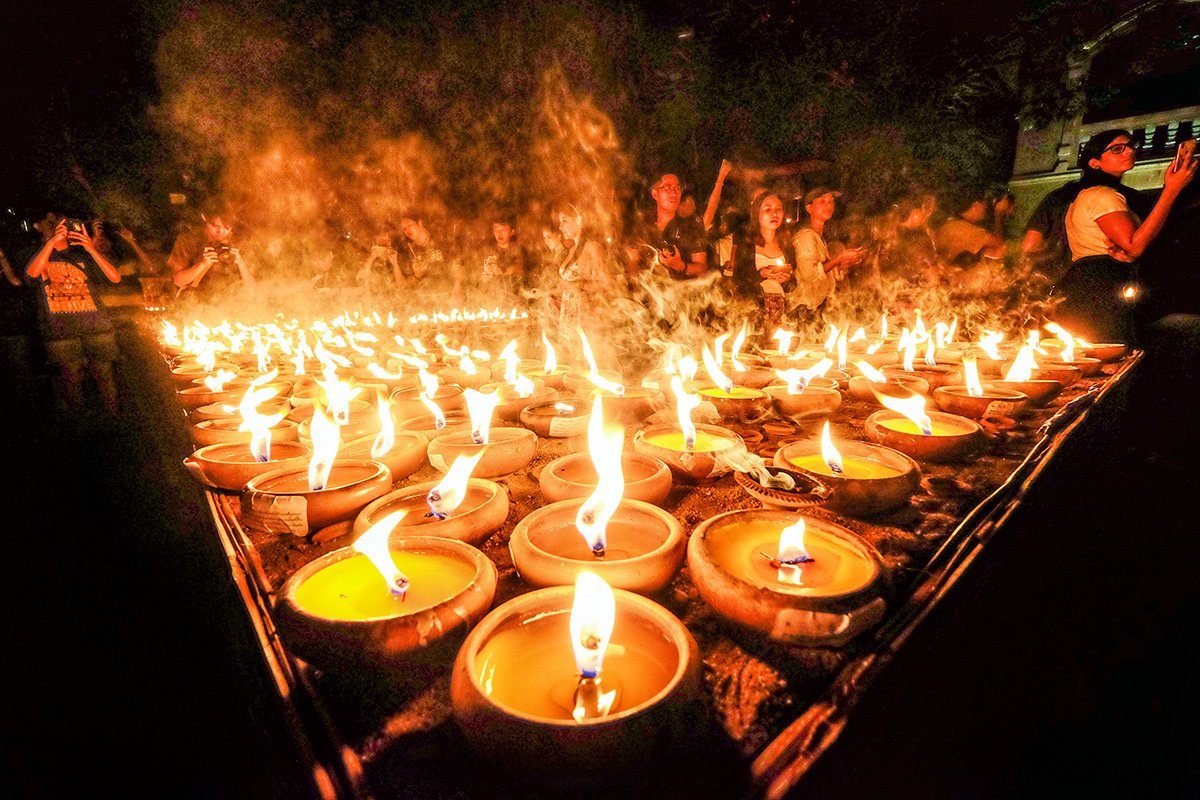 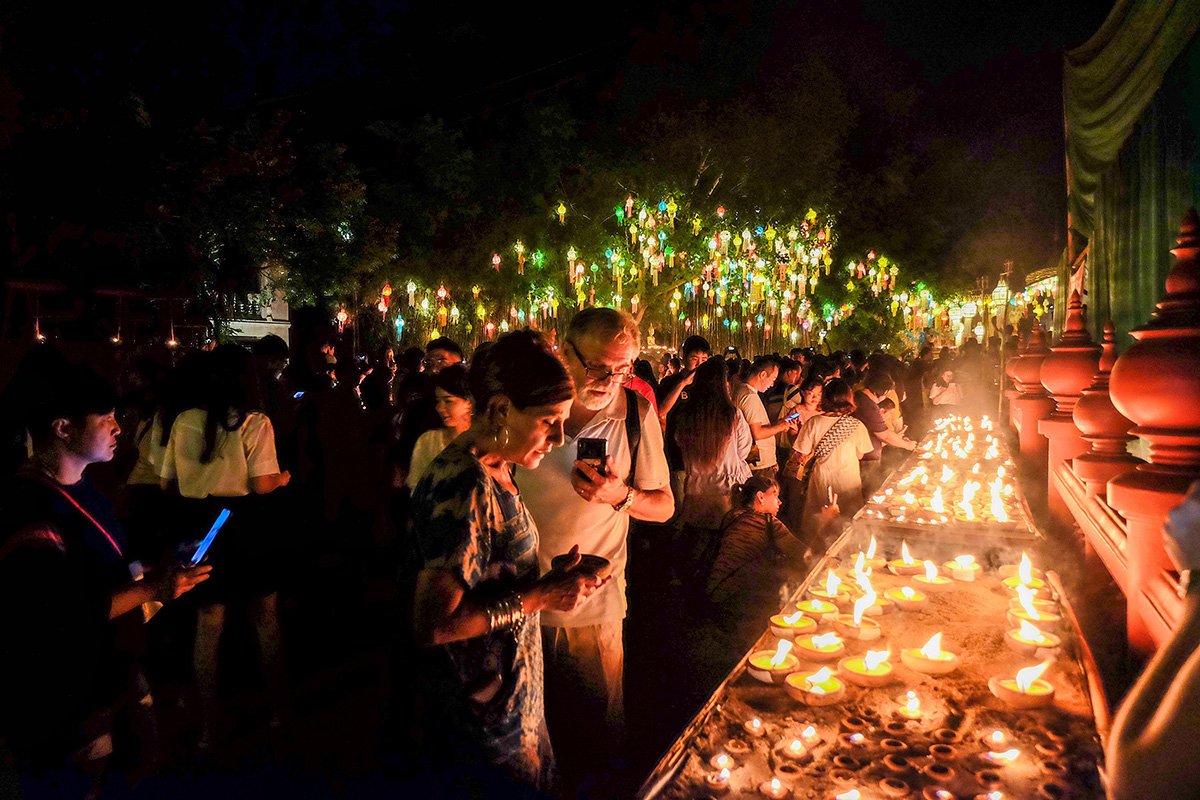 The wish tree conveyed all wishes directly to Buddha. There were traditional Thai dance performances and sword making stalls as well. The next section was the main arena where all invitees would be seated to witness the mass release of the lanterns. At about 8:30 pm the guests started lighting their lanterns and within a few minutes, the place was well lit. 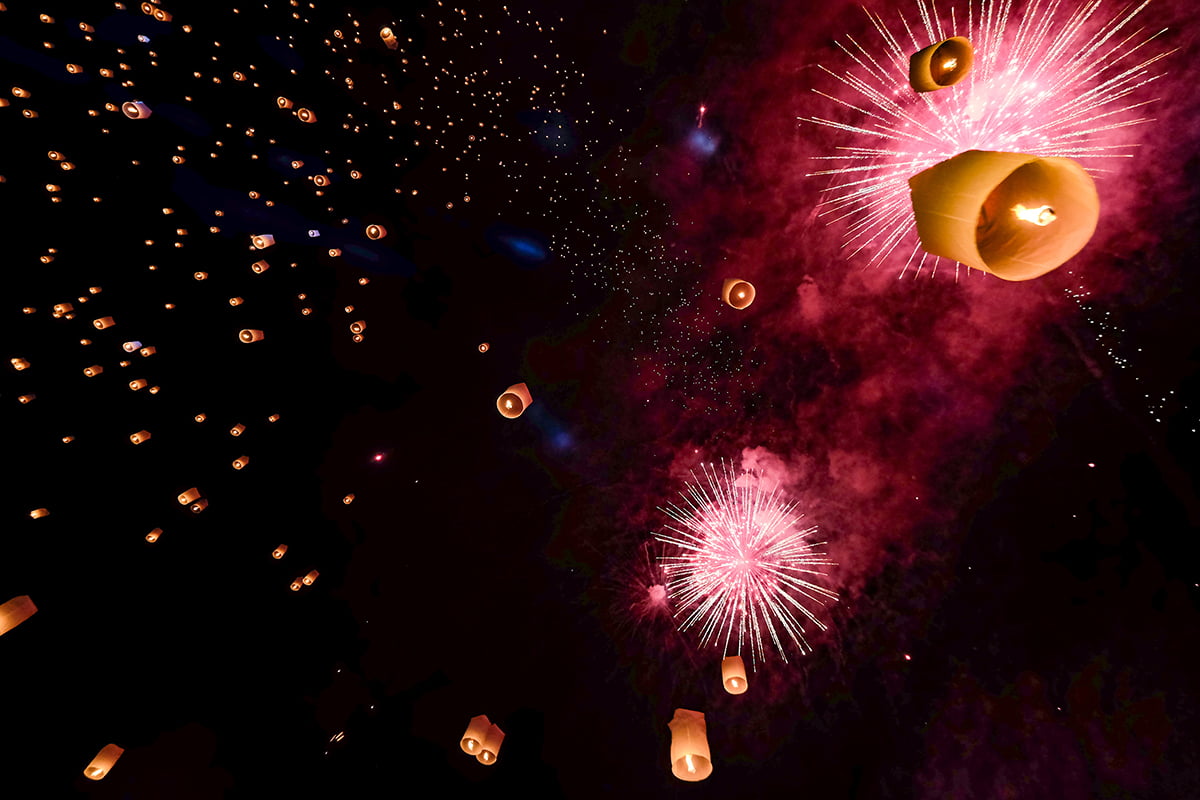 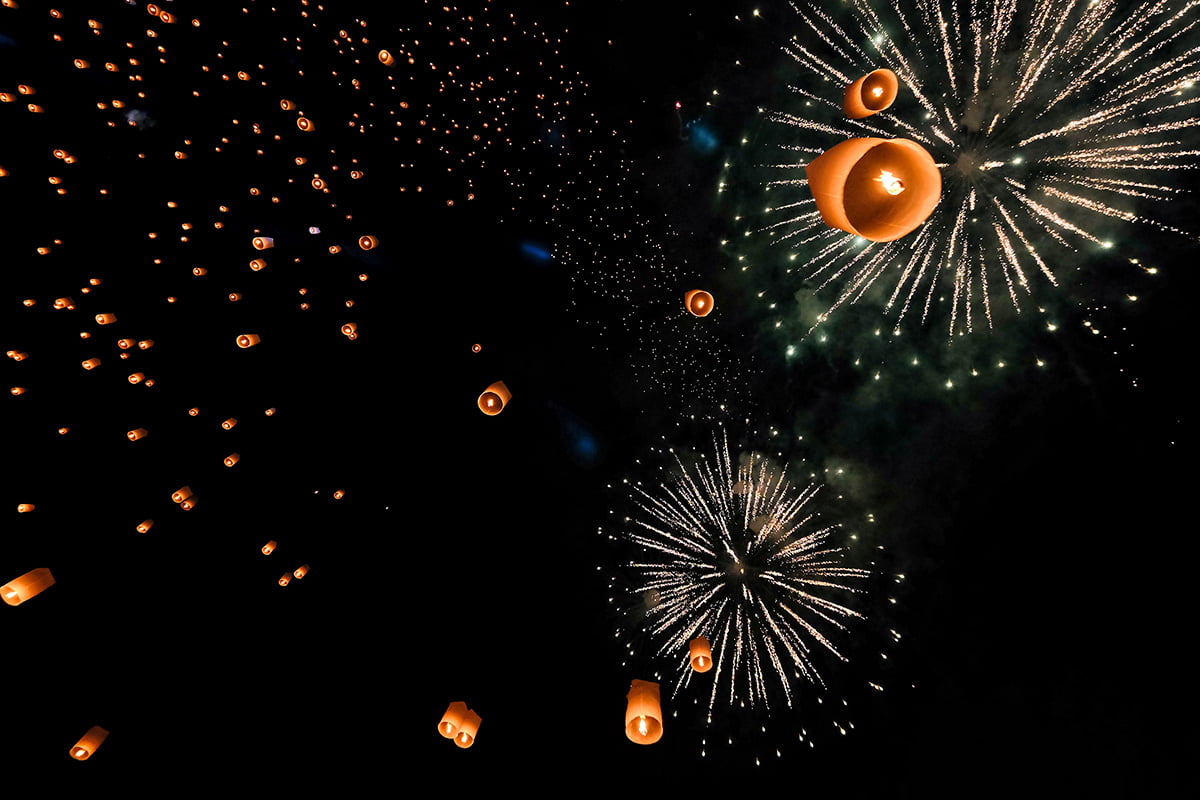 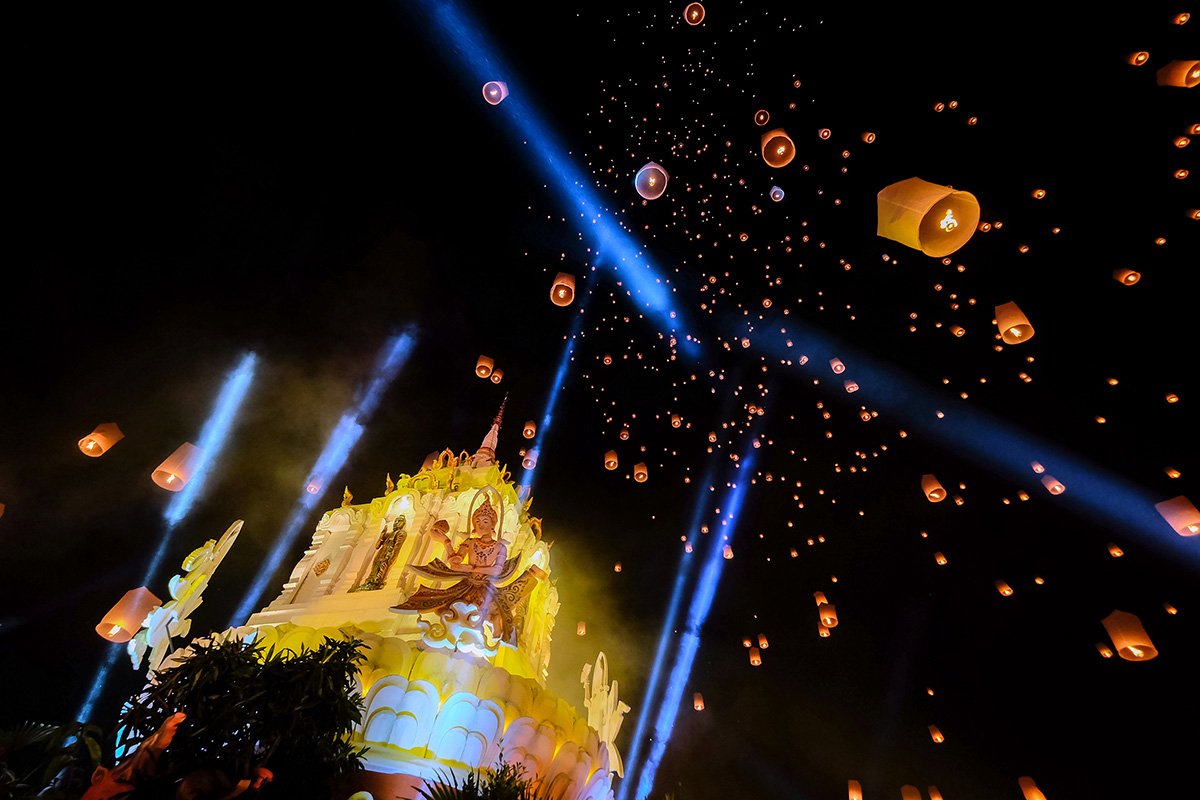 While all this was going on, Ritesh was ready with his XT1 and the ultrawide 10-24 to capture these moments. Countdown to ten and the sky filled up with the rising lanterns with fireworks lighting up the night sky. They say that “All’s well that ends well” and what better ending could he have wished for himself in 2019. 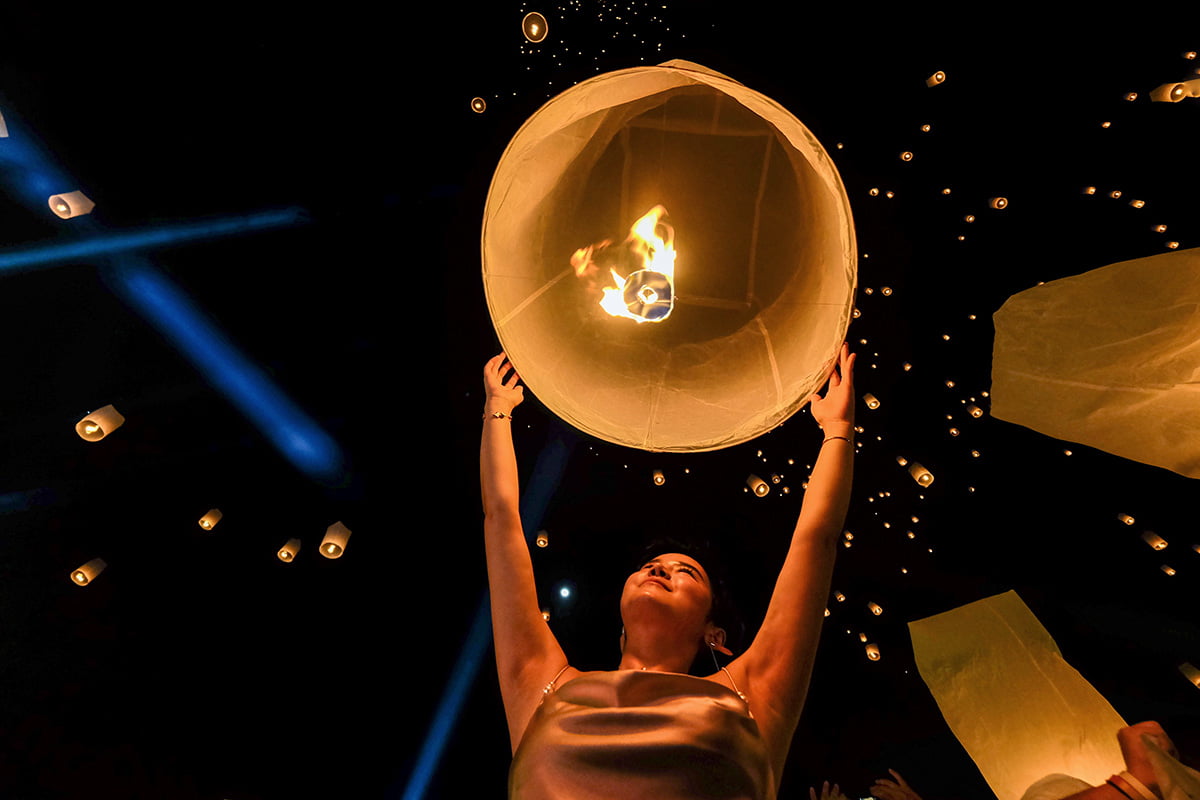 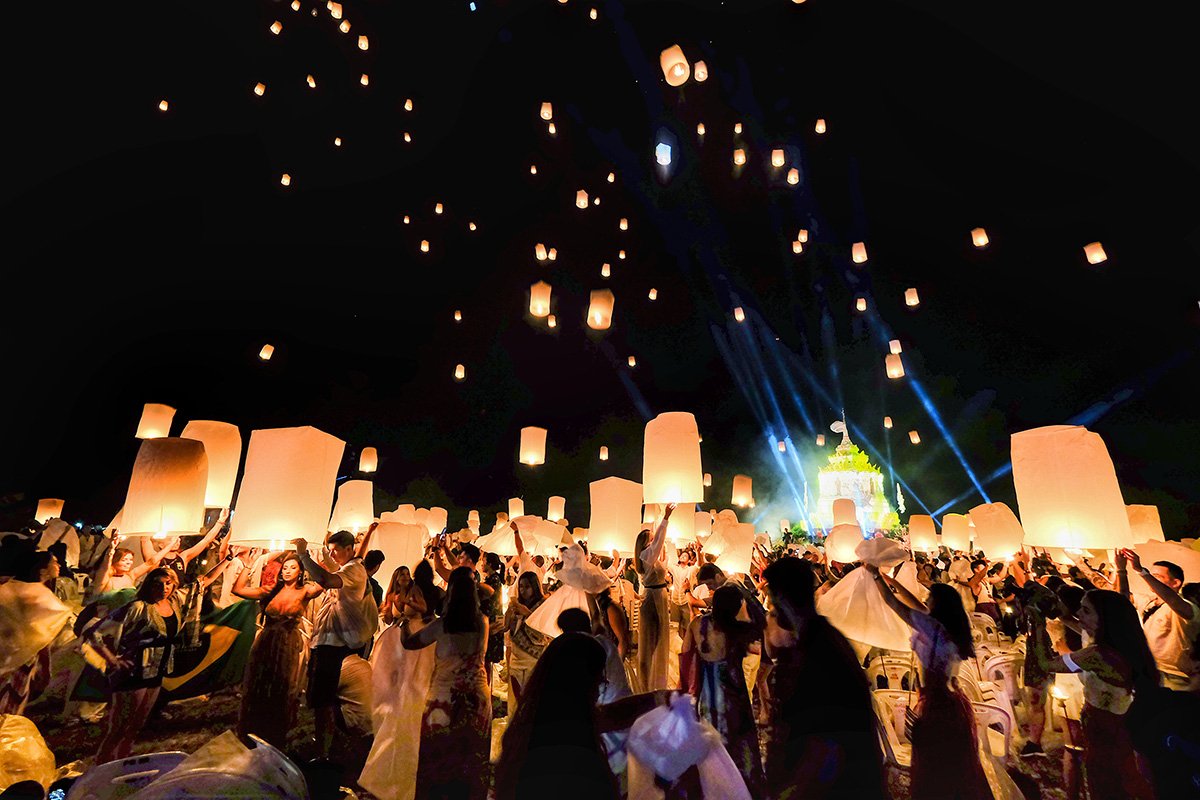 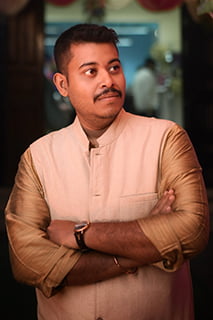 An MBA by education and a former banker, Ritesh is a Kolkata born visual storyteller. He started his photography journey with a point and shoot camera. The turning point in his life came when he came to Kolkata during his annual vacation after having worked abroad for a year. He was out there shooting on the streets of Kolkata. On that fateful day in 2015, where he met with an accident which resulted in the dislocation of his left knee. The injury was severe and required him to be under rest for at least 3 months but leave extension was not granted to him hence, he had to quit. Depressed and injured, he kept on shooting as it gave him the strength to fight and recuperate. The love and passion for the art had grown in him so much that he decided to pursue it for the rest of his life. He believes that his journey in the second innings of life has just begun and he has a long way to go in the hope of discovering the photographer present in him.