The Forgotten Trains of India

Over the years, despite the major changes in the geography, history or in the post partitioned society, some trains have remained to be a part of the nation and continued to render their duties.

Ritayan Mukherjee lives in the suburbs of Calcutta and trains are the biggest part of his life. He takes a commuter train everyday to reach Howrah station, which is a very busy terminal. Commuters like him jostle with travellers from all parts of the country and make their way across the iconic Howrah Bridge, to get into the city. Each day, as he winds his way through the crowd, he can hear announcements for different trains, on the PA system – the fast passenger trains to nearby destinations; the slow passenger trains that go to the same destinations but take never seem to get there; the Superfast Expresses that traverse the length and breadth of India; the Express trains that twiddle their thumbs and make way for the Superfast, the swanky Shatabdis and Rajdhanis that can speed up to 150 km/hr. There is a whole class system – or hierarchy if we will – to these trains. 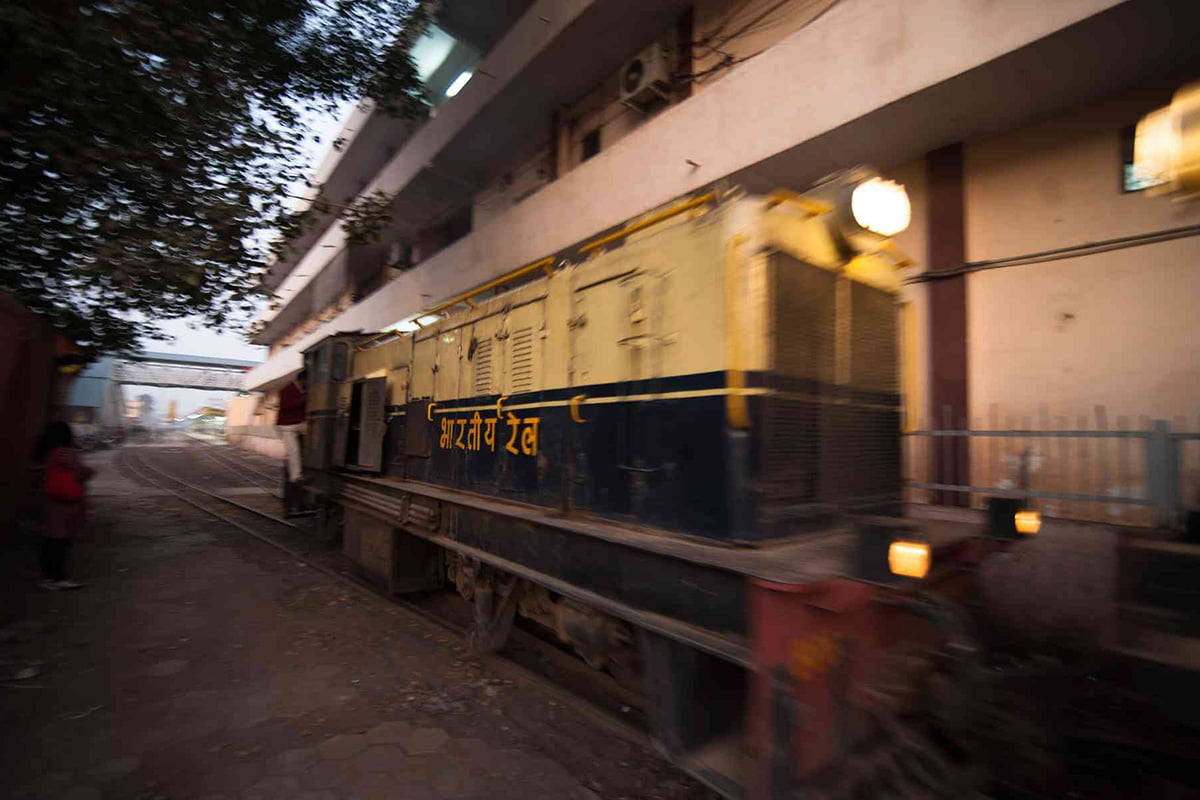 The Gwalior to Sheopur Kalan Passenger train runs on diesel engines. After every return journey, the engine goes to Gwalior Railyard for maintenance. 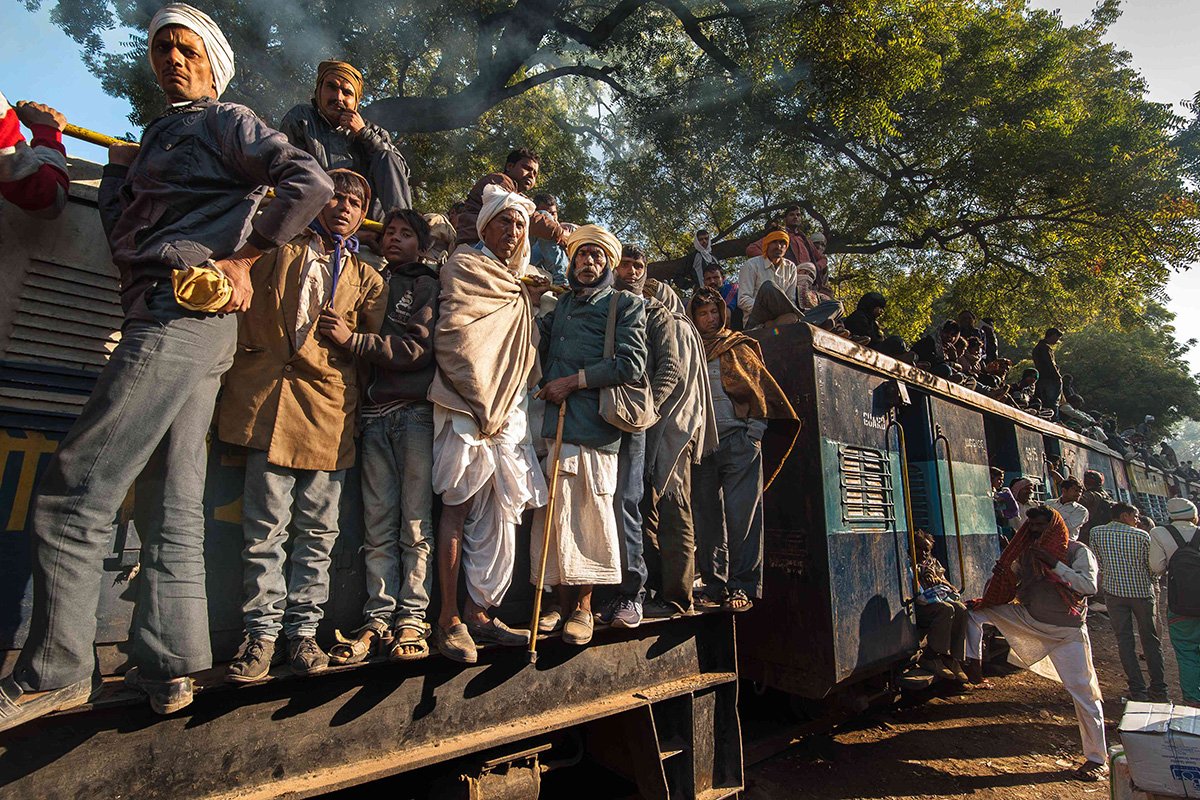 Passengers mount the roof, hang by the sides and crowd inside the compartments. The train with a capacity of 150 – 200, regularly carries twice or thrice the capacity.

And then some trains don’t even make it to the bottom rung. These are one-off passenger trains that operate on little branches to the main network. Maybe the terrain is difficult, or the route is not very busy, or the system has kind of forgotten about them. The tracks on these routes haven’t been updated to ‘board gauge’ like the rest of the network. They still run on rails that are a meter apart (meter gauge) or just two feet apart (narrow gauge). Some time ago he had the opportunity to travel on a narrow-gauge route from Katwa to Balgona on his home state of West Bengal. He was awed by how different the experience was from his regular commute. 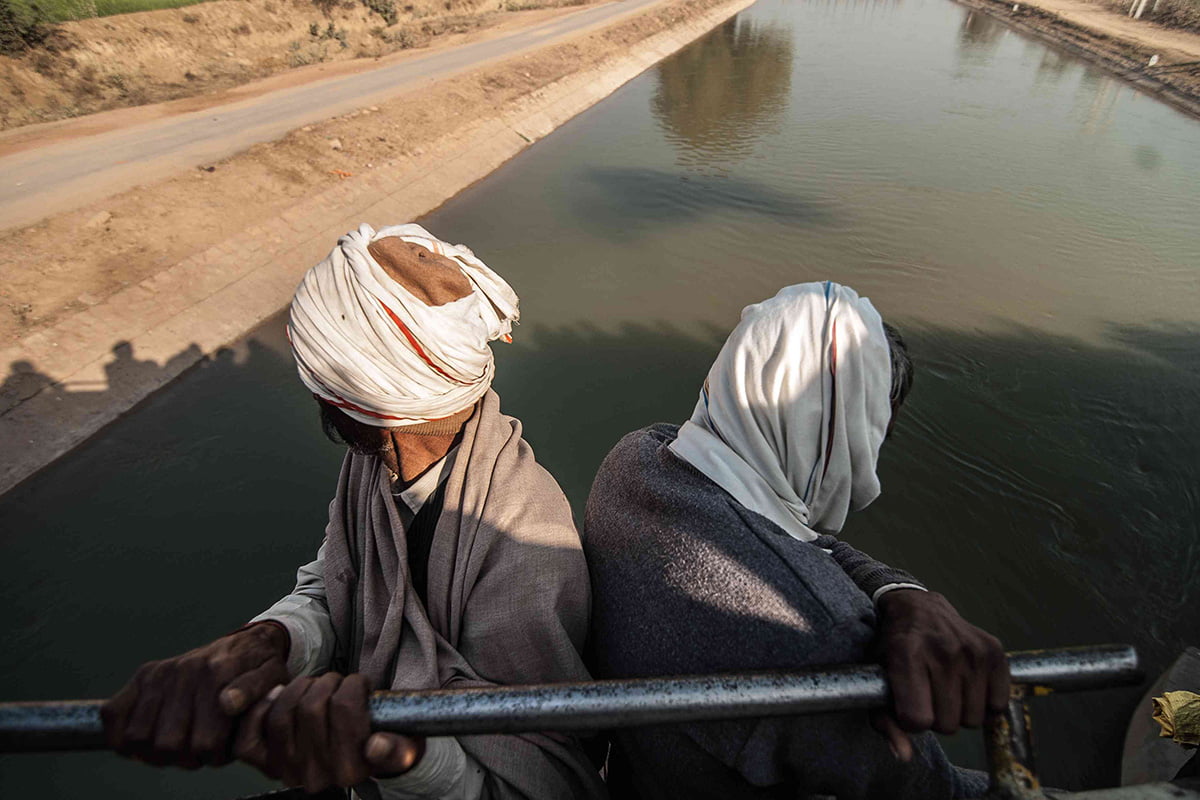 Two passengers on the side look on as the train crosses an irrigation canal.

The commuter trains can get crowded, but the duration is short and the stops are 30 seconds each. The urgent hum of the electric engine fuses with thoughts of the day ahead. He does look out of the window but he doesn’t see anything really. In contrast to this energetic, almost restless travel, trains on a narrow-gauge line can only go up to 35 km/hr. This speed was revolutionary for the early twentieth century. A century later, almost everything on the road can outrun it. 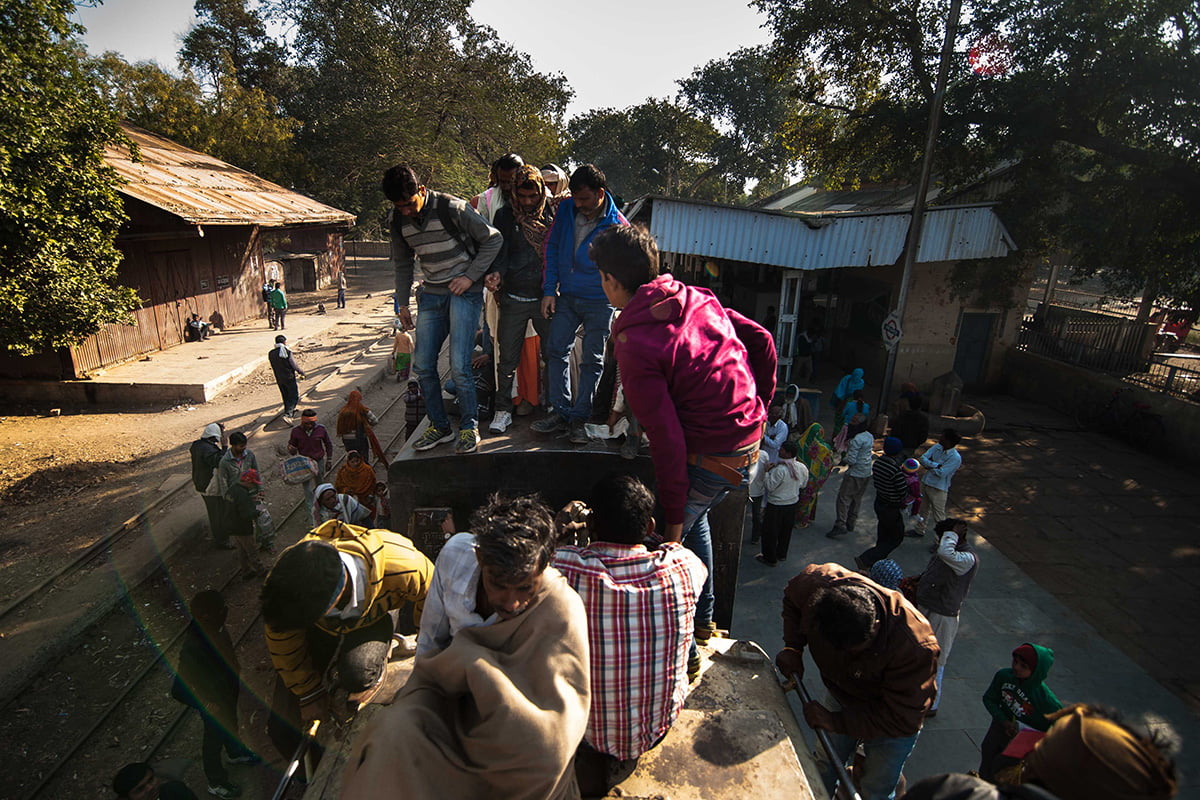 Passengers dismounting from the roof of a station. Generally, the train halts 3 – 5 minutes at a station.

The Katwa experience stayed with him always and he started doffing around. He then found out about the Gwalior Sheopur Kalan Passenger train. It runs on the longest remaining narrow-gauge route in the world. The train takes more than 10 hours to cover 198 km. It is so behind of its time that the Indian government tried to get it on the UNESCO World Heritage List. Sadly, it didn’t make the cut. Another thing that caught his imagination was, that the train travels through the ‘Chambal’ region of Central India. It was infamous for being a lawless, harsh, landscape dotted with bandits – kind of like the Wild West of India. It would bring back memories of Bollywood-Spaghetti Western movies from the 80s and the 90s. He knew he had to go there once. 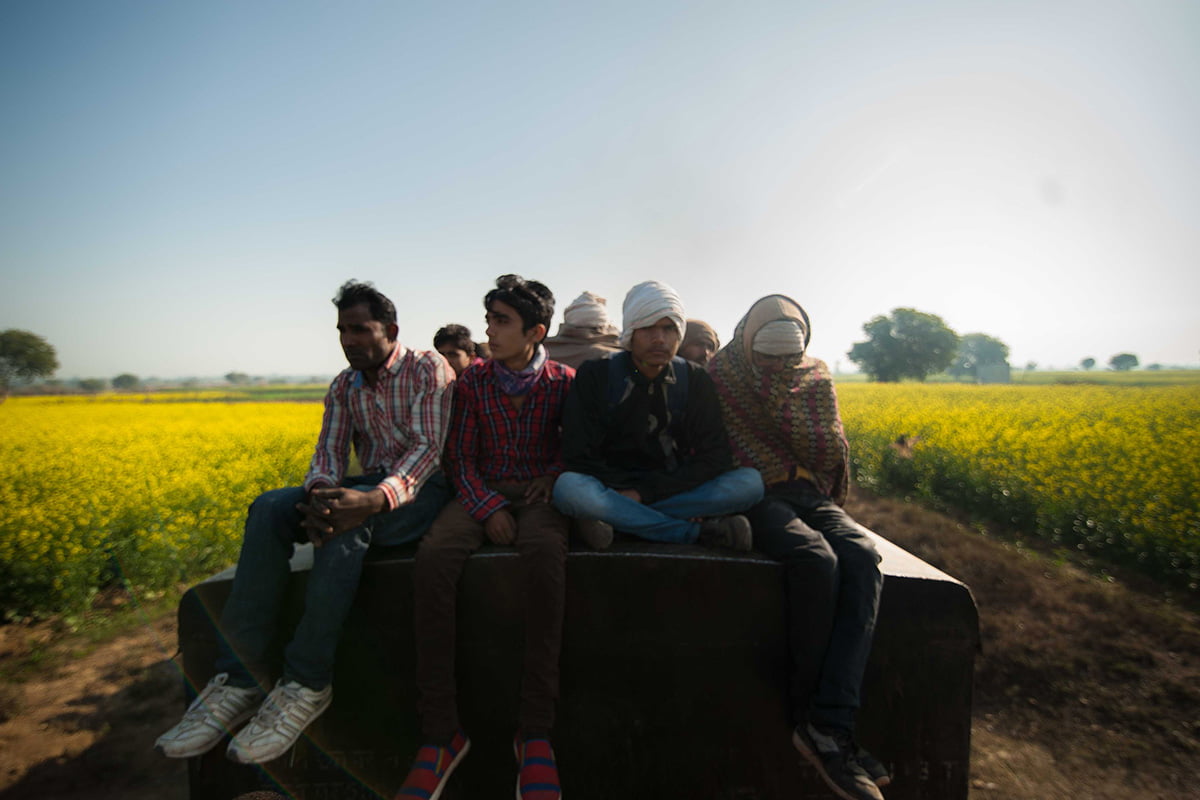 The Katwa experience stayed with him always and he started doffing around. He then found out about the Gwalior Sheopur Kalan Passenger train. It runs on the longest remaining narrow-gauge route in the world. The train takes more than 10 hours to cover 198 km. It is so behind of its time that the Indian government tried to get it on the UNESCO World Heritage List. Sadly, it didn’t make the cut. Another thing that caught his imagination was, that the train travels through the ‘Chambal’ region of Central India. It was infamous for being a lawless, harsh, landscape dotted with bandits – kind of like the Wild West of India. It would bring back memories of Bollywood-Spaghetti Western movies from the 80s and the 90s. He knew he had to go there once. 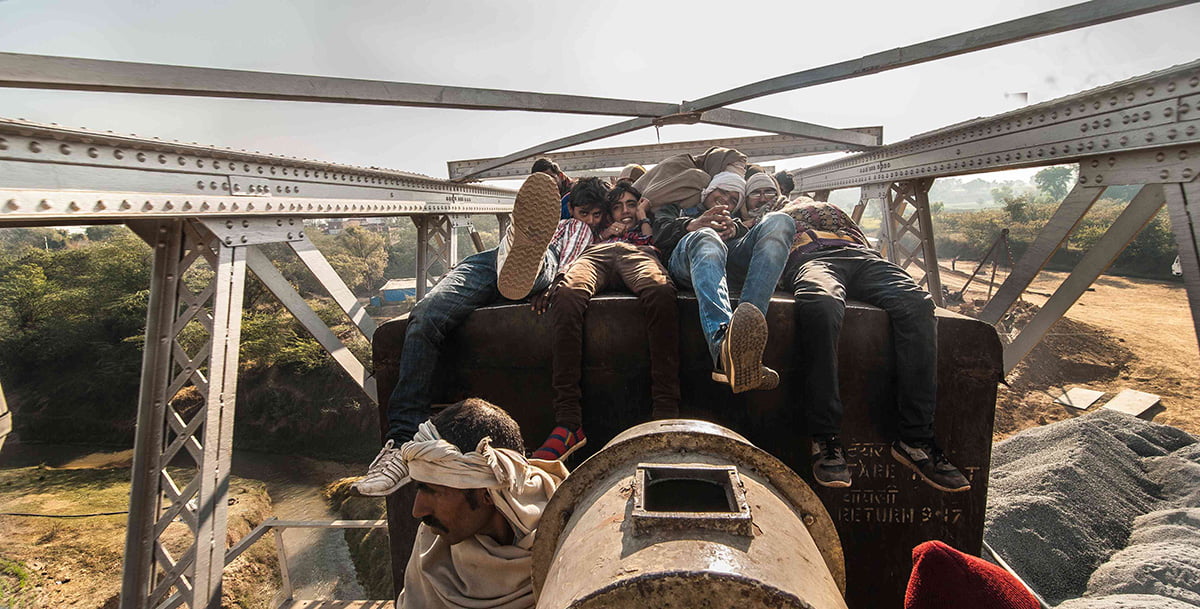 Crossing the Kuno River on a low truss bridge. Regulars on the route lay flat on their backs to avoid hitting their head on the crossbeams. 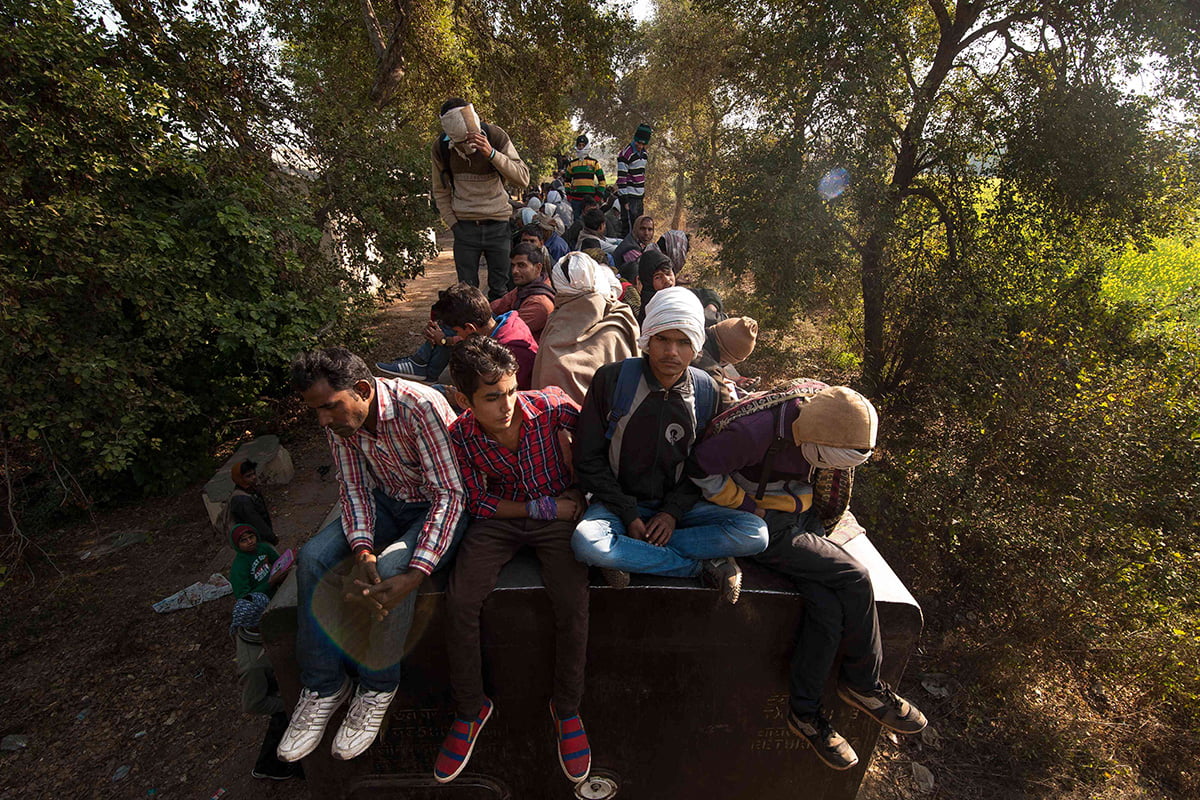 The train also makes unscheduled stops in the middle of nowhere. Someone misused the emergency breaks to get off at a convenient spot. Something of the ‘lawless’ lingers in these unscheduled stops and passengers travelling without tickets.

On a long weekend in January, Ritayan flew to Delhi and then drove to Gwalior. Next day he was at the Gwalior station at 5:30 am; the train left at 6:25. He was advised to get there early if he wanted a seat but he wasn’t early enough. The seven coaches, that have a capacity of 150 – 200 passengers, were already full. His co-passengers helped him on-board and made some room for him. The train didn’t have much by the way of amenities – hard wooden seats and no fans, lights, or toilets. 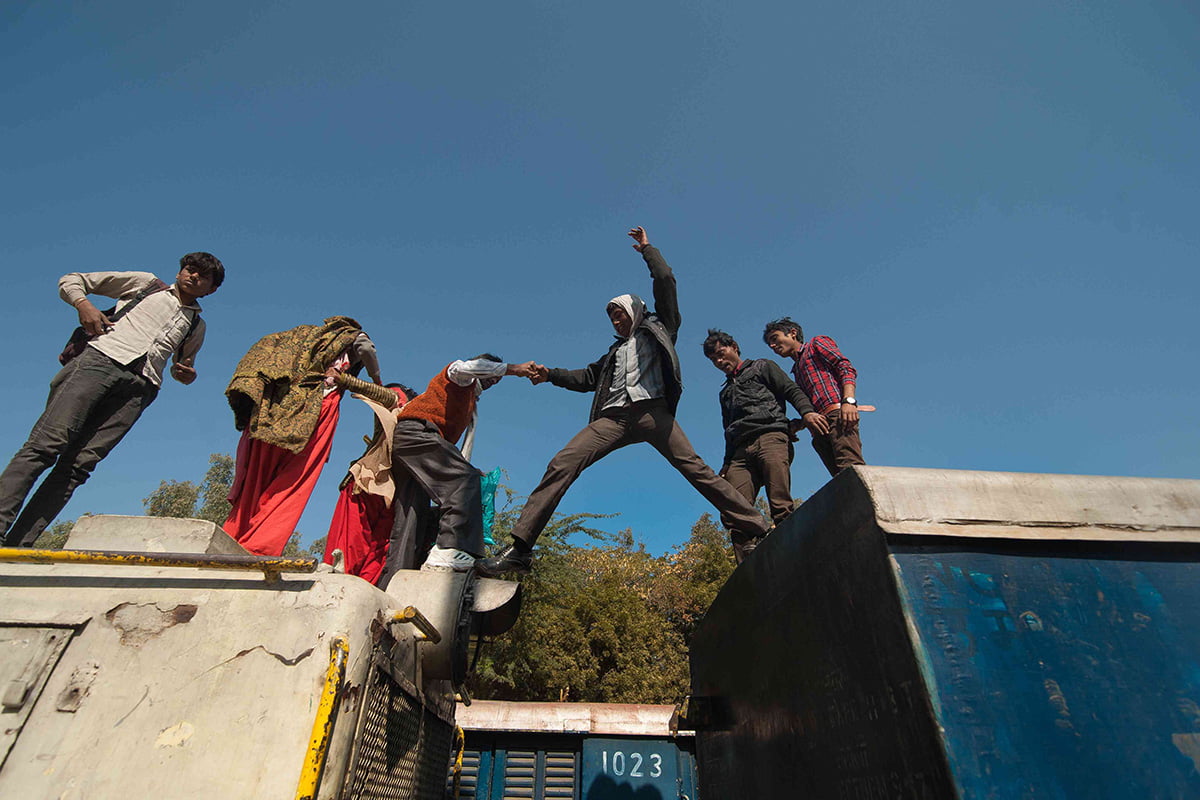 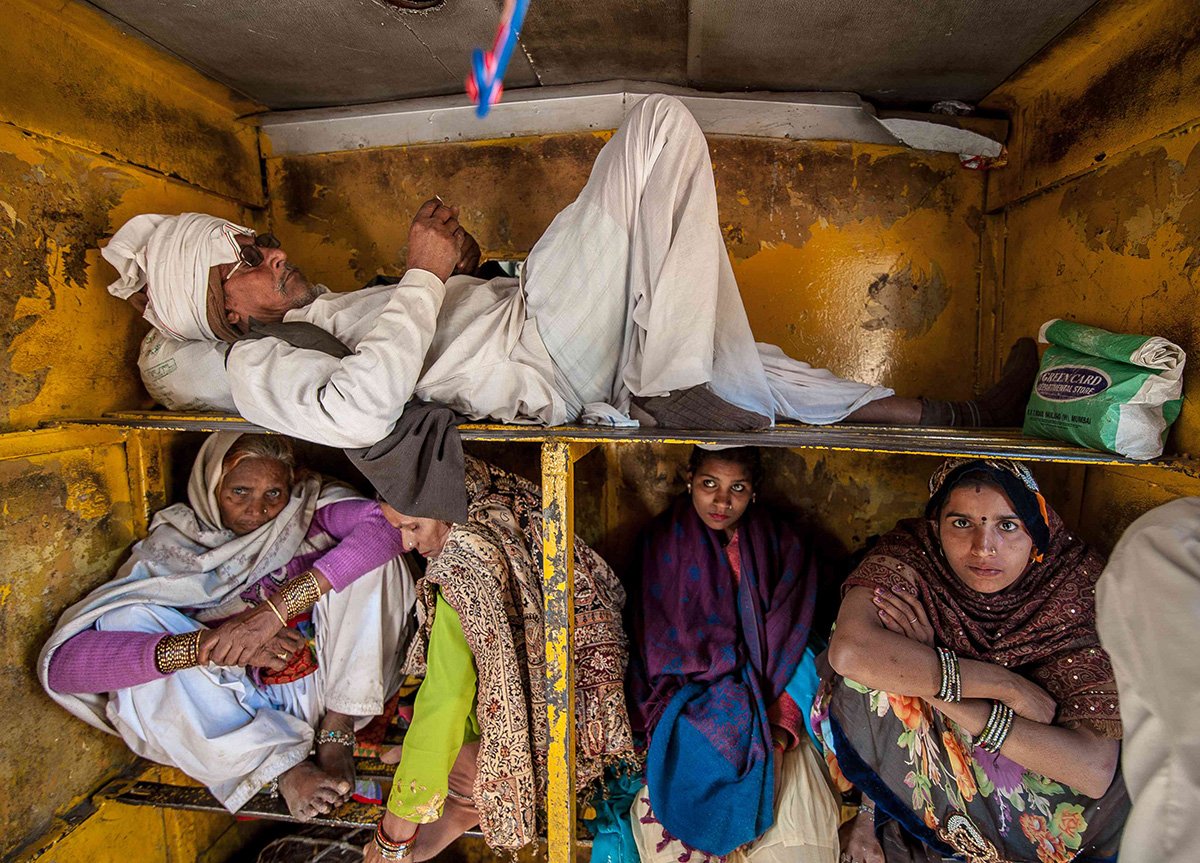 This gentleman was travelling with his entire family and insisted on occupying the top bunk all by himself. A part of me wanted to exhort these women “Women of the world, Unite! You have nothing to lose but your patriarchal chains!”

From Gwalior, the next stop was Ghosipura where another trainload of people were waiting for the train. He wondered how all these people would get on. They made their way up to the carriage roof; hung on to the sides of the train; and of course, wedged themselves inside the coaches to the point where it was quite difficult to breathe. Ritayan made his way up to the driver’s cabin and Anwar Khan, the driver, let me ride with him for a bit. He shared his snack of puffed rice with Ritayan as he told him about his daily drill. He drove the train for 6 hours and then rotated out for a mandatory 16-hour break while another driver took over. Later Anwar helped him climbing up to the carriageway roof. 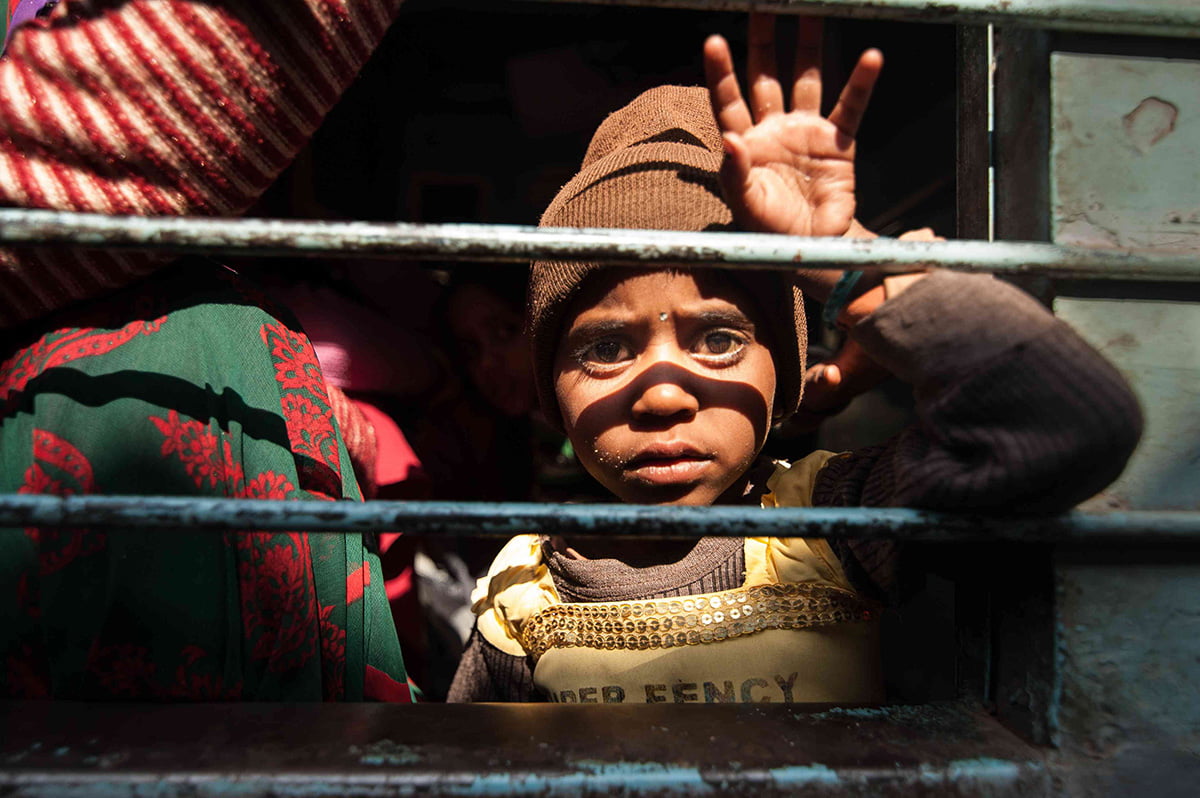 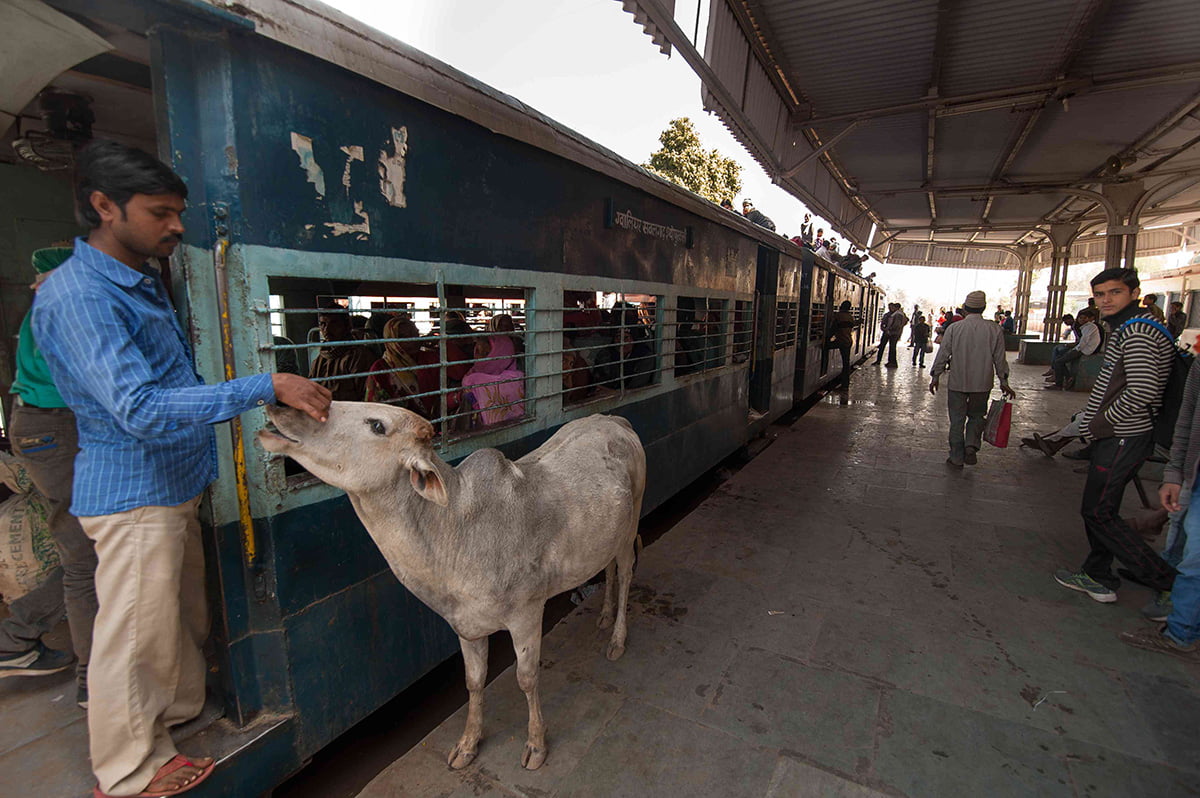 He was very excited about riding on the roof, but it wasn’t all that Ritayan was expecting. It was as crowded as the coach below, but again, he was accommodated. His co-passengers also told him to watch out for branches to avoid getting gashed. Then, at Birpur station several passengers dismounted and made their way to the coaches. The train crossed the Kuno River on a truss bridge and the crossbeams had low clearance. The brave ones on the roof laid flat on their backs to avoid being hit. 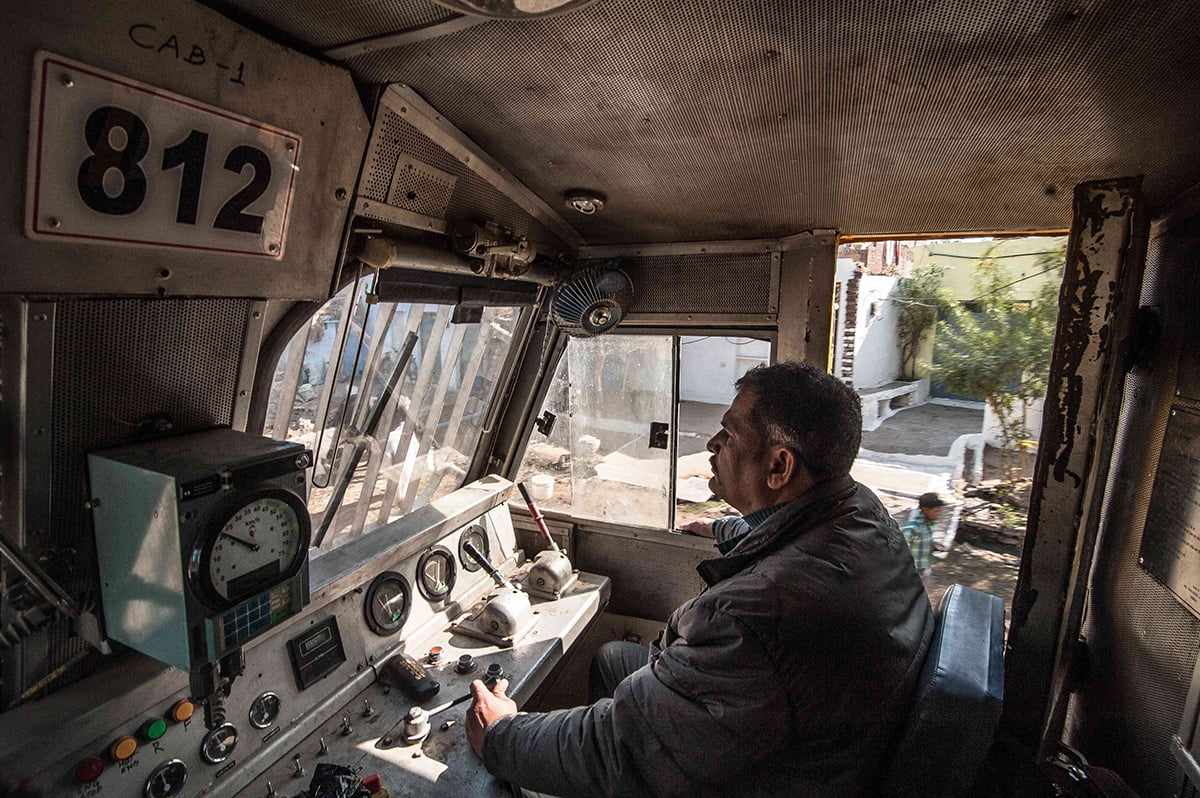 Mr. Anwar Khan drives the train for six hours from Gwalior and rotates out while another driver takes over.

The day was measured by the rhythmic beat of the train as it trudged on. The people he met had a kind of resigned forbearance about them – the pace was slow but there was no point fretting about it. They tried to make one another as comfortable as possible and got out at stations frequently to stretch themselves. Ritayan asked them why they took the train and they told him their villages weren’t well connected by roads. Where the road existed, taking the bus was expensive. They also told him about plans to upgrade the route to broad gauge, which would cut travel time. 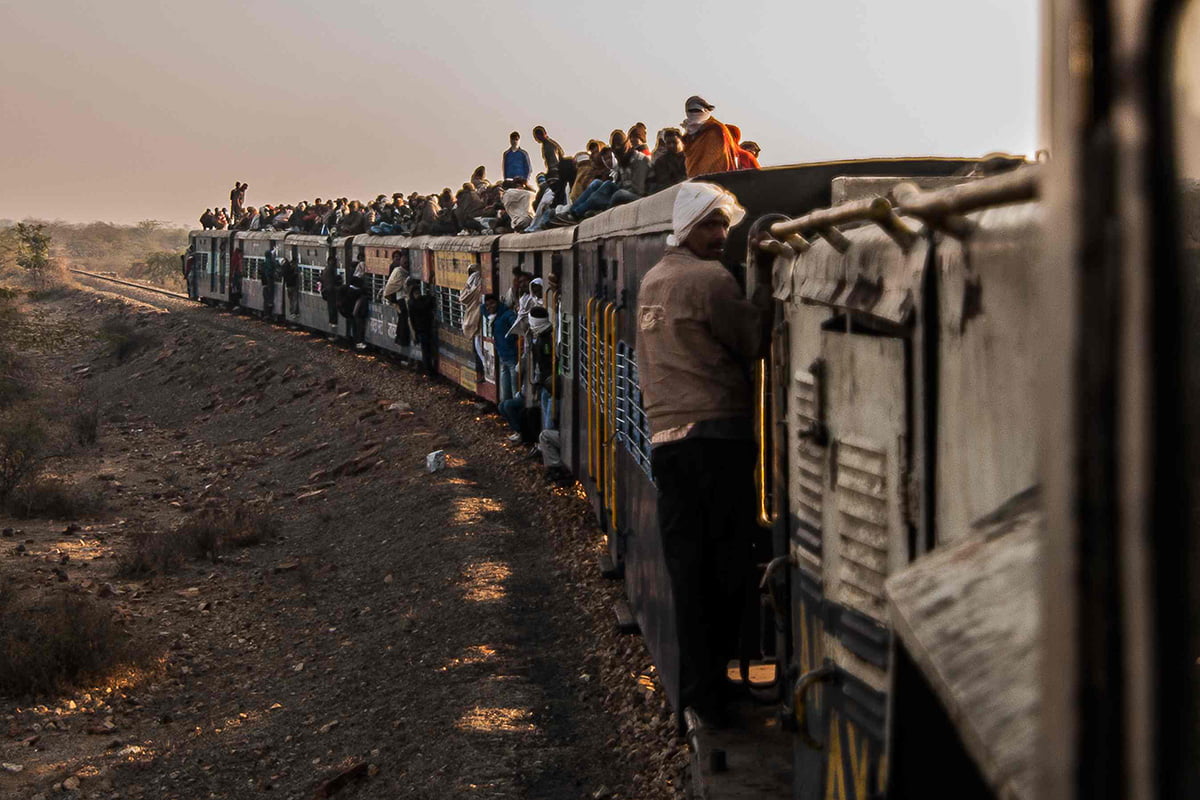 The train as seen from the Driver’s Cabin. It looks almost like a floating strip of humanity.

Ritayan had mixed feelings about the upgradation. On one hand, travel would become a lot more convenient for all those people. But on the other hand, something of that accommodating warmth would be lost. He had never been to comfortably uncomfortable in a press of people. He then consoled himself that the upgradation would take some time. Until then, this anarchism would negotiate between nostalgia and oblivion and chug on. 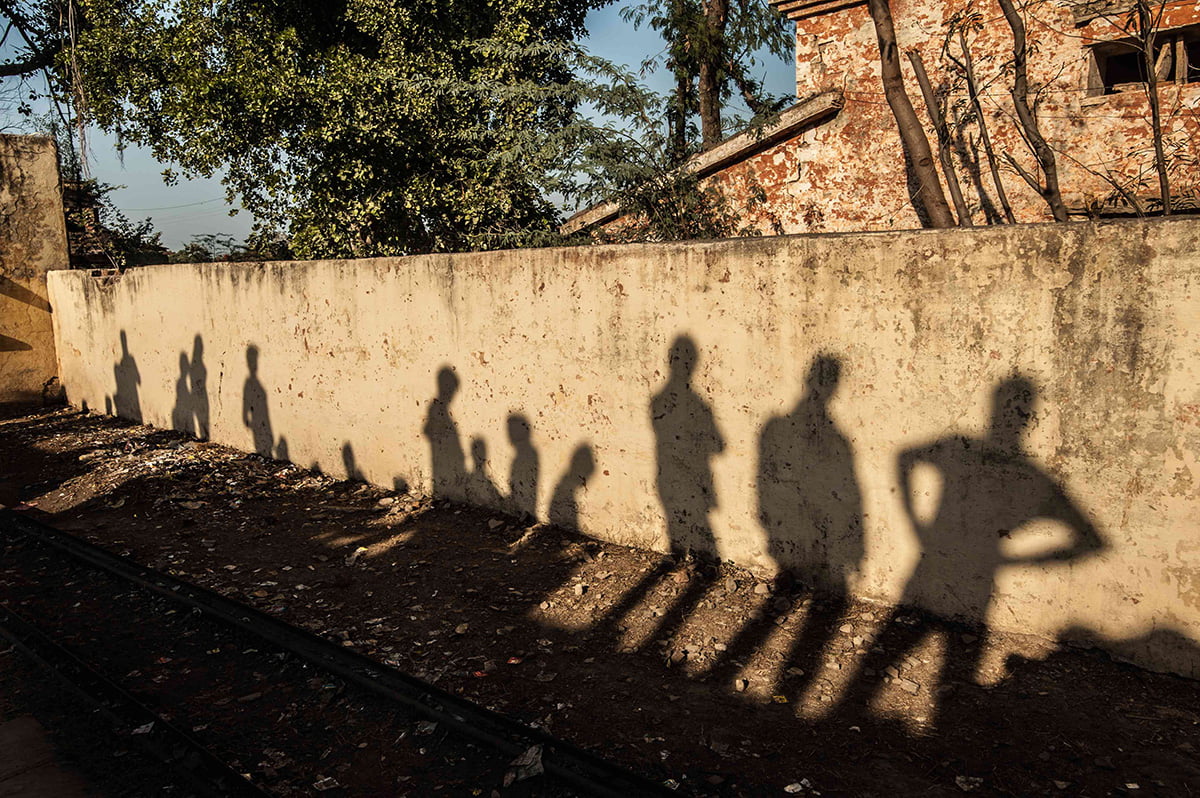 Passengers on the rooftop stretch out their limbs while the train halts at a station. 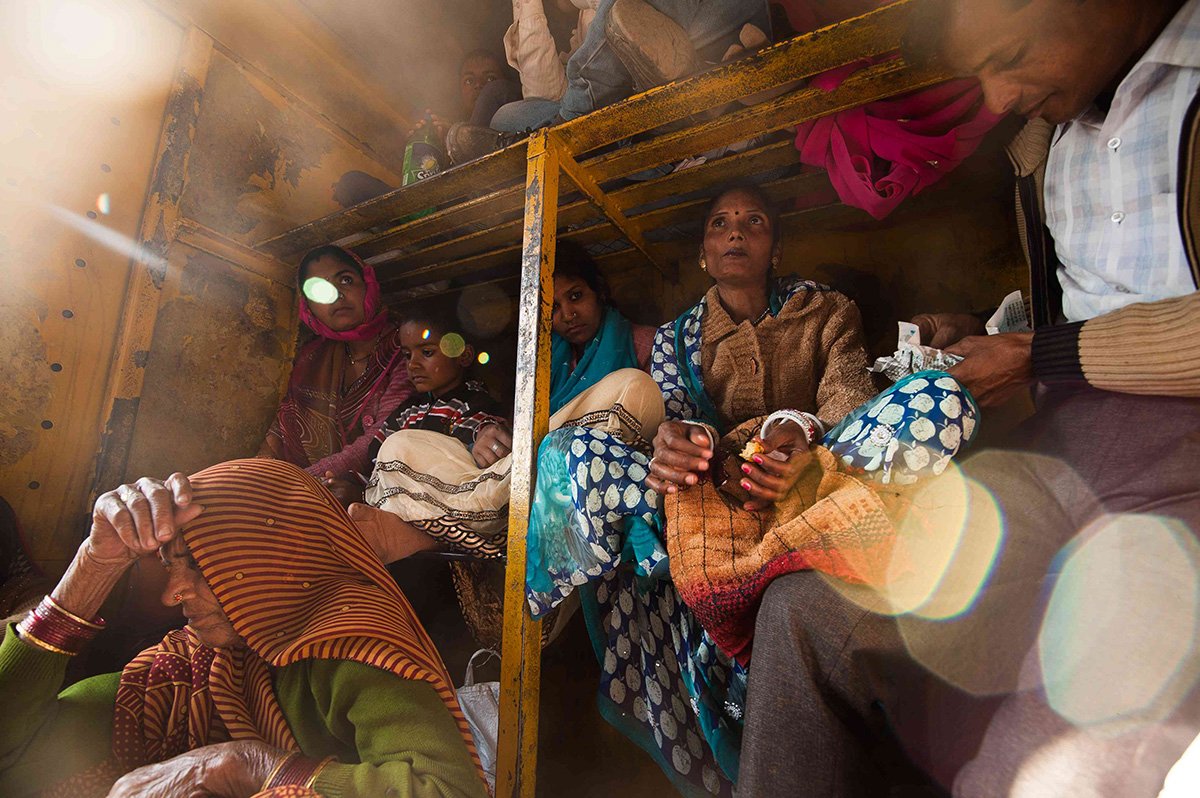 Passengers sit on every inch of space available inside the train coach. 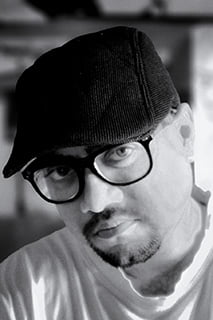 Ritayan “Rikh” Mukherjee is an independent photographer and short term Consultant for WBG. His work has widely published by different national and international platforms. In 2016, Ritayan nominated as a fellow for The People Archive of Rural India (PARI) and in December 2018, Ritayan got selected as a grantee for prestigious Sahapedia Frames Photography Grant. He also has a contribution to two books – Calcutta, Then & Kolkata Now by Roli Publication and People Like Us by The People’s Archive of Rural India. Currently, he is accomplishing his childhood fantasy about living with nomads!