A firm believer that an animal photographed along with its habitat brings in greater value to images and enables a photographer to tell a story better. 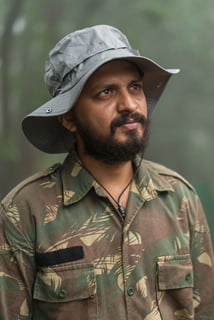 An engineer by profession who left his high paying full-time job to dedicate all his time and devotion to the observation, study and documentation of nature, wildlife and conservation, Soumabrata Moulick is a professional nature, wildlife and conservation photographer, trainer and speaker. Primarily interested in behavioural and conservation photography, he believes that knowledge and awareness is the key to conserve our natural heritage. Devoting most of his time to the documentation of nature, he loves to share his knowledge through his writings and workshops. Through his works, he aspires to contribute towards the conservation of fast vanishing natural wonders of the world.

In this interview for Exposure, Soumabrata talks to our editor Debarshi about his journey of photography.

1. Soumabrata, I would like to know about your sinusoid journey in the world of photography. Please, tell us how you started photography and how you decided to take up the most challenging wildlife genre and make it your own ball game.

Hailing from a defence forces background, I had a rather fortunate childhood, growing up in areas which are well preserved in terms of natural heritage and are rich in wildlife. Proximity to the wild sparked an interest and made me an ardent admirer of nature from an early age. The camera, especially an SLR in those days had a more revered status as few had them. I was lucky to have got a chance to use them; initially, for documenting our travels or during vacations, and as I grew up more seriously towards documenting anything interesting I came upon in the wild. Exploring photography as a means of artistic expression was not a conscious choice but happened over time as I grew more adept with the tools available to me and eventually started expressing my ideas through images. As I look back, I see what a powerful tool this little light-proof box is, and how effective it is in training one’s eye to see the beauty in the most mundane of situations. I can very well say that photography is not just a hobby or profession, it’s a lifestyle that one adopts with passing time. Maturing as a photographer has made me more aware and appreciative of my surroundings. 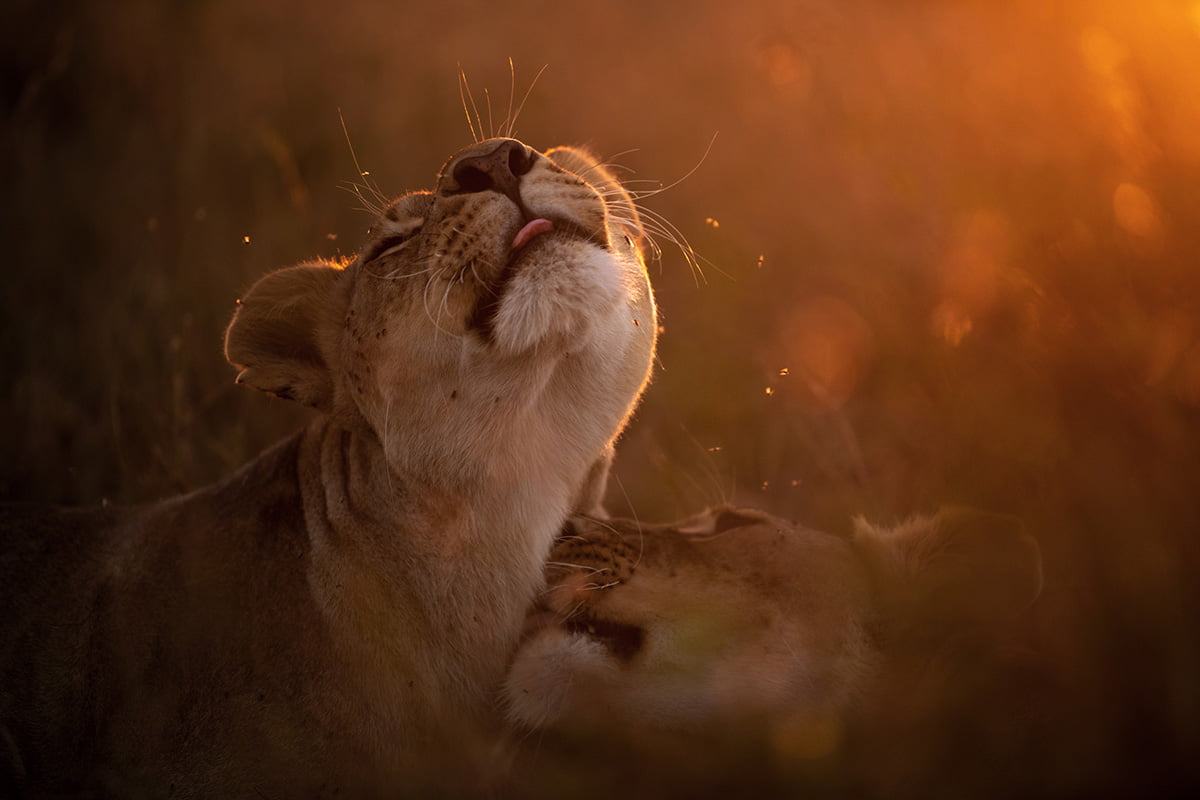 2. You have some magnificent collections and some of them are astonishing. I stuck to one of your images that you shot recently in Uganda where a chip is curiously looking up. Can you please describe something regarding this image?

That image is of an adolescent chimpanzee from Kibale national park, Uganda. Chimpanzees are quite challenging to photograph as even the habituated chimpanzees won’t stick around for long on the ground once you have caught up with them while tracking, so one needs to be ready and quick to grab the pictures. Fortunately, they are so similar to us that making a connection with an audience with a chimpanzee image is not difficult. In the image, he is looking up to check on some rustling of leaves in the canopy and that resulted in that curious expression. A noteworthy technical point on the image is that the focus is on lips rather than the eyes which is opposite to what is conventionally impressed upon wildlife photographers when they start out; what I mean is these “so-called” rules can be broken and still create moving images.

3. Your work “The pilgrim saga of Ranthambhore” got a lot of attention in the media. It’s an issue no one talks about, pilgrims like this are a potential threat to both their and tigers’ safety all across India. Can you please put some more highlights into it?

It is indeed an issue that no one talks about. Most conservation images that we come across are around the narrative of how damaging the development and industrial encroachment of the wild is. The issue of pilgrim movement in protected areas almost always remains ignored maybe because religious sentiments are particularly flammable in this country and surprisingly it is still legal. So, I decided to bring this issue to light as it is going to further escalate and contribute to the man-animal conflict scenario given the rate at which our wilderness is shrinking. 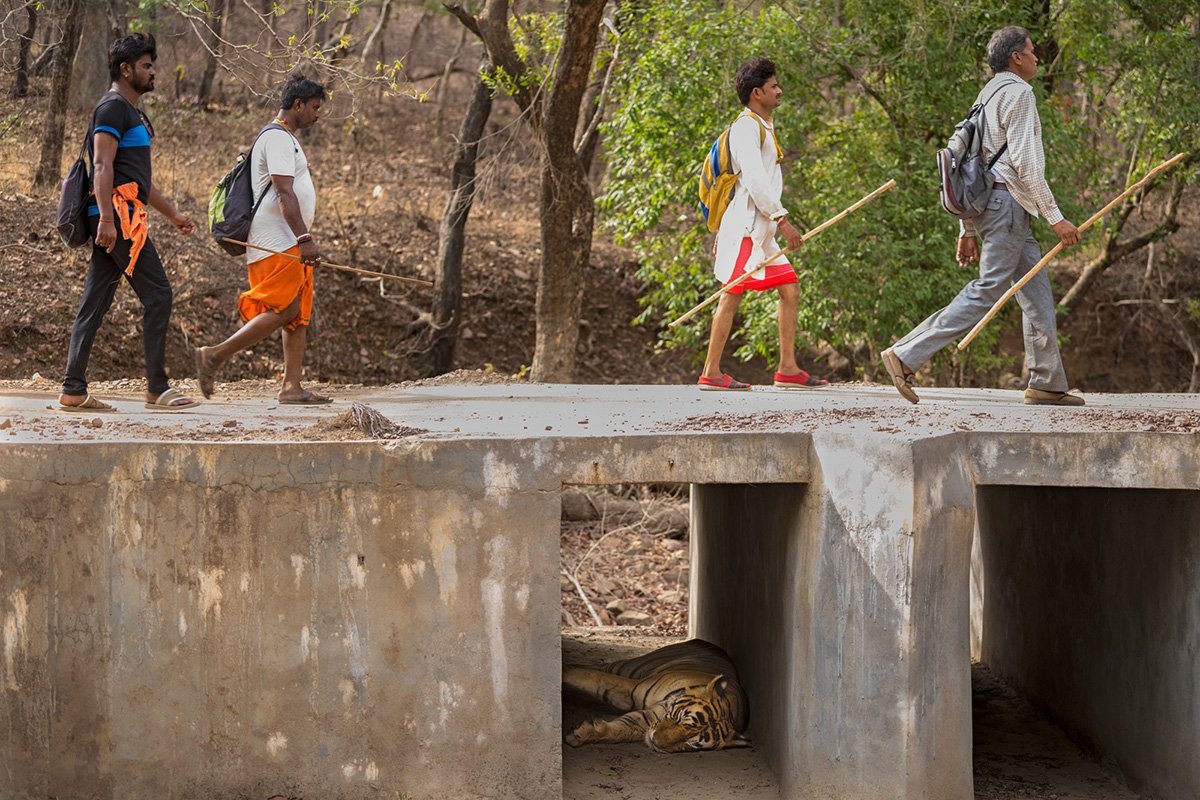 In the name of God

4. Saffron Striped Tide went on to win various prestigious awards and became viral in the internet world. When did you see that particular frame, what thought crossed your mind?

The first reaction when the particular incident occurred was to warn the pilgrims of the tiger’s presence. When they didn’t listen and were adamant on crossing the bridge, I took it as an opportunity to make an image which would give a face to the issue and positioned our vehicle in a manner that we could photograph them crossing the bridge while the tiger slept underneath it. I’m happy that the wider reach the image has got many talking about the issue and made them aware that this particular issue exists.

5. Every wildlife photographer has a dream to capture a species in their natural habitat. Do you have anything of this sort? If yes, please tell us about the same.

I’m a firm believer that an animal photographed along with its habitat brings in greater value to images, in contrast, to singled out portraits that we see mostly on the internet; for the record, I do not have anything against portraits, it’s just my opinion that animal in habitat images just enables a photographer to tell a story better. You can see that most of my images are made with a wider perspective. It’s difficult to name one animal that I would like to photograph along with its habitat, I want to do that with all the subjects I work on but it’s not always possible to execute it. 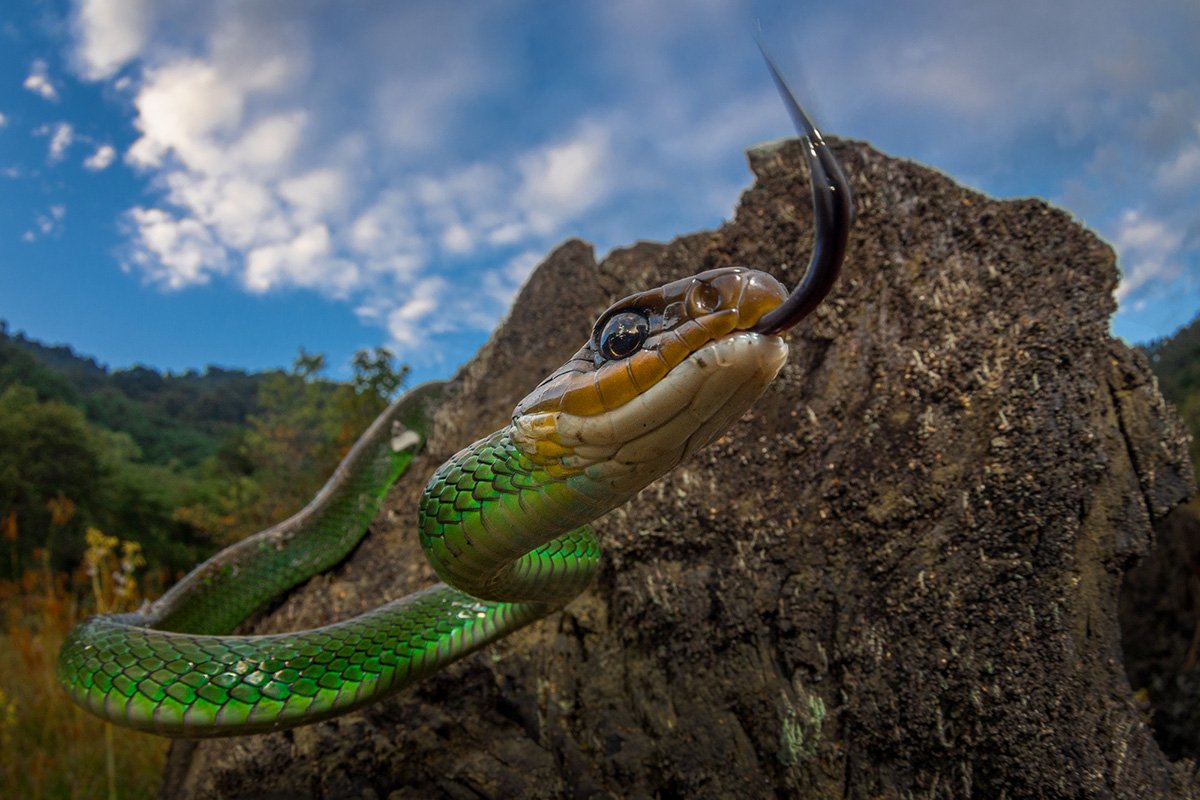 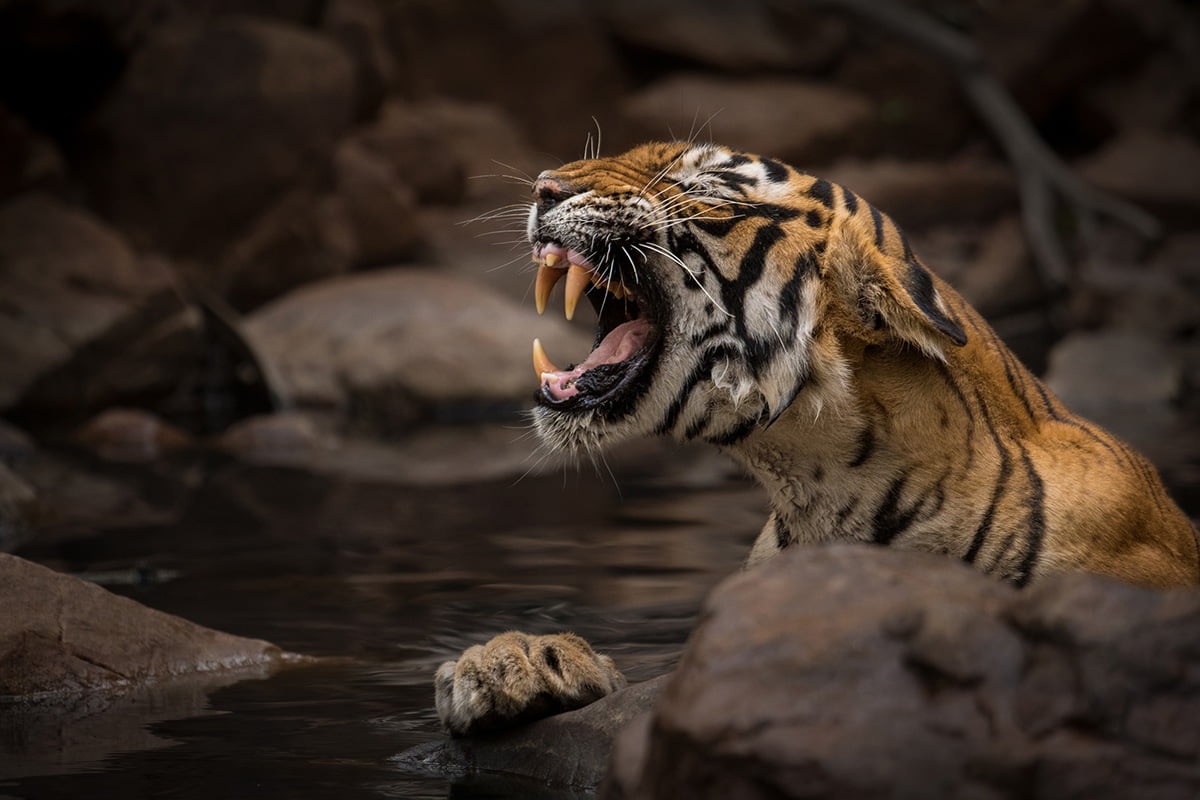 The angry mother of Ranthambhore

6. You have won multiple awards and recognition in most of the premier names of the photography industry. What was the first accolade and how did that change your photographic life?

The first major recognition I consider came in when I got selected for the Saevus Youth for Clicks event a few years back, even though I came in second in the competition, it is where I met Dr. Caesar from DCP Expeditions and it set me on a path to eventually become a full time nature photographer. 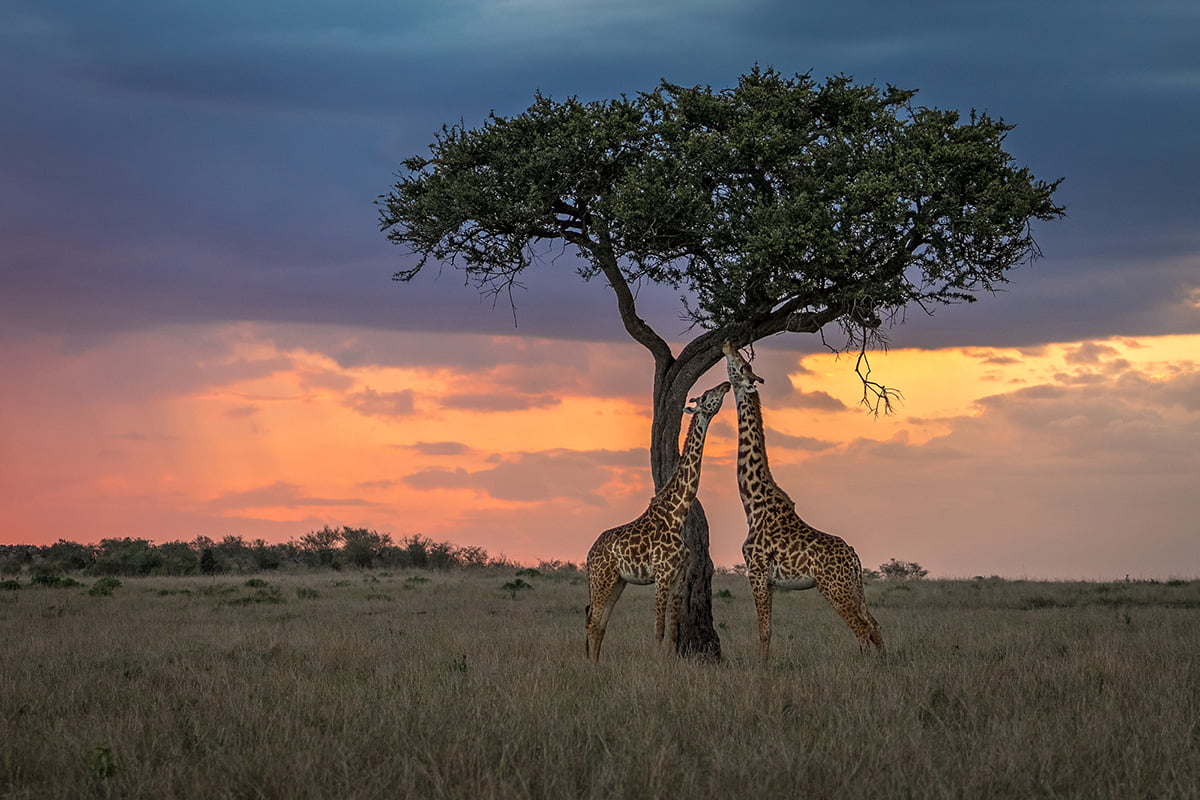 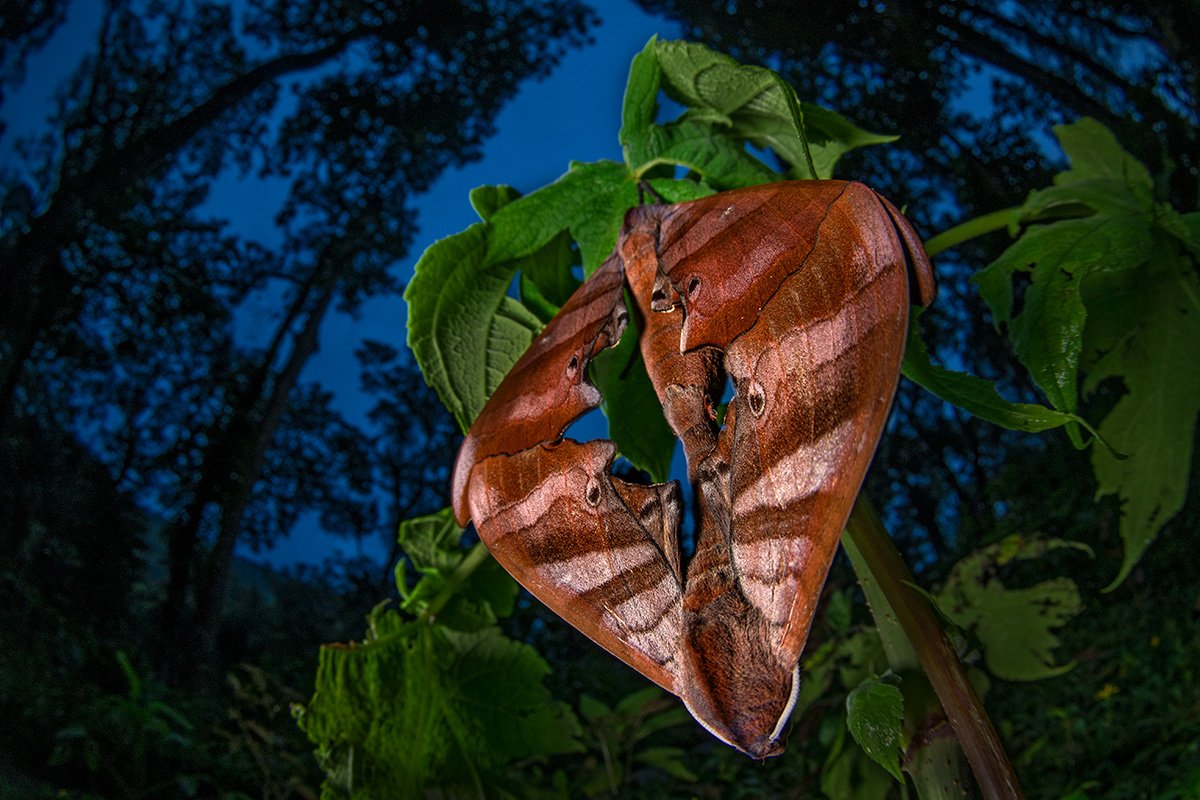 7. You are associated with the prestigious DCP Expeditions as a master class mentor. How important it is to have a good mentor to understand wildlife photography? Do you talk about habitat conservation before going into compositional techniques and framing?

It is extremely important to have a good mentor to understand wildlife photography like any other art form. A mentor gives you direction and sets you on a path to explore your own style in due course. Yes, I talk about habitat conservation before going into compositional techniques and framing as it’s imperative to understand a subject and its conditions well before going on to make images. 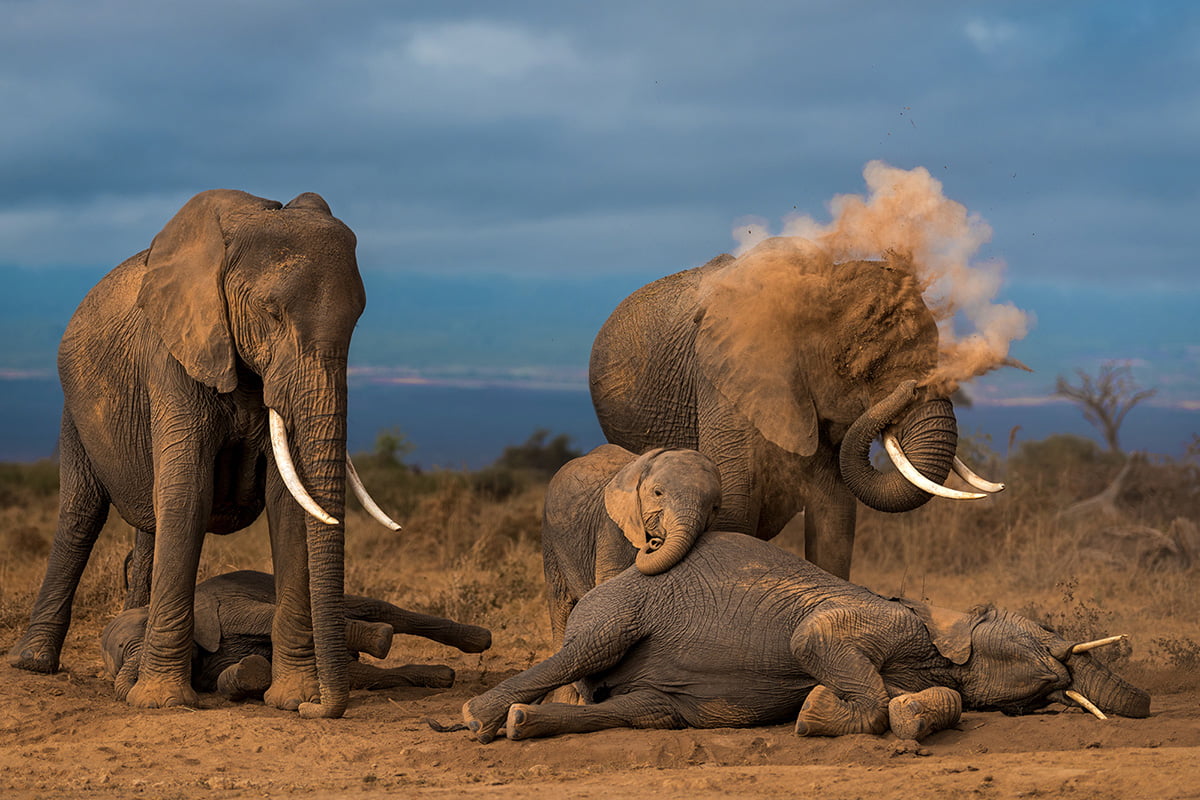 8. You have covered various bio reserves and national parks till date. What is the most decisive moment captured by you in your flourishing career as a wildlife photographer?

It’s difficult to single out one decisive moment, but there are moments which stay with you for a long time after having captured it. For me, fortunately, there have been many, some notable ones are gaining the trust of an elephant matriarch to show her infant, gaining the trust of a wild rhino to sit beside it for a long time and photograph, people walking over the bridge in Ranthambhore etc. 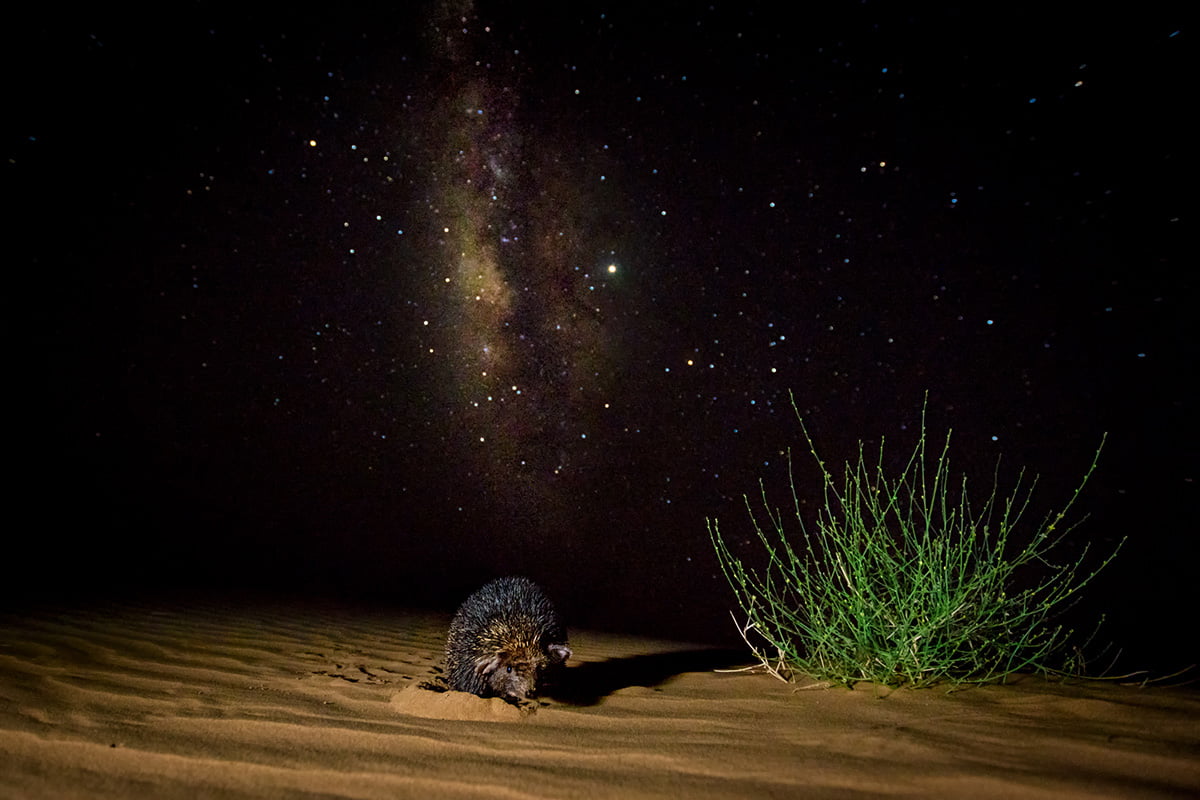 Hedge feeding with milky way in the background 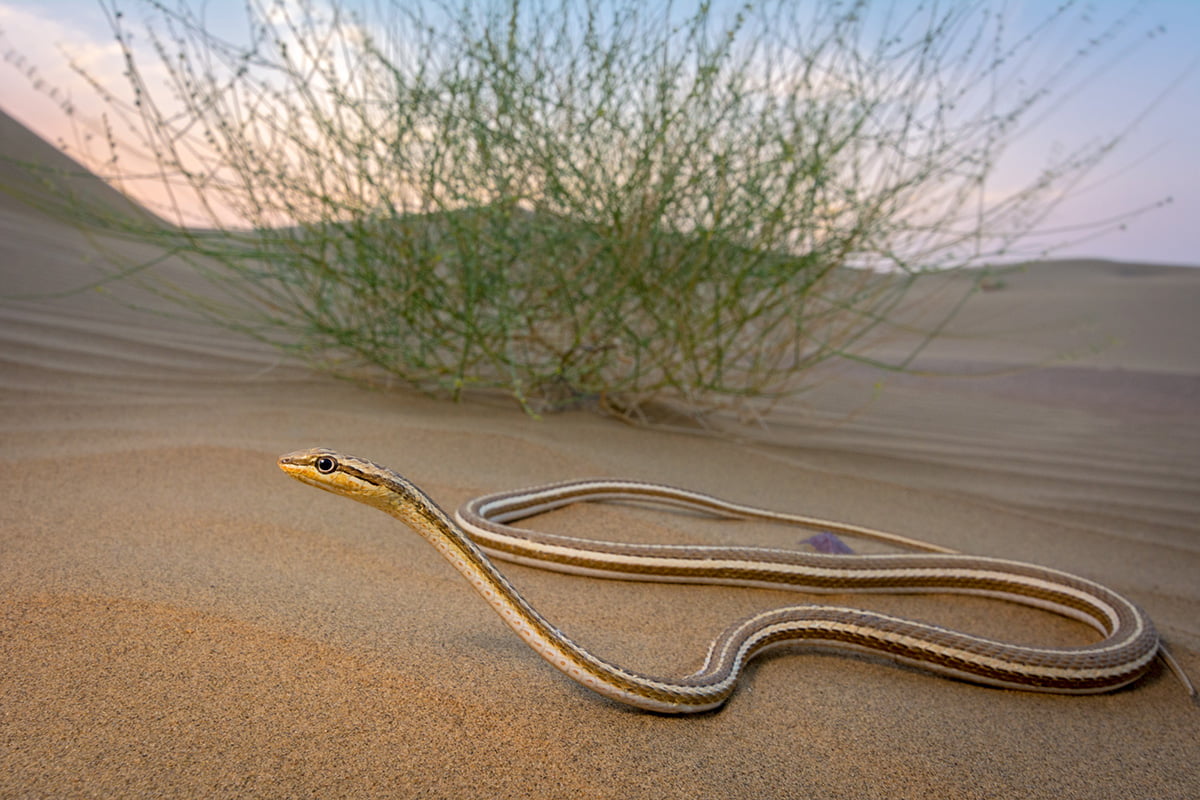 9. In the field, it might be difficult to find the subjects to photograph. Do you study something about animals such as habitat or behaviour? How important is it in wildlife photography? And how long do you typically wait for a shot?

Yes, I do and when it comes to research, there is no fixed timeframe as such. Usually, for animals which have been photographed earlier, the job is relatively less time consuming as some information is already available like the locations and/or best time of the year to photograph them etc.; while for lesser-known species, it takes more time as some collaborative effort is needed with our friends from the scientific community, forest department and locals of the area where the species is found.

Waiting for a shot again has no fixed time-frame either, I’m all for previsualization and sometimes it takes years to find the situation when everything comes together to make the right image. 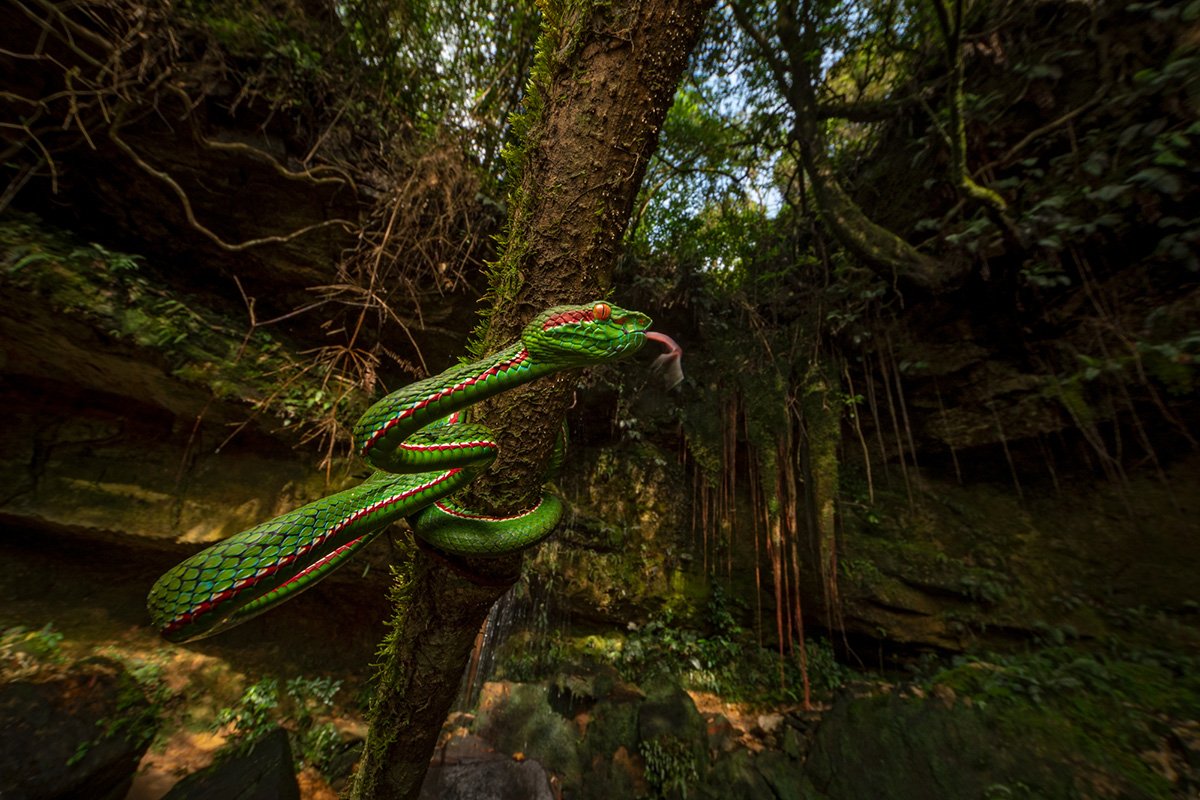 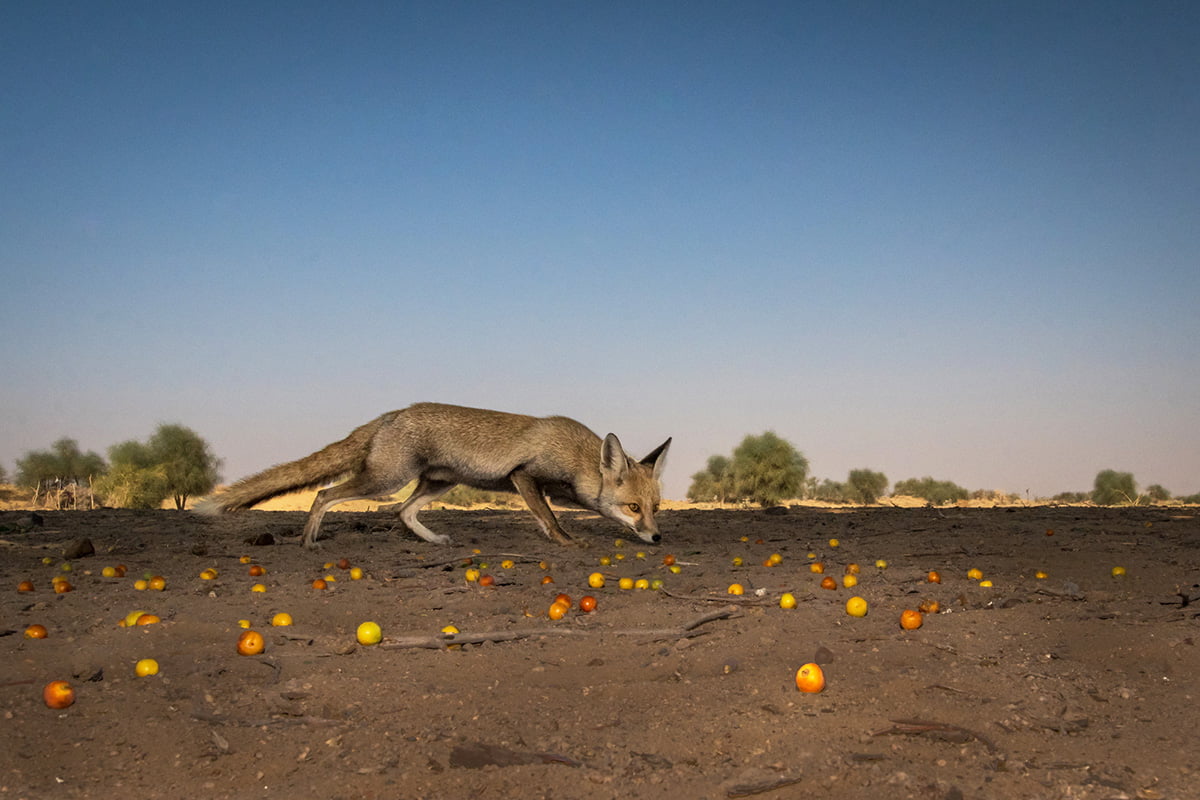 10. Every person does not see the thing the way, a photographer can see. It’s our sole responsibility to view those rare moments and showcase the same to others. In order to do this, every photographer should carry some ethics which won’t destroy the original story of the frame. Do you believe these are being thought about and spoken in the world of photography?

No, not much is spoken on the subject normally. When people start out with wildlife photography it is very easy to fall into what I like to call ‘the photoshop trap’, taking images and then completely altering them is common nowadays. Personally, I feel whatever one does to an image should be declared so as not to deceive your audiences. If I don’t get the desired image, I would prefer going back and reshooting than resorting to photoshop. 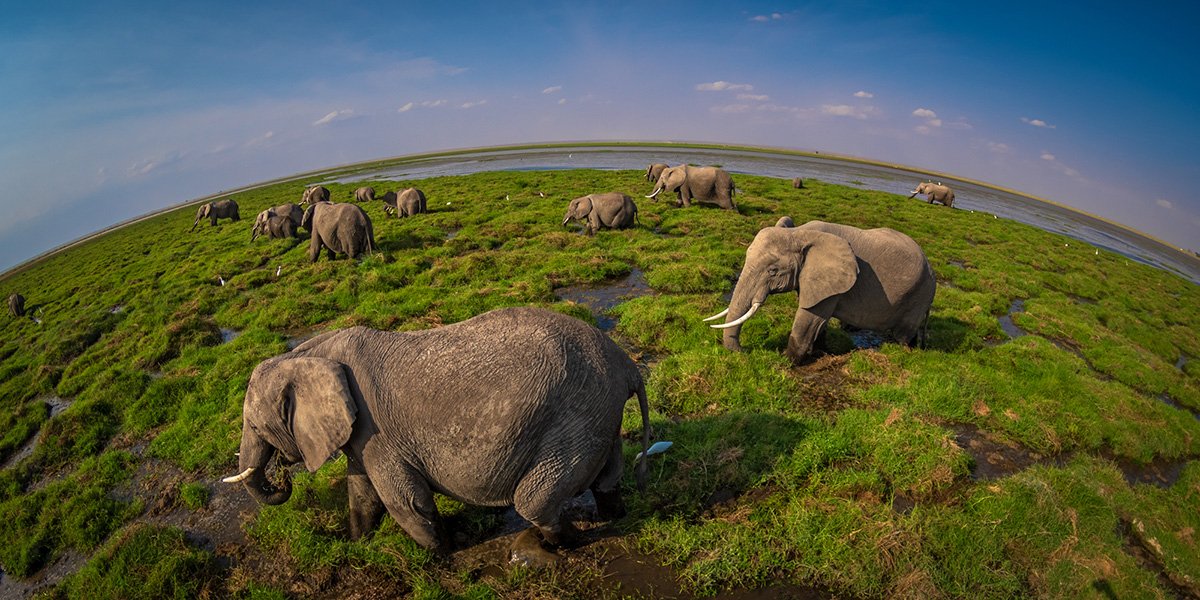 Elephants feeding in a swamp in Amboseli

11. Have you thought of writing a book which can be used as a medium to tell the general people about conservation techniques of indigenous species and the natural environment?

Maybe someday. It is a dream project for any conservation photographer.

It’s really simple actually, start with whatever your budget permits and slowly climb up the equipment ladder once you start growing photographically. Equipment matters but our photographic ability are the limiting factors, not the equipment one uses. Personally, I nowadays use my cheap wide-angle lenses far more than I use my super-telephoto primes. In short, get the best available kit with the budget you have, that’s the best gear for you in the world. 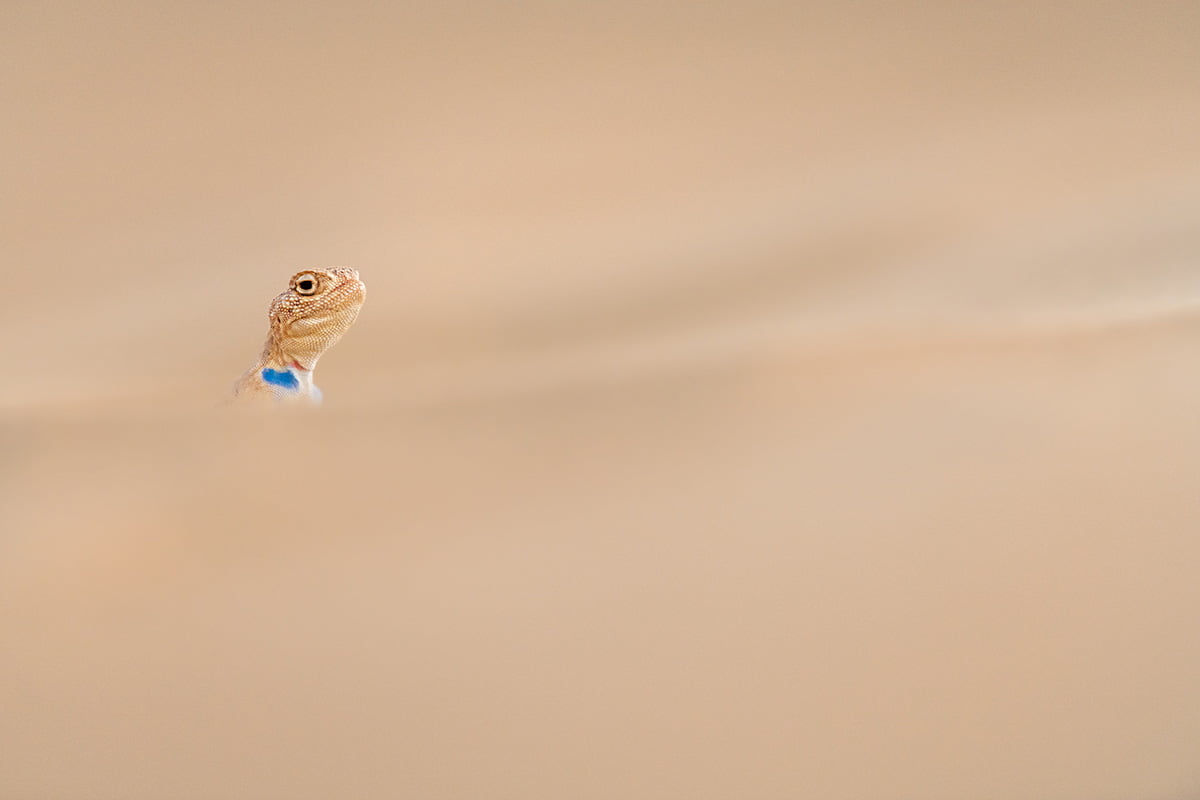 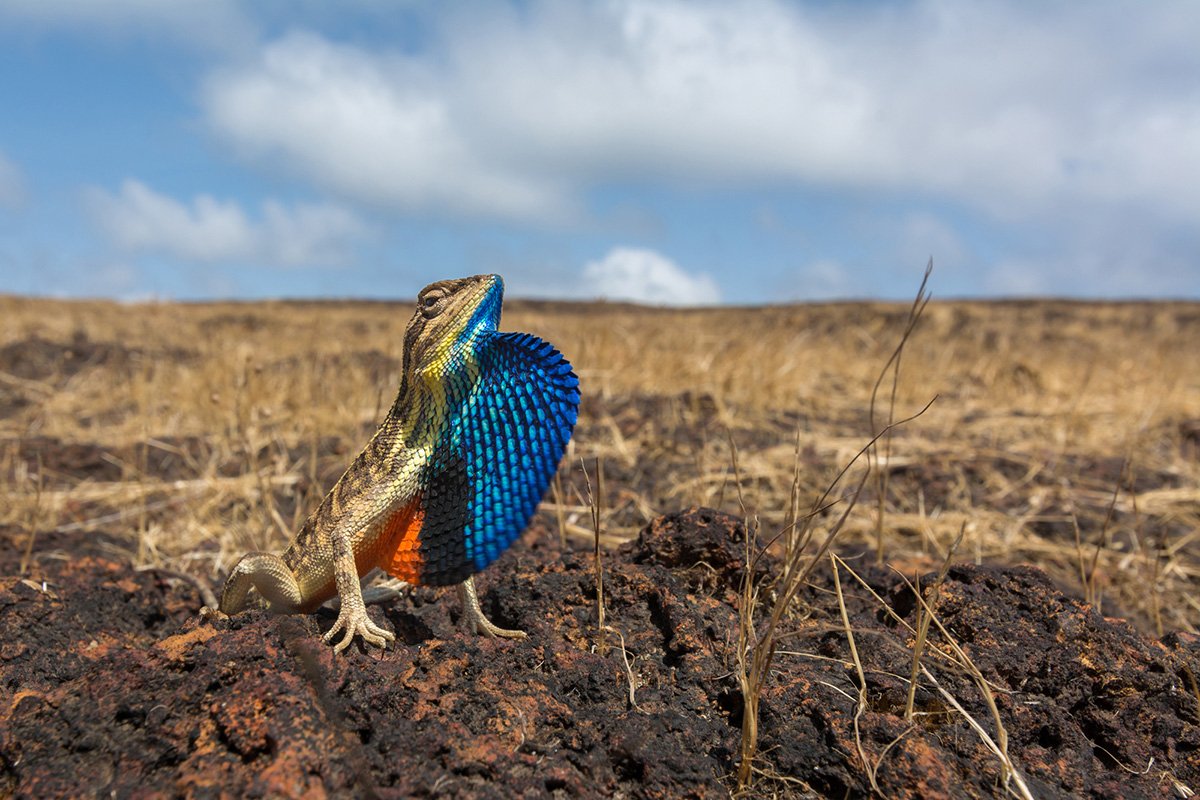 13. I believe you shoot in RAW and process your own images. What is your take to have an optimum level in post-processing so that the frame does not look out of the place and in wildlife photography, is it very important to keep the same in mind?

A RAW file has all the information when exposed correctly which one has to tweak properly to get the best out of it. As a nature photographer one has to be true to her/his craft and make sure not to add/remove elements from a picture. A bit of white balance, colour and contrast correction and some dodging/burning are all that is needed to get beautiful looking images if shot correctly. 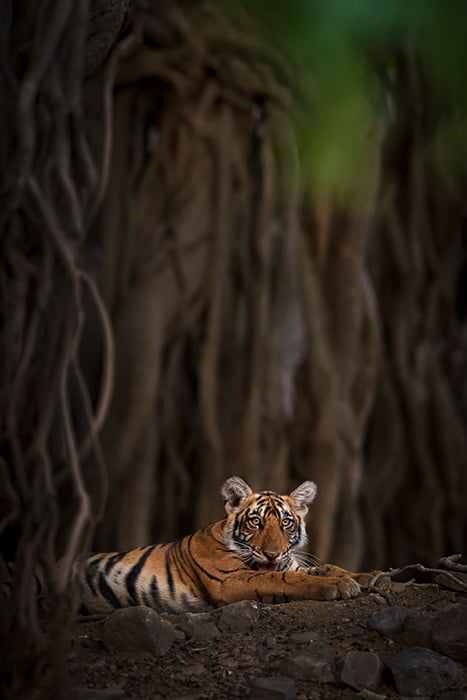 Tiger cub under a banyan tree in Ranthambhore

14. Do you believe wildlife photography has an effort on conservation?

Definitely, it is currently one of the most powerful conservation tools available. Photographers not only spread awareness about issues and showcase the beauty of a place but also inspire others to visit these places, this directly contributes to the local economies of remote areas. We need to give people living in fringe areas an incentive to save their forests, if they can earn a livelihood from it, they would protect it with their life! 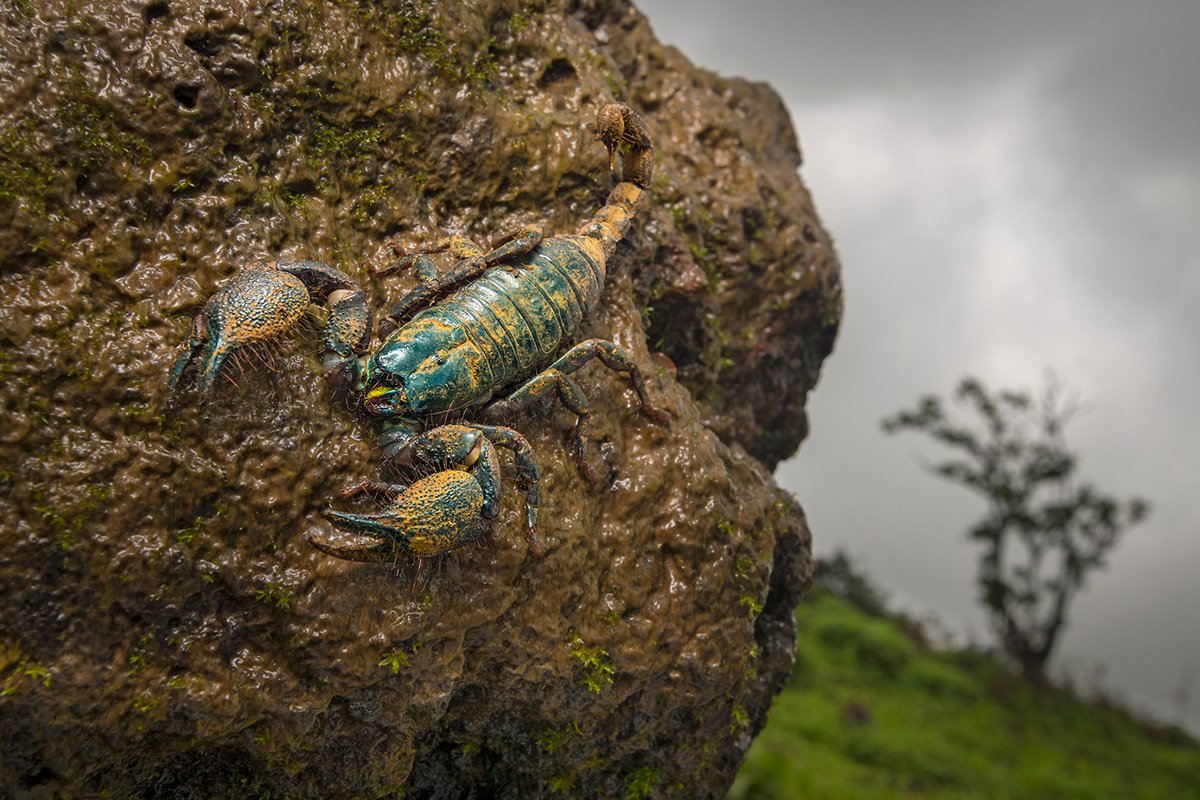 Heterometrus sp in its habitat 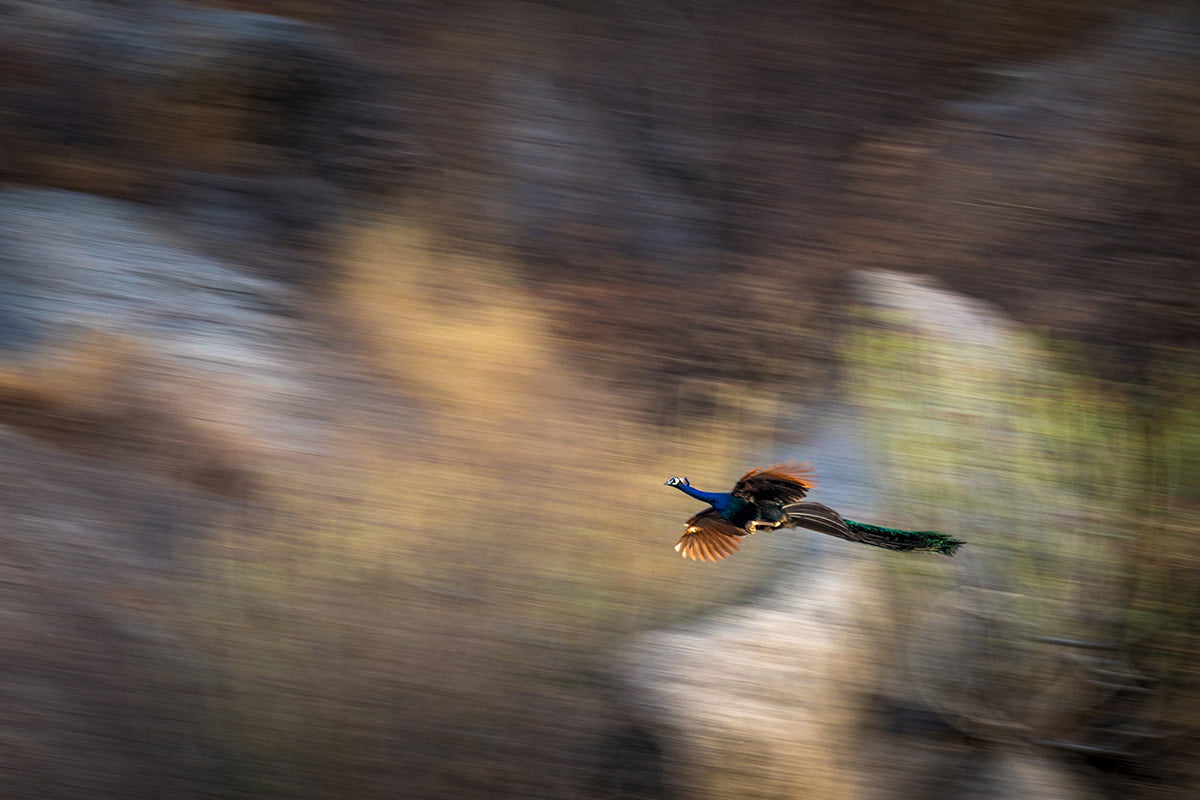 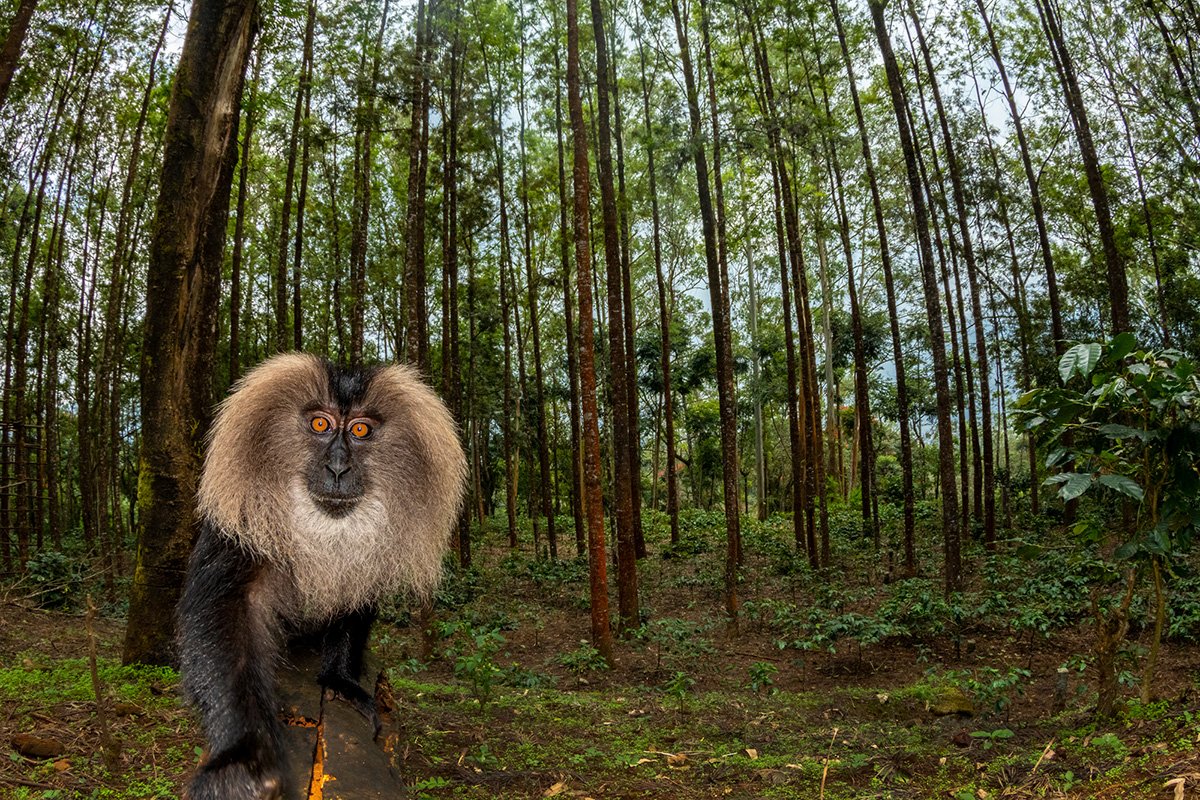 The curiosity of a lion tailed macaque

15. Let’s wind up with the most asked question, your inspiration in the world of photography.

This is difficult to answer as I’m inspired by many. Some of the initial inspirations were Frans Lanting, Michael Nichols etc. 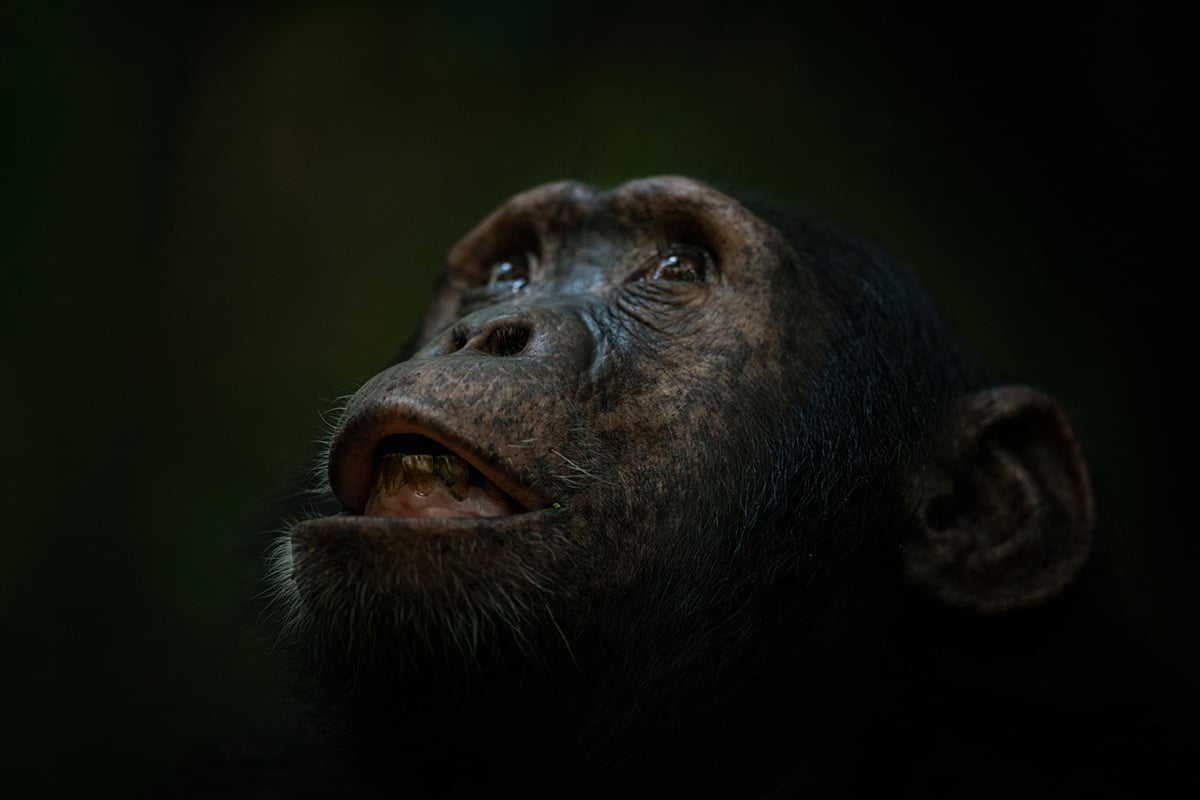 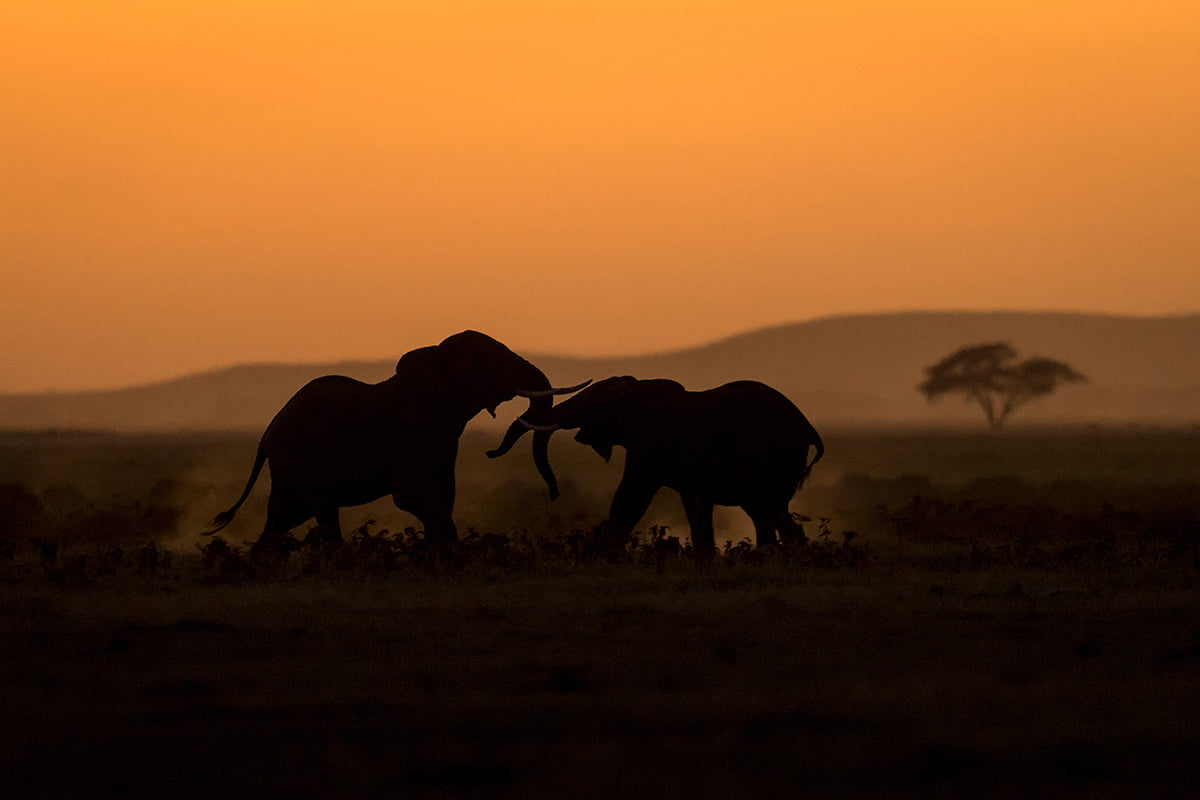