Kerala is a state in the south of India that has been proudly calling itself as ‘Gods Own Country’; and within the villages in and around North Kerala, is a dance form is famous wherein the performer is considered as an incarnation of God himself. The Theyyam/ Theyyattam is a traditional art form that combines the ritual worship of a local deity with various folk dances wherein the dancer plays out the folk story while invoking the Gods to the accompaniment of music and prayers. 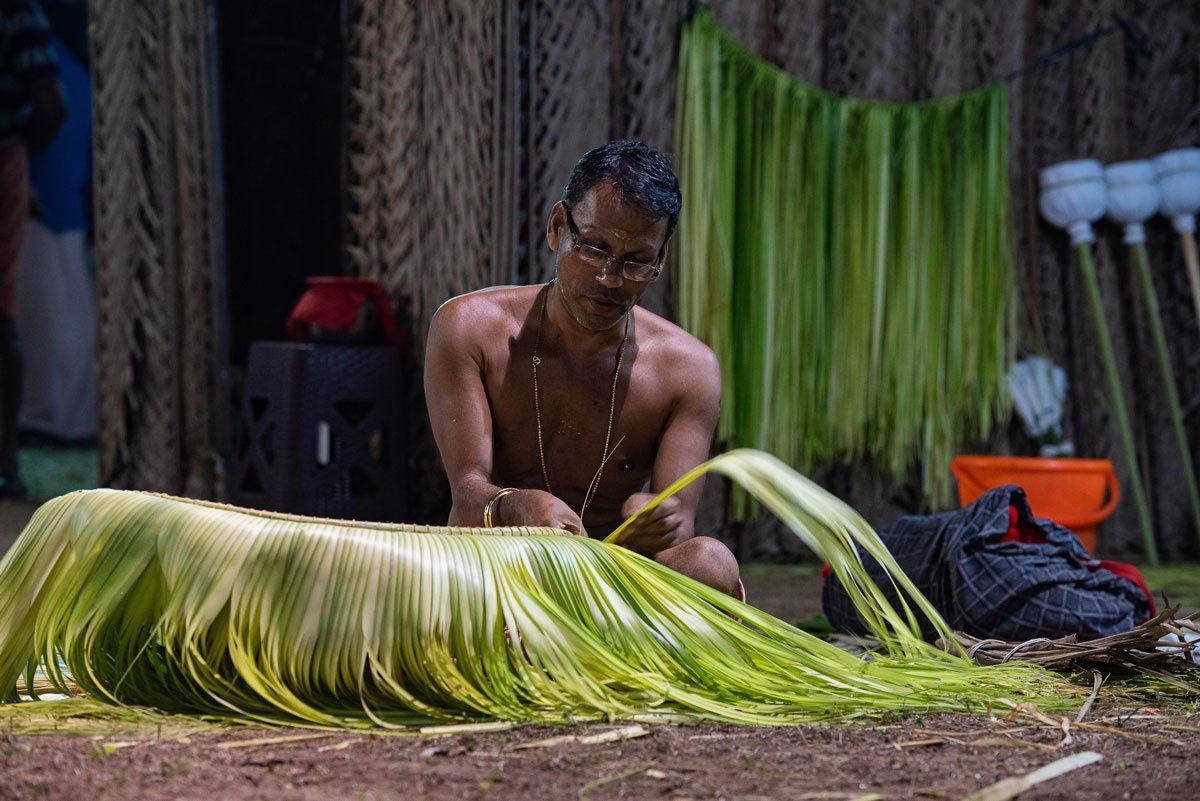 It is assumed, over 400 different types of Theyyam exist that worship different powers – it may be powerful spirits, respected ancestors, local folk heroes, holy trees/animals/serpents or it may be the usual gods (devs), goddesses (devis) or even some fearsome witches (yakshis). 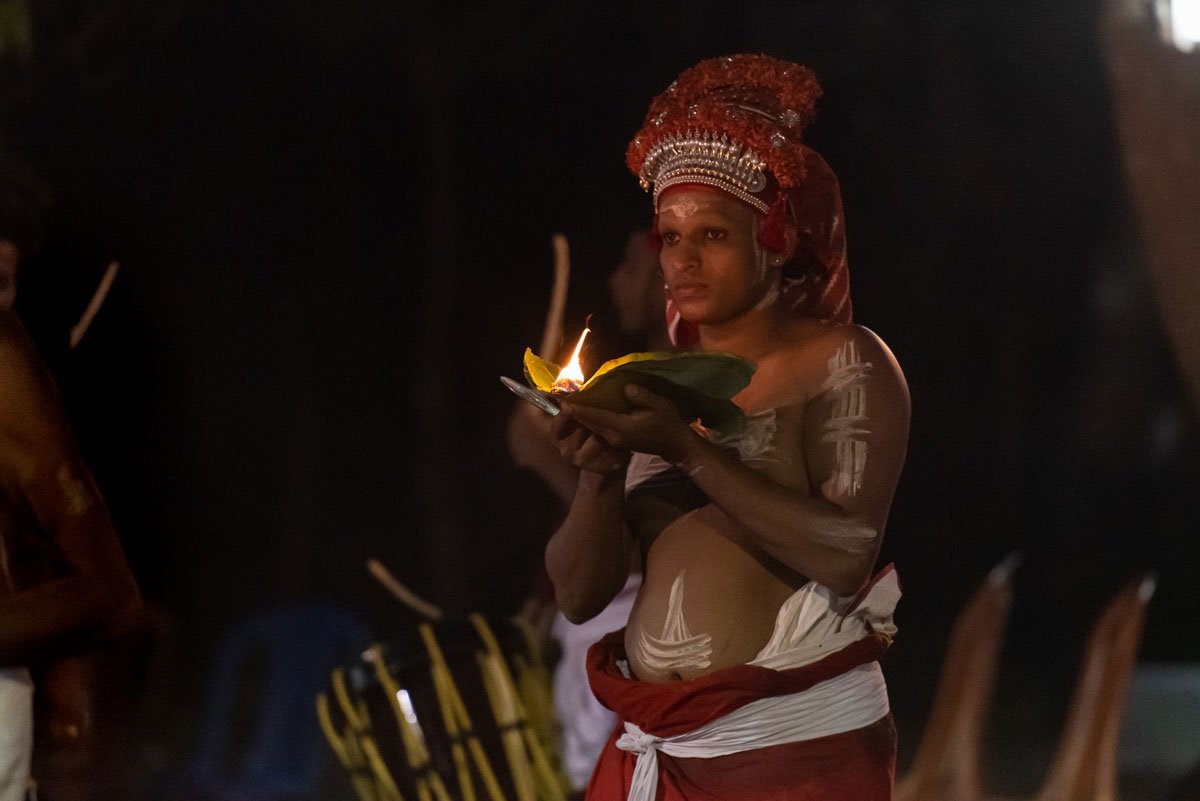 The season runs from December to February; during those months, there are multiple performances on a daily basis scattered all over the countryside. The performance is observed around the local shrines or in a clearing in the forest with spectators standing all around akin to an open-air theatre. It’s a festive atmosphere that often begins late in the evening and concludes well past dawn. 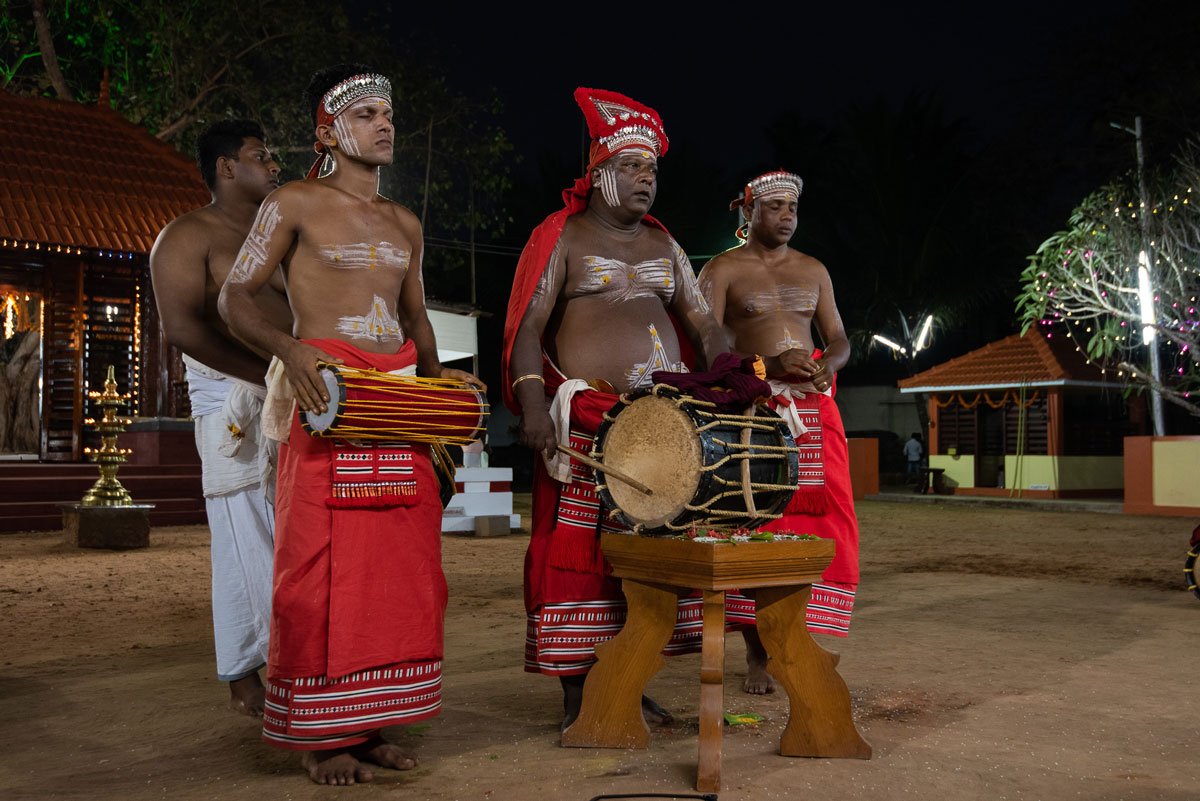 The Thottam is a prelude to the actual Theyyam performance wherein the artist is dressed up with basic costumes and minimal face paints. He is initially taken around the local shrine and its neighbourhood to with the accompaniment of drum beats and the narration of story-songs that invokes the deity of the Theyyam which is to follow. These performances begin with a series of delicate dance moves and gradually progresses to a set of stunning acrobatics. As the drums beat up a tempo and the fire torches light up the air, the dancer moves around the circle of devotees as if in a trance – sword in one hand and shield in the other – jumping, leaping, pirouetting, doing somersaults and splits like a one being possessed. In short, it’s a performance that dazzles the awestruck onlookers while reinforcing the faith of the believers that he is an incarnation of God himself. 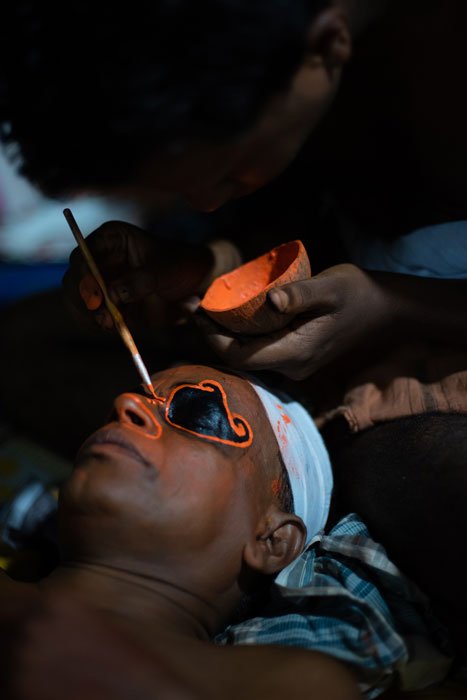 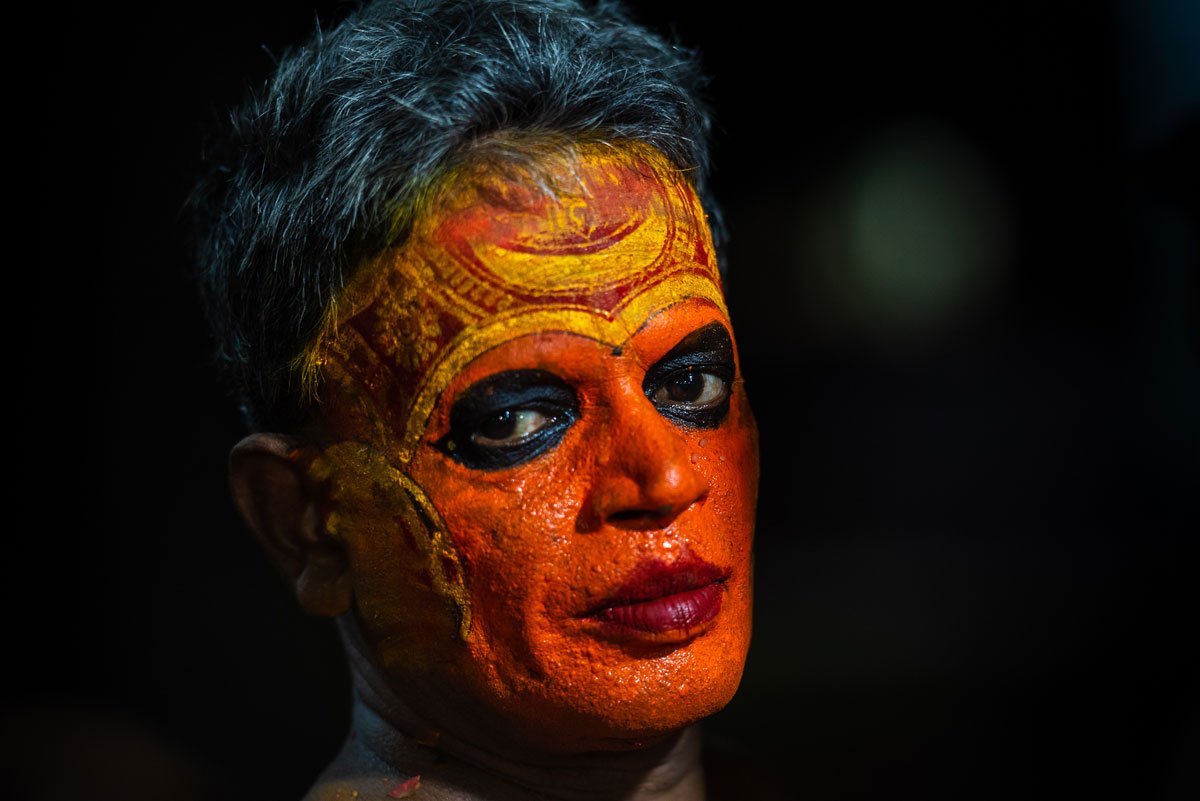 Once this primary ritual is over, the artist spend hours in the green room preparing for the actual Theyyam. The intricate face painting by the make-up artist often takes several hours; amusingly, during this period when his face is being worked on the dancer himself maybe taking a well-earned nap. In the meantime, his backroom staff can be found preparing his headgear and costumes, some of which are freshly made from the locally available palm leaves. 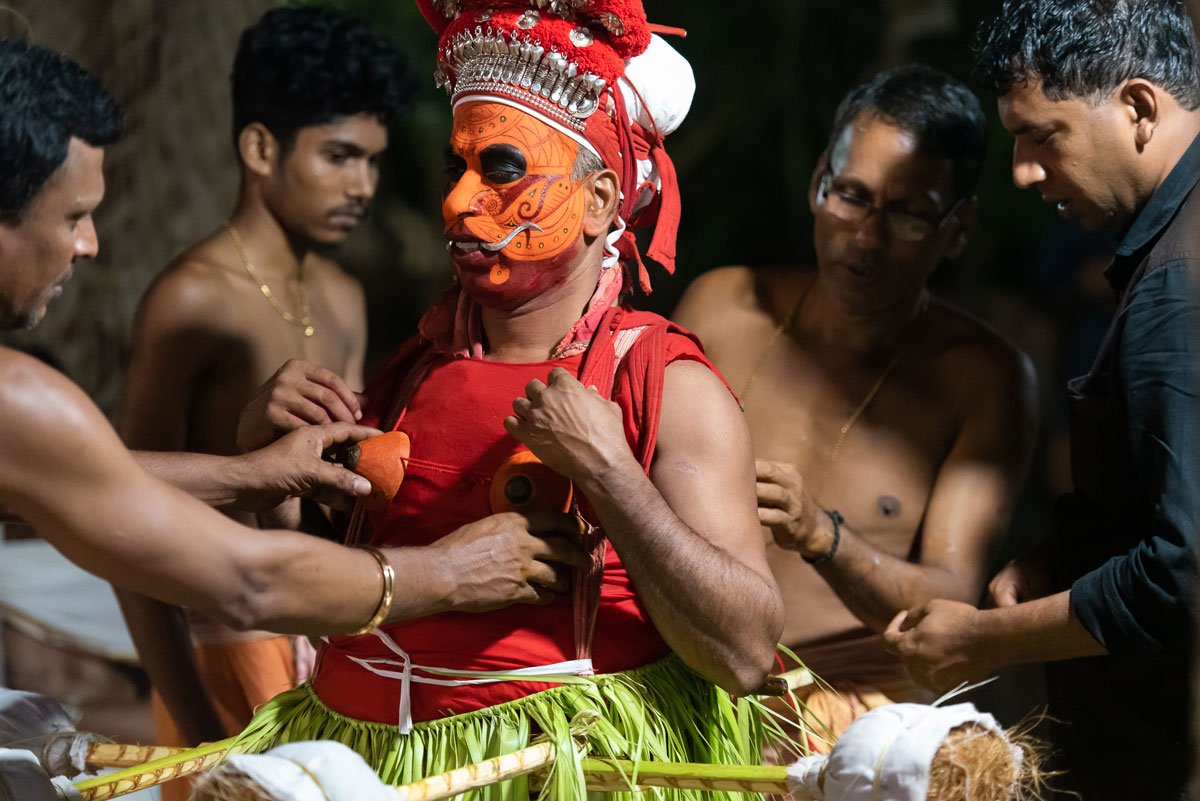 Once the elaborate costume, ornaments and headgear are donned, the artist takes a look at himself in the mirror. With the drums and bugles playing in the background, the performer takes in his face the look that has metamorphosed into that of a God. Spectators describe the artists becoming one with the deity often showing a fearless appearance and possessing a fierce voice. Passionate dancers have often described their human bodies being consumed by a spirit and being transformed into a divine vehicle to the gods – one that exits them only when the headdress is removed at the end of the performance. 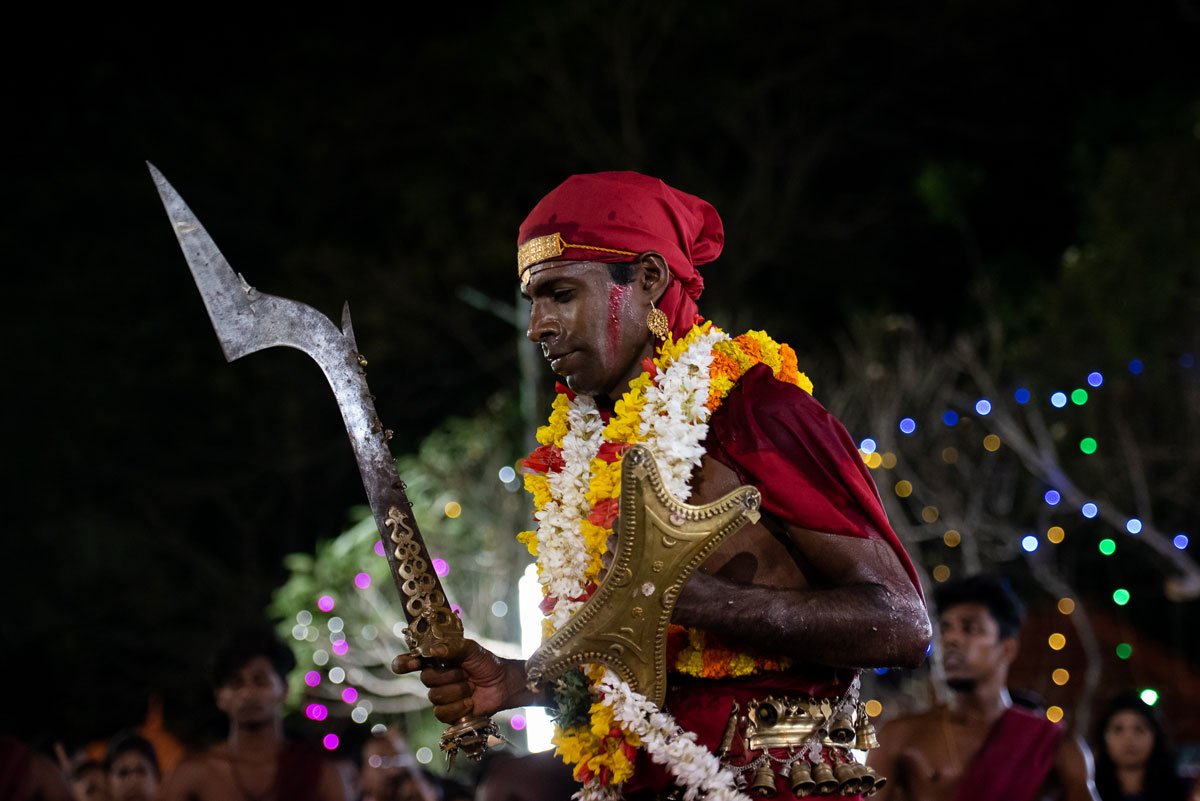 There are also other varieties of Theyyam that are performed in the midnight shadows of small clearings in the midst of local rubber plantations under the green canopy of coconut palms, lit only by a bonfire and a carpet of flickering camphor lights. Crowds of local villagers as well as visitors from far and wide assemble around the makeshift arena waiting and watching for (what has famously been described by William Dalrymple in The Dancer of Kannur as ) “that moment when the gods come down to earth and dance”. As the drummers raise their tempo, the fully adorned dancer makes a grand entry and begins moving around the clearing. As the climax approaches, he will seem to be possessed by the Gods, frenetically pirouetting around the clearing strutting and jabbing weapons- often a sword in one hand, or a bow with a quiver of arrows in the other. 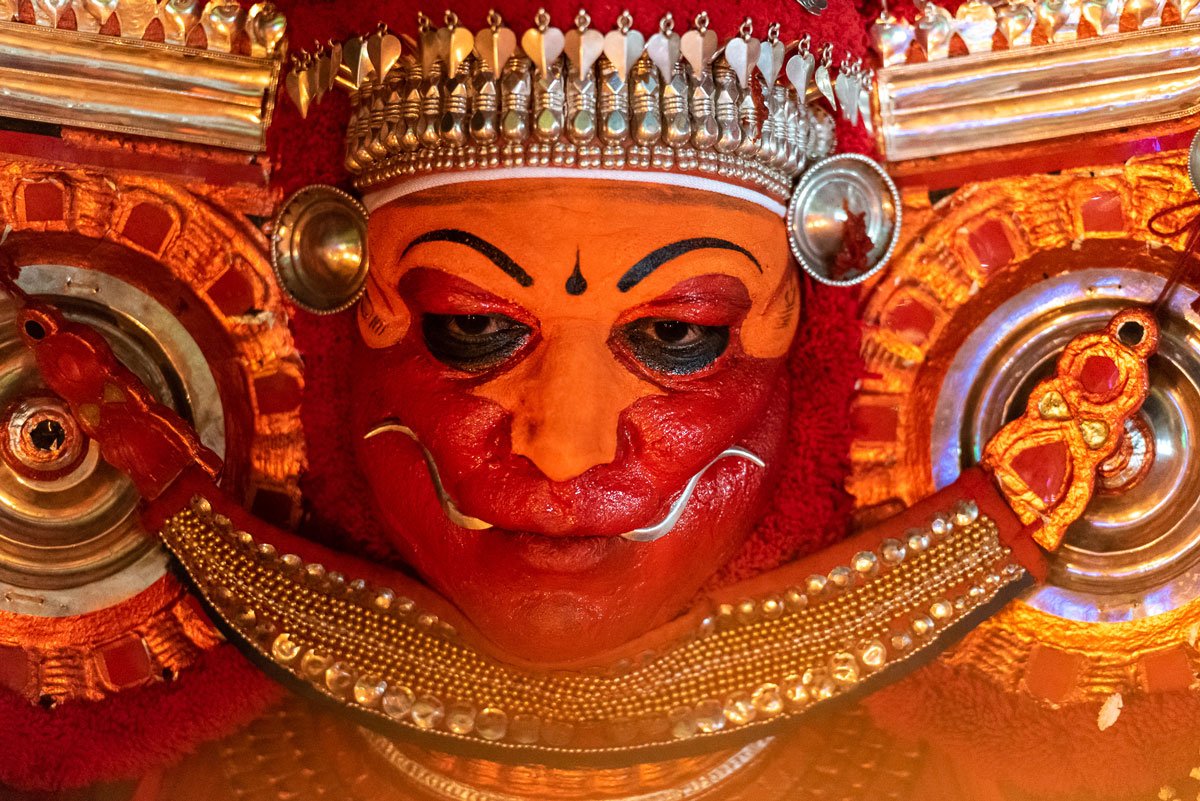 Once the dance concludes, there is a lull during which the incarnation goes around blessing the faithful, many of whom actually find solace in being able to communicate their personal problems to the Gods through this divine medium.

The word ‘Theyyam’ is derived from “daivam”- the Sanskrit word for God. These performers who are treated like an incarnation of the gods usually belong to the lower caste community as per the ancient Indian social structure. So, it is often argued that the art form became increasingly popular because it frequently depicted as a sly and non-violent resistance to the misdeeds of the upper castes – all safely enacted in the form of a devotional ritual. 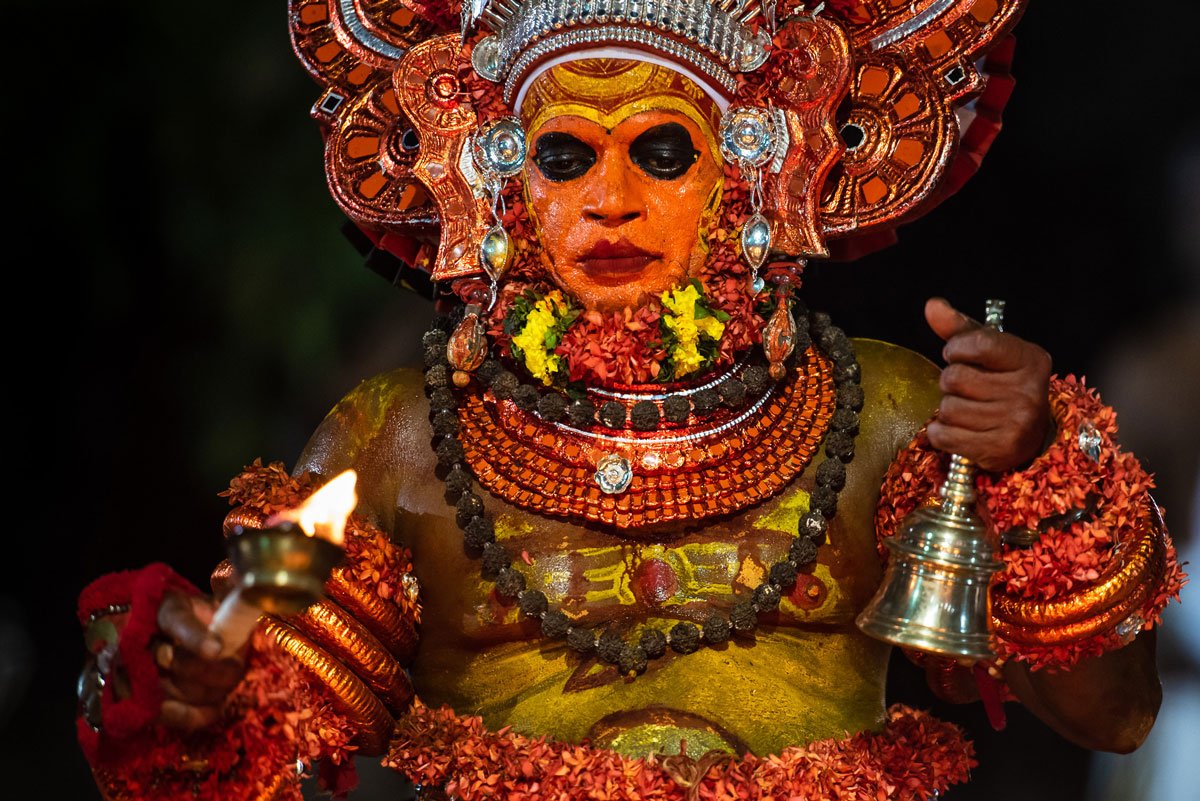 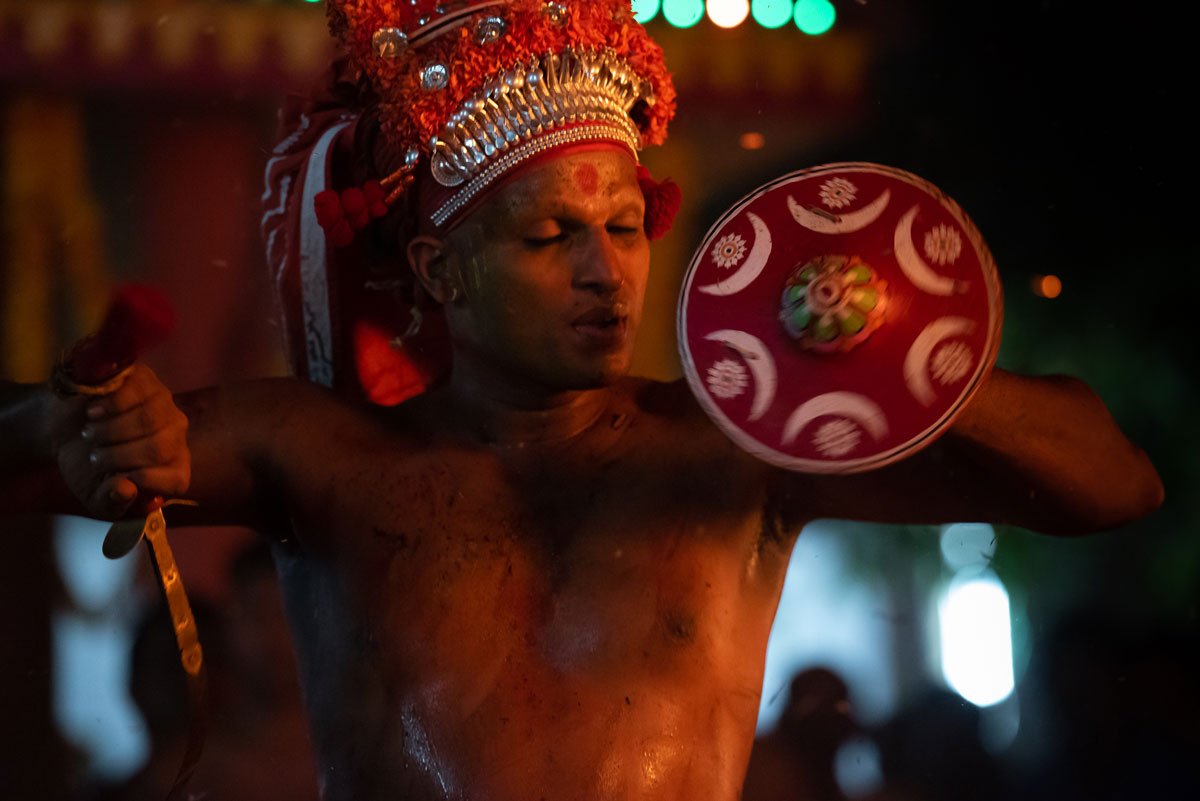 One of the longest and most popular of Theyyams is “Pottan Theyyam” in which the fully decked up artist dances around a mound of burning charcoal while repeatedly laying himself on the burning embers. The performer recites the folk story of how the Lord Shiva masquerading as an illiterate low caste labourer posed philosophical questions to the wise Hindu saint Shankaracharya who was unable to find reasonable answers. The story goes like Shankaracharya eventually had to apologise to the Lord and promised to consecrate several Shiva temples; and as a penance for his arrogance, he is said to have initiated this theyyam to celebrate the lord appearing in the form of Pottan Daivam. 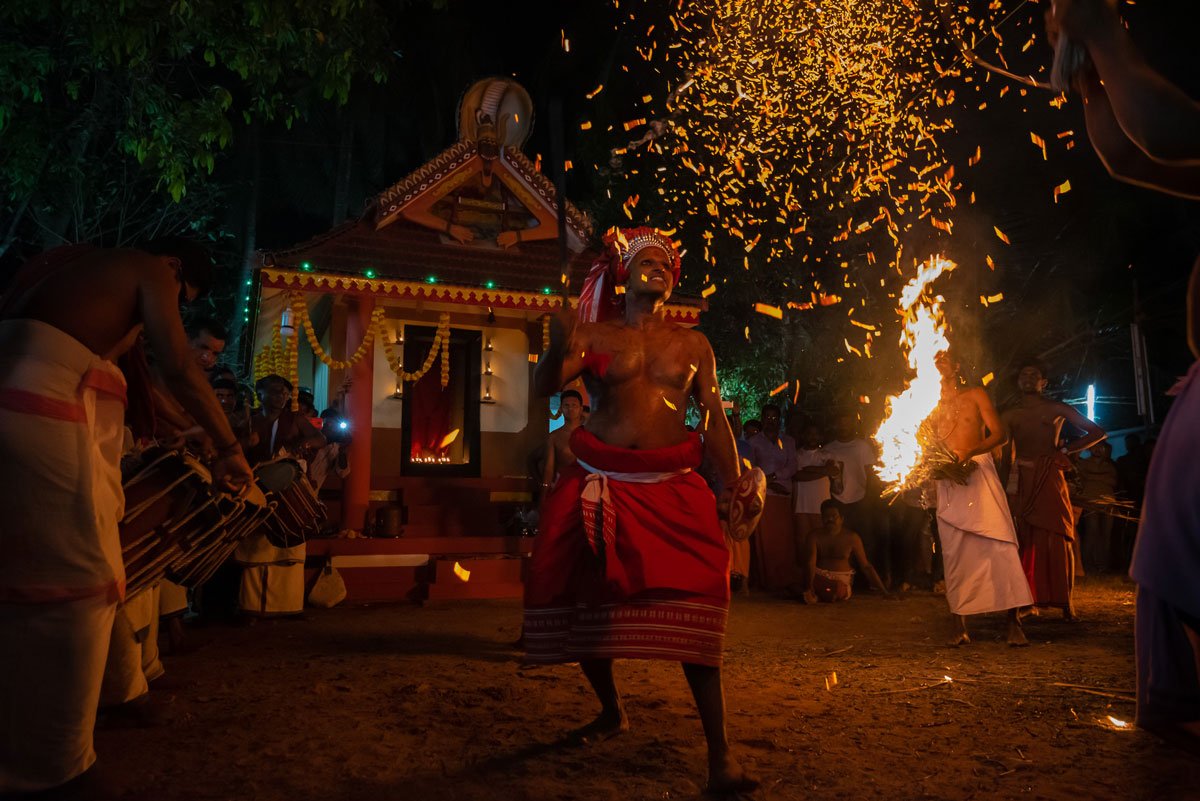 The tales are numerous and varied, as are the performances; but every single one is an exhilarating experience for the devoted follower and a visual treat for the photographer in search of a challenge. 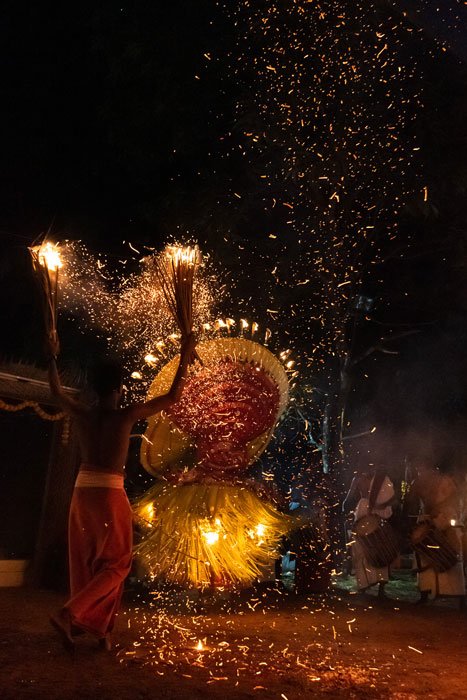 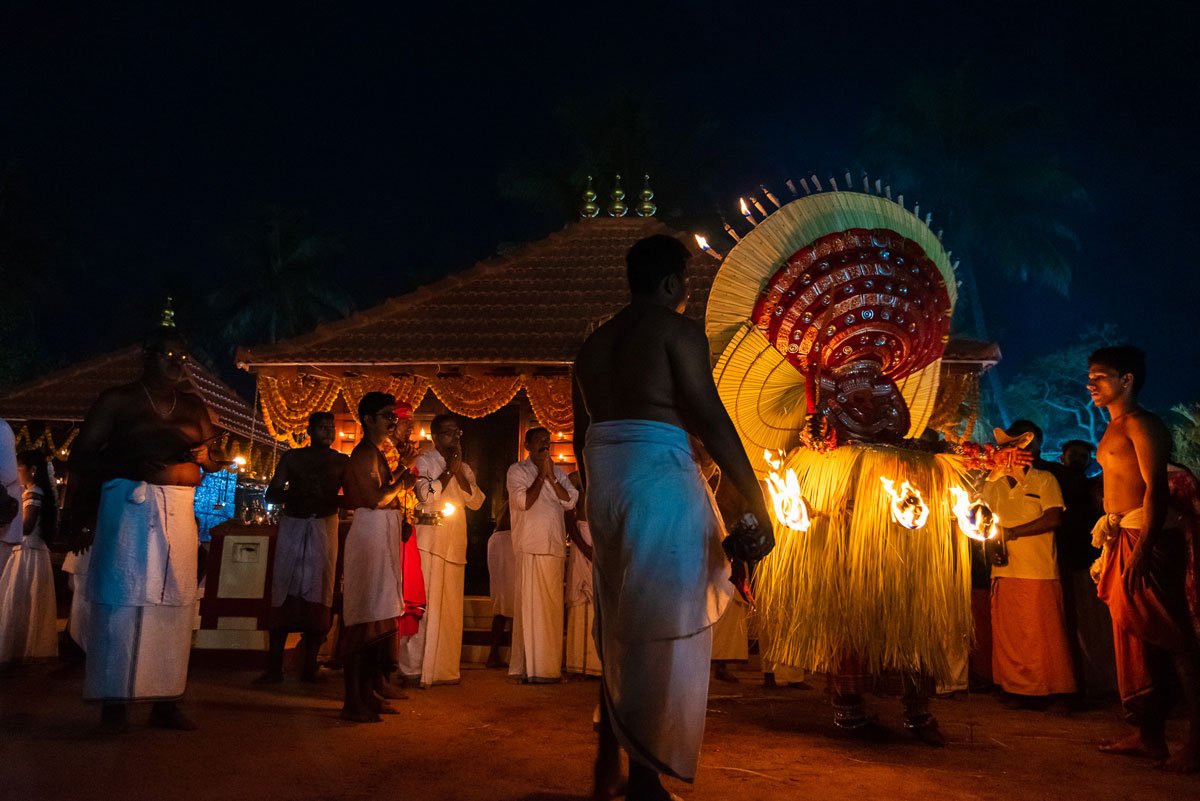 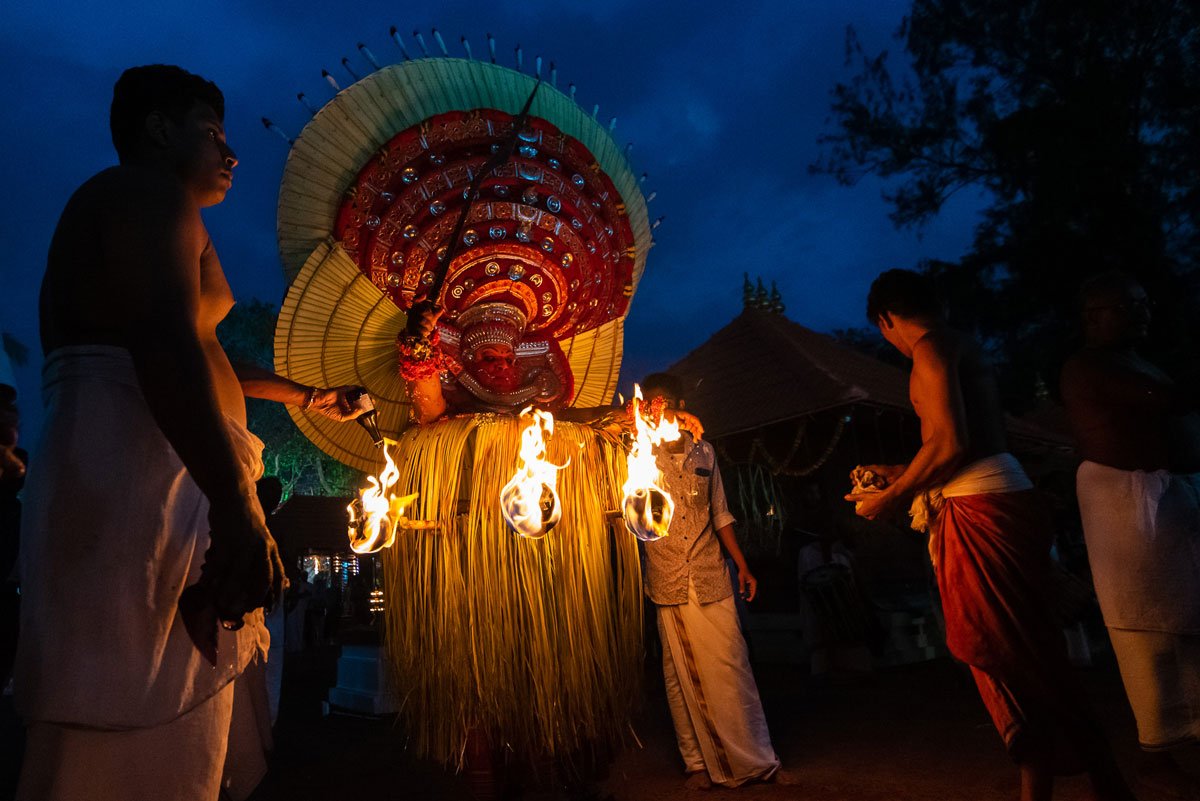 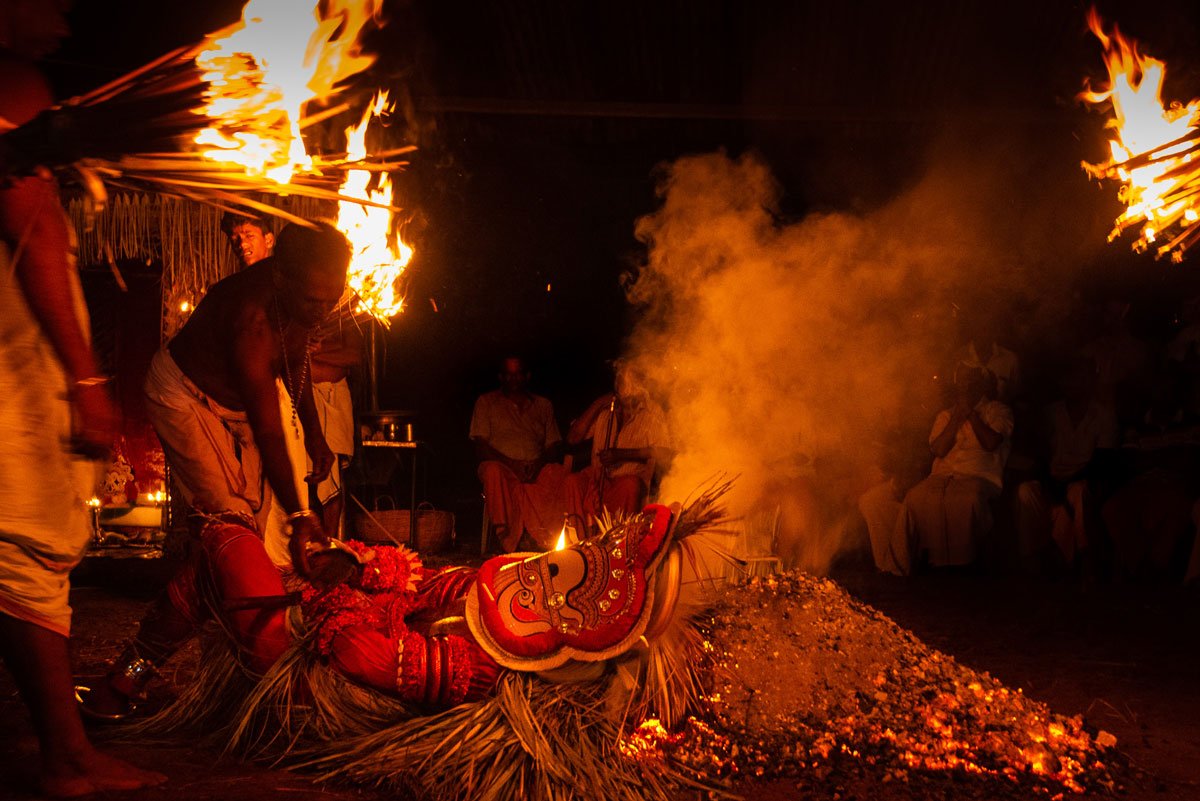 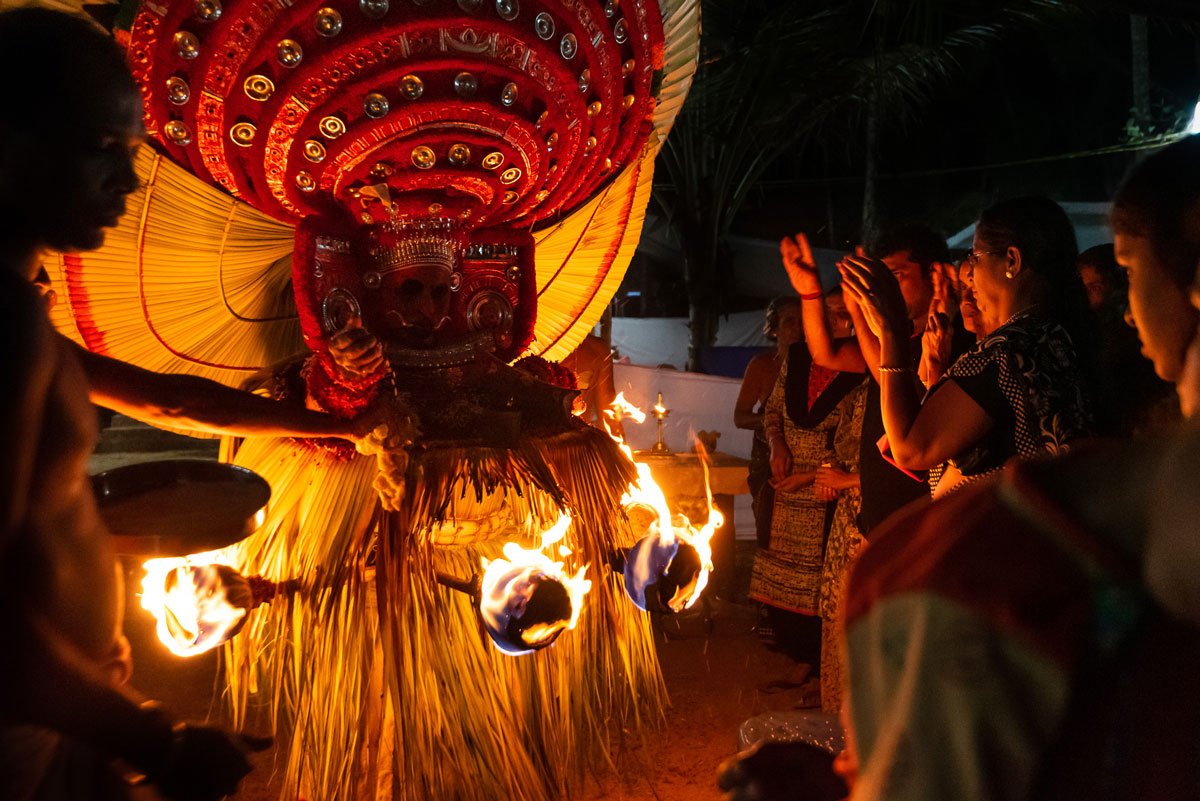 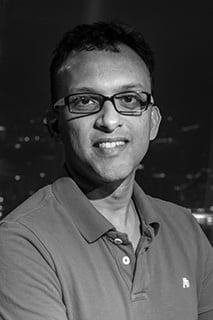 An urologist by profession and a photographer by passion, Sudhir is an Indian citizen hailing from the south Indian state of Kerala, currently working as the lead endourologist at the military hospital in Muscat. He started with photography in the year of 2011 with nature and landscape photography but eventually he is trying to explore almost all genres of photography.

Over the years, his photographic work has been awarded prizes and recognition in several national and international contests along with various publications on renowned platforms.