The Dying Art Of Dyeing

With the modernization of power loom, the ancient art of dyeing is literally dying. Weavers are leading a difficult life and the situation will not change until the handloom sector is supported.

Master Dyer Abdul Rashid is more than 80 years old devout man and his most precious possession is a holy book. Like most other holy books, it is frayed from a lifetime of daily use, its fragile pages held together more by faith than by thread. But unlike most holy books, it is not acquired. It is created by its owner, page by page, over seven decades.

Abdul Rashid’s holy book is the Master Reference Book of Colour Codes. One that he started putting together back in 1942, the year he embraced the traditional Kashmiri art of dyeing – as his religion. It was a time when the art was in full bloom, helping countless Kashmiri families earn their bread. But today, like most businesses handmade and heartfelt, this one too is withering.

The slender artist-hands of Abdul Rashid were strong and supple then, and the fingers that caress the pages today are frail. But his devotion has not diminished with time. In fact, it has grown, as he has passed on the passion to his eldest son, Naushad – the joy of bringing dull yarn to life, watching it go on to become celebrated shawls and carpets, travelling around the world, lighting up lives, spreading the splendor. While Abdul Rashid sits hunched in a corner of his workshop, with a book in hand, reminiscing. That’s how Jayati found him when she entered his workshop on a cold autumn morning.

‘Abdul Rashid & Sons’ sits on a quiet bylane of old Srinagar, next to an old burial ground and mosque. As Jayati entered the dark, warm cavern, she was greeted with a meditative silence. And the austerity of the place makes it feel like a place of worship. Even though there hangs a delicate irony in the air – that of breathtaking colours being born within unplastered walls.

During the course of the day, the silence is broken by various gentle sounds of water – gurgling, trickling, and pouring – as Naushad and his young apprentice go about the painstaking steps of dyeing yarn the forgotten way. Jayati heard songs playing on the young apprentice’s mobile phone – folk songs which speak of the beauty of the valley and Sufi qawwalis which speak of the beauty of Allah’s creation.

It’s mid-morning and the process of dyeing begins. Jayati was told that it would take all day to dye just two rolls of yarn. It begins with washing, as Abdul Rashid likes to say that the dyeing will be pure only when the yarn is pure. One must first be emptied of all impurities to be filled with true beauty.

After the cleaning is done, Naushad mixes powdered colours in water heated in an ancient copper urn. The colour is sprinkled, bit by bit, with care and precision, for the water to take in the dye evenly. Then the yarn is wrapped around thick wooden sticks, dipped and rolled gently in the hot water, for the dye to spread uniformly. This takes hours. This is when the yarn gets transformed from within, and such deep transformations cannot be rushed. Once the dyeing is complete, Naushad takes out a thread and dries it over the fire, to test the colour. Then he shows it to Abdul Rashid for approval. If the father and son are satisfied, the process is complete. If not, corrections are made, by giving the yarn more time, more pigments, or some bleach.

Abdul Rashid believes that every yarn is capable of greatness. It’s just that some need a little more love or a second chance.

The colour has come out perfect and she thinks it’s over, but it seems the most important thing is yet to be done. And fittingly, it’s Abdul Rashid who does it. Taking a finished thread, pasting it onto a fresh page of the holy book, and then writing all the details with his wavering hand. As if it’s very important to put on record that the hand still listens to the heart. And that is the dying art of dyeing. Practiced with undying love, for twelve hours a day during cold autumns and freezing winters. When demand falls with summer, the hours reduce to ten. But what doesn’t reduce is the commitment with which Abdul Rashid, Naushad and the boy go about their faith.

Sometimes, angry slogans jolt the sleepy lane awake, or curfews make it difficult to carry on. But Abdul Rashid & Sons don’t allow the unrest to invade their place of worship. Their only jihad is against the changing times that settle for mass-produced dyed yarns that lure shawl and carpet makers with speed in exchange for quality.

But why should one take so much pain when people don’t even think of colours when they see the shawls or the carpets? Don’t they all only care for the weaves and the craftsmanship? Abdul Rashid squints his eyes at the question. Then he looks out of the high window at the dying sunlight and says that nobody notices the light of the sun, but everybody is warmed by it. The metaphor seems ill-chosen, and the unsaid hangs in the still air – the day is dying, and perhaps the sun won’t rise again on the family business.

And the silence is broken by the evening prayer that begins in the neighborhood mosque. Reminding the faithful. 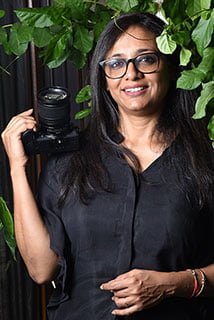 A split second storyteller, tells stories without saying a single word, photo-artist Jayati of Kolkata, India amazes with her frames of nuanced light and shadow. Exhibited and owned worldwide, Jayati is a much-in-demand artist, teacher and competition judge. Jayati’s extremely sensitive eye has captured moments glistening with human emotions and her forte is seeing the unseen and the unnoticed. In 2014, Jayati travelled to old Srinagar, Kashmir to document the ancient art of dyeing, and this story was first published by “People’s Archive of Rural India”.